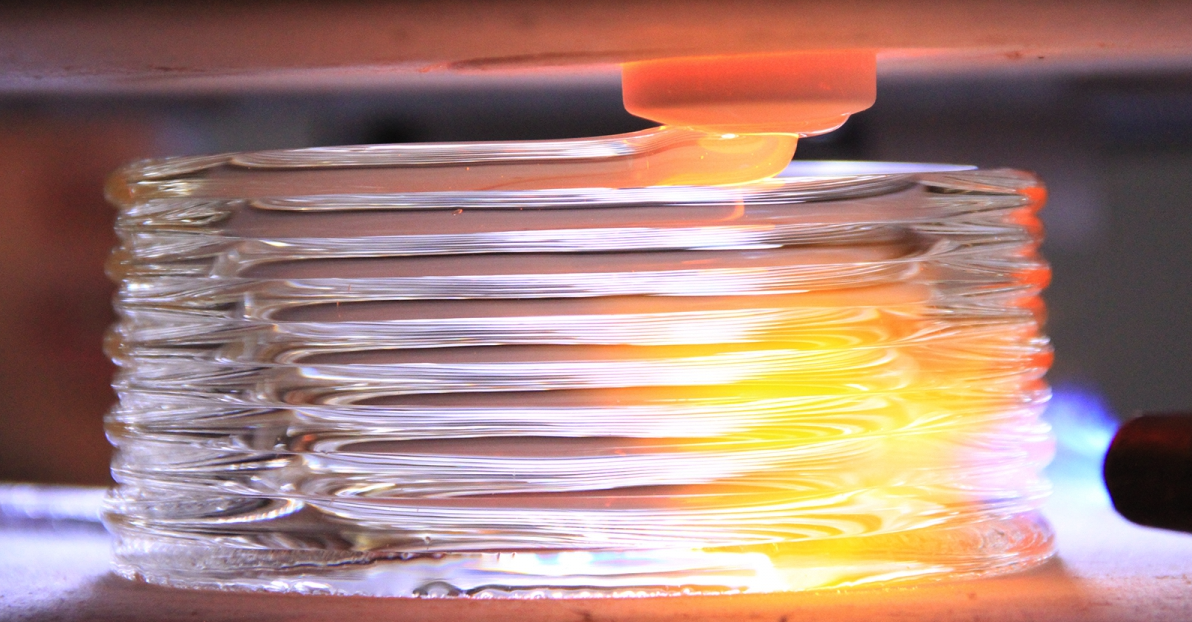 The 3D molten glass printer developed by MIT can create a diverse range of objects by pouring a stream of hot glass.

Glass, one of the most useful materials at our disposal but one of the hardest to handle, has been a final frontier of sorts in the world of 3-D printing. Even as approaches to printing materials like plastics, polymers, wax, ceramics, and metals, have been increasingly refined, glass has been mostly relegated to crude attempts to form with digital printers that approximate a glass effect. That may be about to change. Driven by the transformative potential that 3-D printed glass could have in art, architecture, medicine, aerospace, communications, safety and security, and more, researchers and engineers, are making progress in overcoming the inherent obstacles to 3-D glass printing (3DGP). Years' worth of experimentation and invention has led to the groundbreaking innovations we have seen this summer - Micron3DP, an Israeli company that designs and manufactures 3-D printer parts, announced a prototype of a new high-temperature extruder printe in June, and MIT recently announced the 3-D hot glass printer developed by the Mediated Matter Group in collaboration with MIT's Department of Mechnical Engineering and MIT's Glass Lab.

Despite sounding like something out of a Jetson's cartoon, 3-D printing, also known as additive manufacturing, has been around in some form for over 20 years. Early printed glass often turned out murky and opaque in color with a grainy texture because the raw material was powdered glass, which tends to form air bubbles when fused. This is not necessarily a deal-breaker for the glass artist, but it is not conducive for architectural, medical, or spacecraft purposes where optical quality must be top-notch. Notable progress in printing glass occurred in 2009, when the Solheim Rapid Manufacturing Laboratory at the University of Washington shared their Vitraglyphic printing process. Their printer meticulously applies a binder ink to a specially-formulated mixture of glass and adhesive powders to form an object, which is then sintered in a kiln. Color improved, but transparency was still an obstacle.

Since the buzz around vitraglyphic printing faded due to the limitations of the results, the focus has shifted to Fused Deposition Modeling (FDM), commonly used to print plastics, ceramics, and some metals. In an FDM printer, the material is fed through an extruder, melted with a component aptly-named the hot-end, and laid down layer-by-layer, in coil pot-like fashion, to realize a design. FDM hasn't been possible with molten glass in the past because the typical hot-end is limited by its maximum temperature of 350-615 degrees Fahrenheit. Micron 3DP's recent breakthrough allows them to offer a new line of all-metal extruders and hot-ends that are capable of reaching temperatures up to 3,000 degrees Fahrenheit, enough to print even borosilicate glass. Micron 3DP is currently hoping to attract a strategic investor to fund their research and take their glass-melting parts beyond the prototype stage. With the right investor on their side, their printers could become the industry standard in 3DGP.

Meanwhile, a collaboration between departments at MIT has completely eliminated the need for the extruder and hot-end. MIT Glass Lab Director Peter Houk explained in an email exchange with the GLASS Quarterly Hot Sheet that their dual-kiln machine is a 2,000-degree Fahrenheit electric crucible that releases hot glass from a nozzle into a annealing chamber below. The top crucible, mounted in a carriage, moves along the x and y axis, while a plate in the lower kiln moves along the z axis, spanning a wide range of movement and resulting in a variety of shapes. Once the object is finished printing, it is simply left in the 900-degree bottom kiln to anneal.

In a 2014 article in MIT News, Houk said that printing glass directly from a hot furnace is one only a glassblower would have come up with - and in a way, a glass artist already had. Ten years earlier, Mark Peiser poured hot glass from a furnace on the second floor of his studio into a mold turning on the ground floor to create his "Cold Stream Cast" series (2004). Glass that is 3-D printed by FDM is aesthetically comparable to the work in Peiser's series, but they are hardly one and the same. Peiser's work was a manifestation of his appreciation for the natural properties of hot glass that attract many artists to the material. As stated on his website, he was fascinated by "the inherent tendency to create repetitive line patterns", and his work sought to "record the history of this essence of material." Exploring its elasticity, the ability to fuse to itself, and to settle into a form as it crosses the line between liquid and solid, he saw his "Cold Stream Cast" series as a collaboration between himself and the glass, one in which both had a voice and the glass could retain some freedom in its movements while being loosely lowered into a mold.

3DGP, on the other hand, is far from collaborative. Instead, a computer-controlled set of movements replace glass techniques that take artists years to master. Temperature, shape, diameter, and movement are all controlled according to a binary sequence.  Using the same type of glass found in a typical glassblowing studio, MIT was able to harness the same characteristics of molten glass that intrigued Peiser, achieve transparency, and reap the benefit of immediate and exact reproduction. It also allows for an unparalleled level of self-reliance in the process. “This alternative frees us from requiring specialized feed material and enables us to process large quantities of glass quickly,” Houk says. “All of this is of particular value for our team given that we are targeting the production of medium- to large-scale parts anywhere from a few inches in size to a few feet.” Currently, the development of a second-generation printer is in the works, which will only increase the diversity in the shapes and scale of MIT's objects.

Even with the breakthroughs of Summer 2015, 3-D printing technology is still in a primitive stage. From our current point in history we can expect that the future will see more than one way to execute digital glass printing. As it has been since the beginning of the Industrial Revolution, we may see current parts, processes, and even entire machines fall out of favor as equipment and methods advance and become cheaper, faster, more efficient, or specialized for certain applications. For now, as this summer draws to a close, it is clear that Micron3DP and MIT is moving 3DGP one step closer to a viable reality, and their work will influence what happens next in this exciting field.