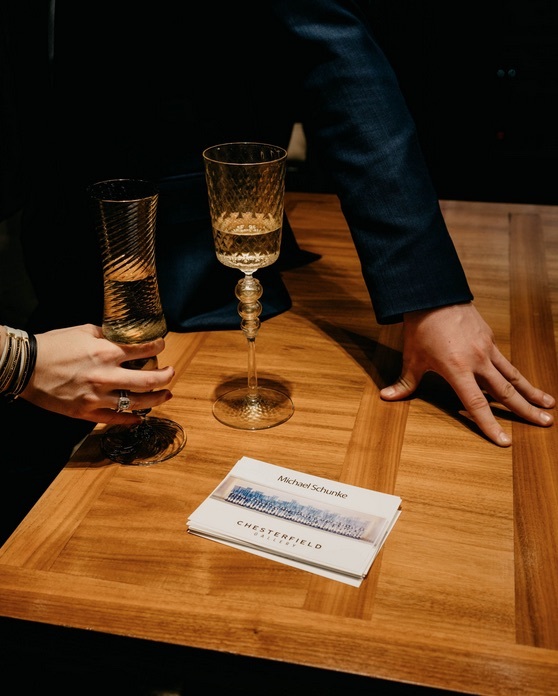 After several years running a bricks-and-mortar gallery on New York City's Lower East Side, art dealer Simon Abrahms is exploring new way of promoting artists working with glass. He recently hosted a social event at his work-and-live space on the city's Upper East Side that brought top American glassblower Michael Schunke to Manhattan to showcase his one-of-a-kind glassware. Rather than putting the works on pedestals, the glasses were all available to be used as drinking vessels, underscoring that they are durable, and suitable for function as well as visual appreciation.

"This was the first event in a new series of wine, cocktail, and dinner parties that we'll be doing," Abrahms told the Glass Quarterly Hot Sheet in an email exchange. "Showing people the work up close and in certain cases allowing them to touch and interact with the work like we did creates a different relationship with glass. People are often hesitant to touch such beautiful things, but this type of setting encourages people to enjoy these objects the way they were meant to. Exclusive invite-only events to enhance the understanding and appreciation of glass are part of how we're dealing art differently than when we had our retail gallery space on the Lower East Side."

For Schunke, having a wide range of his work out for attendees to choose provided insights into the aesthetics of his designs, and he observed how each had to overcome the tradition of not touching art objects. It took a bit of encouragement, but soon everyone was holding a glass in hand, filled with either wine or sparkling water. "It kind of provided this moment of tension and curiosity, because people chose from a few dozen glasses laid out, mixed colors and styles on the long dining room table," he told the Hot Sheet in a telephone interview. "It was great strategically because it showed people you can acquire them and actually use them."

Schunke was gratified that not a single glass broke because it reassured potential collectors that you can take these down from the shelf and really use them as drinking vessels.

Abrahms, who is planning to continue to explore new ways of mixing art dealing with social events, said that the novelty of drinking out of these one-of-a-kind vessels helped to create an atmosphere of adventure as arriving guests learned they would be drinking out of art objects: "... their eyes lit up as they walked in and were asked to choose their glass. This sparked conversation among the party about why they chose the glass they did; color, shape, how it felt in their hand. As the party went on, people chose to buy glasses the glasses they had chosen as well as ones other people were drinking from, which was another fun way people complimented each other's tastes. I very much look forward to our next event and encourage glass enthusiasts to email us for an invitation."

Schunke says he had hoped sales would have been stronger, but he was satisfied that connections were made, and that relationships with new collectors take time to develop. Overall, he was satisfied with the February event's success and is looking forward to the next one.

"I spoke with a woman from Architectural Digest at length, walking her through how the glasses are put together in a classical type of way, how they look classical but they’re not made in a classical method of how they might be done in Venice," Schunke explained. "While I'm not trying to put down Riedel, when they realize Riedel is mold blown and cut, they’re kind of bummed. When you get one of my glasses, you’re getting the hand of the maker, not a mold and a caliper, and I think the people who are paying attention at events like what Simon put on, that’s the beginning of the experiential acquisition. It's not 'I went to Wiliams-Sonoma and ordered Riedel glasses and they’ll be here in two weeks.' Especially younger people want an experience with their acquisitions, and that experience is what can separate what we do from buying a set of glasses online or at a chain store."