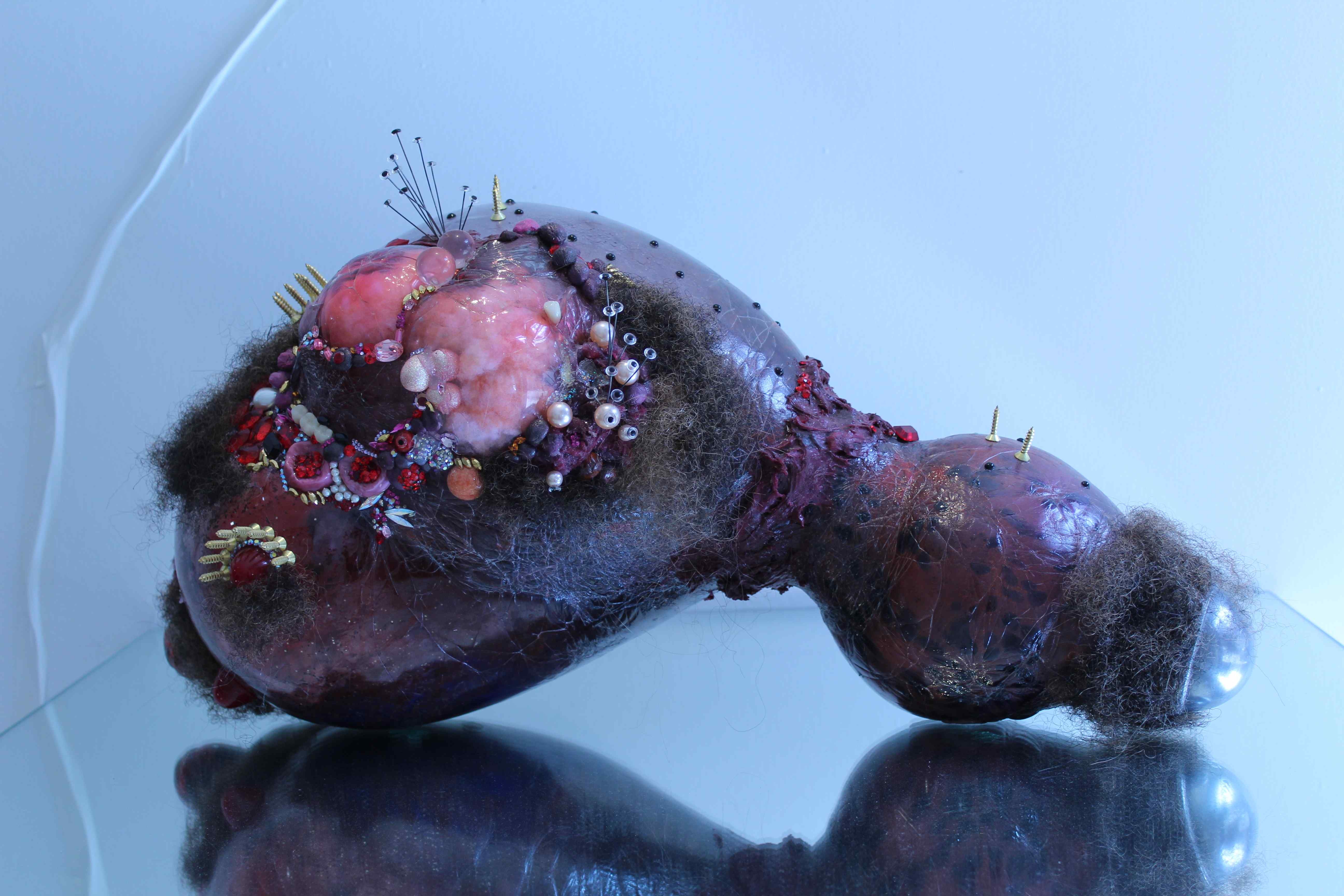 Doreen Garner's exhibition "Doctor's Hours," on view in New York City gallery through June 18, 2017, is an assemblage of drawings, video, and sculptural specimens that blend revulsion and attraction to provoke inquiry into atrocities inflicted on African American research subjects in the name of science. Most visceral is the response to the eerily intestinal yet abstract creations made from careful combinations of petroleum jelly-smeared glass, silicone, crystals, human hair, condoms and glitter, perched on shelves at nearly eye-level, spot-lit in the darkened pop-up gallery space on New York City's Lower East Side. Garner, who is often present in the gallery space, plays the role of both artist and surgeon as she invites her audience to become literally one with her art by receiving an actual tattoo, which she will administer either by appointment or for those inspired by their walk-in visit. 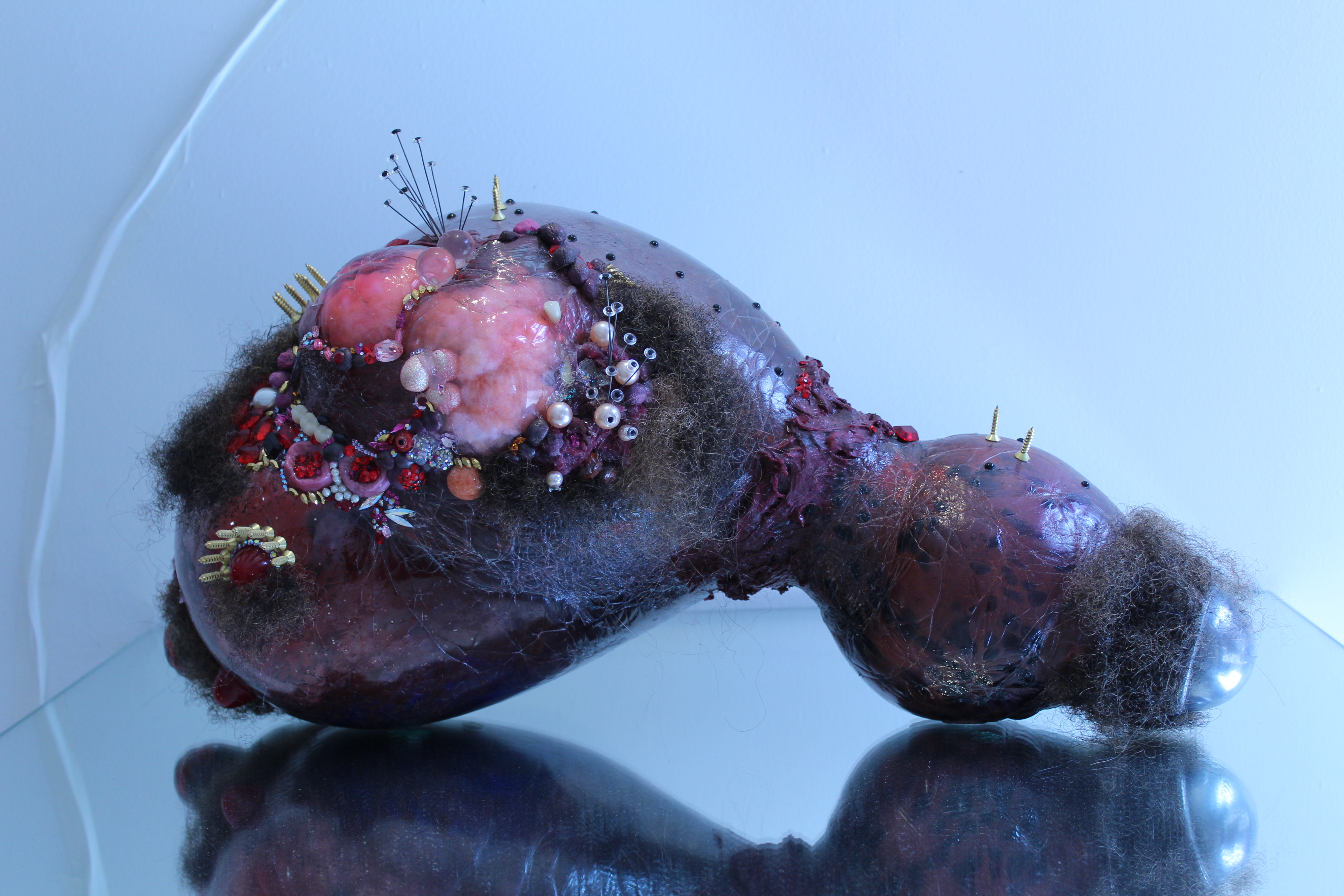 Many of Garner's sculptures resemble stomachs, livers or uteri that one day sprouted hair, and pimples and tumors of crystals and pearls. Her obsession with deformity is clear, but the viewer is caught between beauty and disgust by the assembled works designed to induce revulsion, but also to intrigue, leading to an expanded knowledge of the strained relationship between medical and racial history.

Her drawings follow the same pattern. One is amazed at the intricacy necessary to accurately depict the functions of the human body, and upon closer inspection notices golden teeth on a severed mandible, or a colorful manicure on a skeletal hand, the startling juxtaposition between decay and decoration, between internal and external, are designed to attract and repel, bringing up issues of racial identity, nonconsensual medical research, and the extensive, violent relationship between the two throughout history. 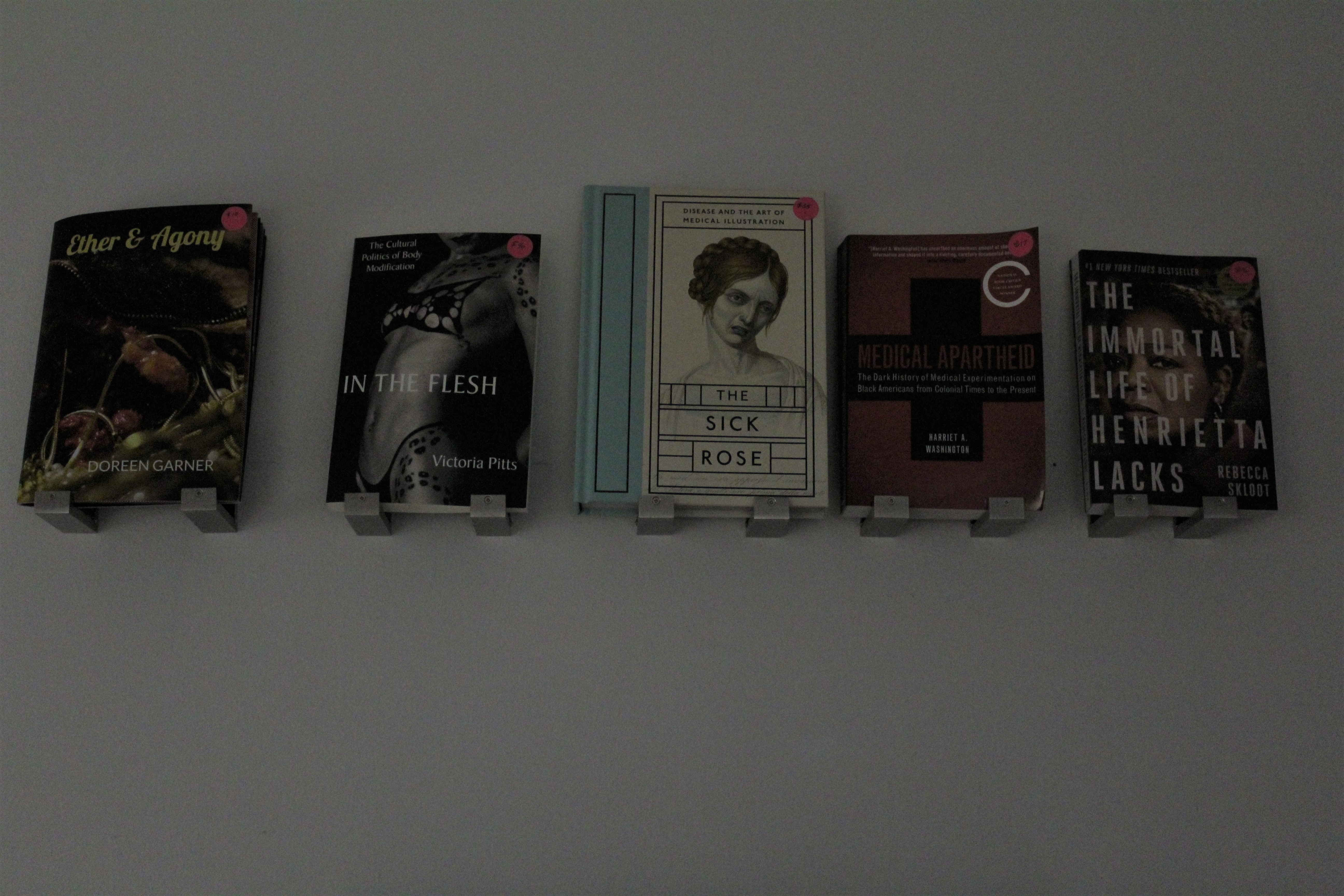 In the back room, there is a small library above a glass box encasing a half dozen pairs of earrings made to look like tissue samples preserved in vials of formaldehyde. It includes titles such as Medical Apartheid by Harriet A. Washington and The Immortal Life of Henrietta Lacks by Rebecca Skloot, reminding the viewer that these works serve to bring attention to the suffering undergone by African-Americans upon whom medical experiments were conducted without their consent. Henrietta Lacks is referenced directly in Garner’s keystone sculpture Reliquary for Henrietta: a golden skull resting face-up on a red pillow of hair-covered flesh, a vial containing her immortal cells clenched between her teeth. Other titles include The Sick Rose: Disease and the Art of Medical Illustration by Richard Barnett and In the Flesh: The Cultural Politics of Body Modification by Victoria Pitts-Taylor, both of them relevant to the media of the exhibition as well as the cultural implications that they aim to communicate, such as, in the case of Victoria Pitts-Taylor, the relationship between body modification and gender, sexuality and ethnicity. The inclusion of Barnett, on the other hand, invites the viewer to further explore the links between beauty and disease, deformity, and the administration (and ill-administration) of medicine, and the ways in which medicine can take on beautiful forms, even when depicting something gruesome.

Garner’s work is ugly on purpose, yet beautiful for it’s rawness. It is impossible to look away, and the disgust at the atrocities which these works represent lingers, and haunts the viewer long after they've left the Lower East Side.