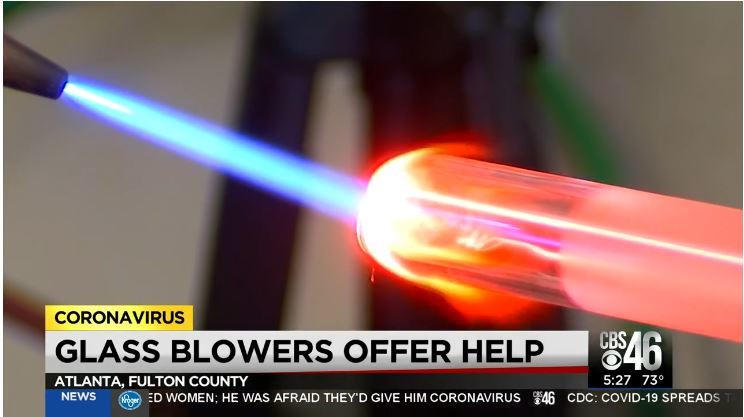 A still from a news report from Atlanta about local glassblower Carson Pennella work to make a glass T-splitter.

Flameworkers from around the U.S. and the world have coalesced through a Facebook group to discuss a collaborative initiative to hand-make borosilicate splitters that would, in theory, allow multiple Covid-19 patients to share a single ventilator to address the potentially catastrophic shortage of such medical equipment as the pandemic overwhelms hospitals around the world. The idea was the brainchild of Joshua McMenamin, a Boulder, Colorado, flameworker, who came across a 2006 article in the Academic Emergency Medicine journal about the possibility of sharing a single ventilator with up to four patients in a dire emergency. The technique was used successfully during the Las Vegas mass shootings when one hospital was overwhelmed with patients. McMenamin, who the Glass Quarterly Hot Sheet was unable to reach for comment, was featured in a local television news program, and quickly gained support of the community of glassblowers through Facebook. On the COVMD Glass Medical Devices Facebook group, flameworkers from around the globe have been crowdsourcing diagrams and schematics, as well as sharing the results of their outreach to hospitals. The effort has been fueled by the enthusiasm of volunteers to turn their home studios into emergency manufacturing sites.

Though the all-volunteer army of glassblowers stands ready at their torches to make the agreed-upon connector that would allow a single ventilator to be shared by up to four patients, a 3-D printed solution that has already received FDA emergency authorization seems to be gaining momentum. The South Carolina-based nonprofit health system Prisma Health has released 3-D printing source code and specifications for a trademarked device it has developed called VESper, which can connect up to four patients to a single ventilator.

New York City glassblower William Couig who worked his network connections to reach a doctor at New York Presbyterian hospital heard that the facility is already starting to 3-D print the device in the event of a shortage.

Whether or not smaller hospitals that lack 3-D printing capacity might still need the device, or if glass turns out to be preferable to plastic for its ability to be sterilized in an autoclave, the next steps remain to be seen. But one thing is clear: the flameworker community stands ready to mobilize to help in an emergency situation.