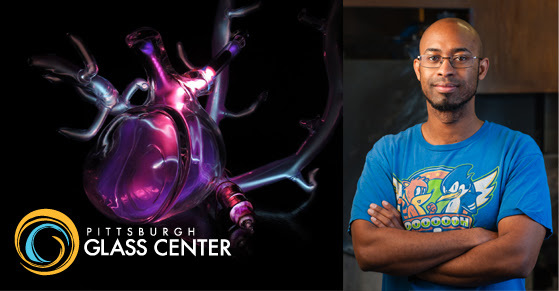 Percy Echols II is the first recipient of the Ron Desmett Memorial Award for Imagination in Glass established by the Pittsburgh Glass Center (PGC). Founded in memory of artist Ron Desmett, this award is given to an emerging glass artist that challenges conventional understanding of the medium and shows great potential in the same vein as the late co-founder of the center. Then a painter and ceramist, Desmett didn’t start his glass work until a year after opening the PGC with his wife Kathleen Mulcahy, a glass artist herself, who in 2002 asked artists from other materials to “think in glass.” Thus tasked, he began blowing opaque black glass vessels shaped inside hollowed out tree trunks which pushed the envelope of the previously polished and pristine glass vessels, embracing the notion that nothing is impossible and that glass doesn't have to be beautiful to make a powerful statement.

The award celebrates Desmett’s legacy and hopes to inspire others to reach new heights in their own practice, encouraging exploration and risk-taking to create something unique with the support of the Ron Desmett Artist Fund established by Mulcahy. After receiving 51 applications from around the world, Echols was selected for his work in plasma and plasma neon. He is passionate about the alchemical and scientific application of excited gases and the use of specialized equipment used in neon. He sees plasma and neon as a new venue through which to engage the viewer's sense of touch through glass, since the soft glow of the plasma responds to the viewer's proximity and touch.

An independent contractor and neon lab tech, Percy Echols II grew up in Bloomington, Illinois, and attended Illinois State University where his initial foray into the art world was through graphic design. He took his first glass-blowing class in college on a recommendation from one of his friends. After graduating with a Bachelor of Fine Arts and a Bachelor of Science in Glass, he has visited and studied at the Ox-bow School of Art and Artist’s Residency, the Pilchuck Glass School where he was first introduced to plasma in 2014, and the Pittsburgh Glass Center where he developed the first mobile neon lab. In 2017, he launched a blog and podcast, the "Taming Lightning" project, to connect to a wider plasma and neon community, building networks, sharing ideas and conducting research.

Awarded to this artist who embodies the innovative characteristics of Desmett’s work, Echols will receive $2,500 (US) cash prize as well as 12-months in the PGC’s studios to create a new body of work beginning in September 2018. Echols writes after receiving this award of his “gratitude to and for the Pittsburgh Glass Center and its community for their support. Something that can easily be taken for granted.” With this award he plans to continue his plasma and neon education, to make new work in order to dispel the novel associations of plasma globes and neon signs, and to develop a space in which to explore this new medium.