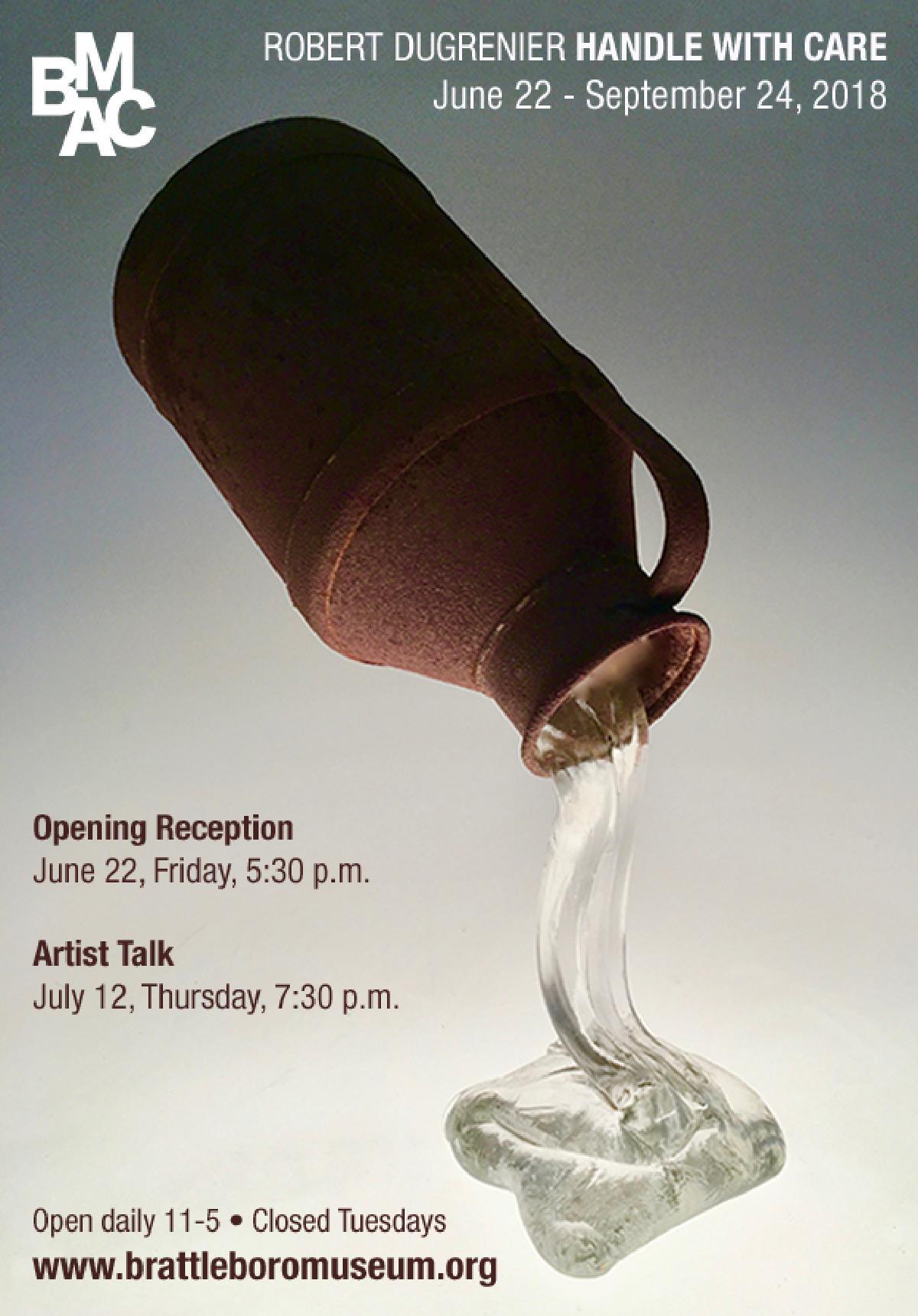 Perhaps it's the fact that hot glass must be manipulated with implements but artists sculpting in glass seem uniquely drawn to hand tools as a subject. With his latest body of work featured in the exhibition “Handle with Care” opening this Friday at Vermont's Brattleboro Museum, Robert DuGrenier joins Mary Shaffer, Rick Beck, Lou Lynn, and others in exploring the nature and meaning of hand tools by making them, in part, out of glass. (Disclosure: Robert DuGrenier is a board member of UrbanGlass, which publishes the Glass Quarterly Hot Sheet.) Expanding on his earlier series “Out of the Ashes,” in which he combined blown and cast glass with the remains of tools and farming implements in a therapeutic process after a fire destroyed his historic barn in 2015, DuGrenier's new work grants tools a second, more permanent life in glass. By manipulating the glass more intentionally to create potentially functional handles for ax and hammer heads as well as other farm equipment, he mines the rich dichotomy between fragility and strength, making the viewer question the functionality of the tools even as they consider the poetic beauty of their highly evolved forms that make them extensions of the human body.  In an exclusive telephone interview with the Glass Quarterly Hot Sheet, DuGrenier revealed insights into his process and approach.

Glass Quarterly Hot Sheet: How did this series of work begin?
Robert DuGrenier: Shortly after the bonfire, there were these big huge excavators on the property. The barn was totally decimated and they were taking the rubble away. A series of my favorite shovels and axes that I used at the farm were piled up but I wasn’t ready to release them yet. So they stuck the metal bits in a big pile and I took them to the studio and eventually started playing with them. I started direct casting over some of the pieces, kind of freezing a moment in time, and just playing with the beauty of that for that particular object. The pieces then over time became more intentional. I started to really analyze what these objects were, what they had been used for. I realized they had been used for centuries by various craftsmen and farmers, and my work became a memorial for that object. The barn disappeared, and the objects were going to go to their graves. I wanted to bring it back to life again and preserve it, maybe not to be used because it’s not practical. I’ve made handles for the tools that function theoretically, creating a tension of what would happen.

Glass: I notice that there is an absence of color in this work, why is that?
DuGrenier: I don't think I was ready for the introduction of color. In fact, for part of the “Handle with Care” series we did experiment with color, and for some reason, they just weren’t as successful.

Glass: You have said of your past work that clear glass for you can be symbolic of tears and your own internal workings. Perhaps color would have diluted the emotional poignancy of these personal tools, which are powerful in their stark beauty. The clear glass allows for the overhead lighting that features each individual work to play a larger role in the installation. Do you agree?
DuGrenier: Well, the glass sort of comes alive under certain lighting conditions that make it resemble the fire. Beautiful patterns on the wall through the optic glass makes the object seem to have its soul projected. It’s radiating... The use and reference of fire, in the process of glass blowing and casting and in the installation through lighting is also a strong source of catharsis - to create something from that thing which destroyed the objects in the first place. The work was my therapy.

Glass: Can you talk about the presentation of the work?
DuGrenier: The large gallery is filled with about 26 pieces, all lit quite dramatically, and it becomes its own experiential installation. The tools are displayed to be reminiscent of how objects would be in a barn, ready to be picked up. The hammers are all hung similar to how you would hang them on a tool belt. Some of the hedgers and hoes are hung on the top edge of the gallery quite high, like off of a rafter. The installation suggests where they would be in a barn. It's also a bit thematic. Since I've been working on this series for about 2 years, it's a progression in how the pieces changed as I worked on them, starting with the early work where I've frozen a moment in time and ending with the objects that have become tools again.

Glass: Has this project got you thinking more about the evolution of these handle shapes and the function of tools?
DuGrenier: Through this project I've been rediscovering the design of a hammer, the form of a handle, the weight and the shape. A lot of thought was put into the potential function. I think a lot about the houses the tool built and the objects it has repaired, in turn celebrating the craftsmen who used it.

Glass: Does the title of the show “Handle with Care” indicate that they can be touched?
DuGrenier: No, while some of them can be touched I think it means that pieces are meant more to be touched conceptually, and the exhibit visually teases the viewer with the idea of what it might be like to smash the glass-handled hammer on a nail. Although I have to admit that I used one of the hammers to hang itself since I couldn’t find my actual hammer at that moment. But in fact, since I polished the surface you hit with to this almost mirrored effect, most of the tools are meant to remain in that perfect and polished state.

Glass: Will there be future exhibitions of your work with tools to come?
DuGrenier: I'm not sure how much longer this series will continue since I'm almost out of objects, having used just under 1,000. But I do have a few larger pieces of farming equipment such as antique metal wheels that I'm thinking of adding glass tires to and old hay rakes and one tiller that I'm going to start thinking about tackling. I also have my whole collection of blacksmithing tools that won't be shown in this exhibit. There'll be another show for them; I think the title for that will be "Glass-smithing." Eventually I hope to put them back in the barn. We've just received approval to rebuild and a week later this show opens - it's very serendipitous.