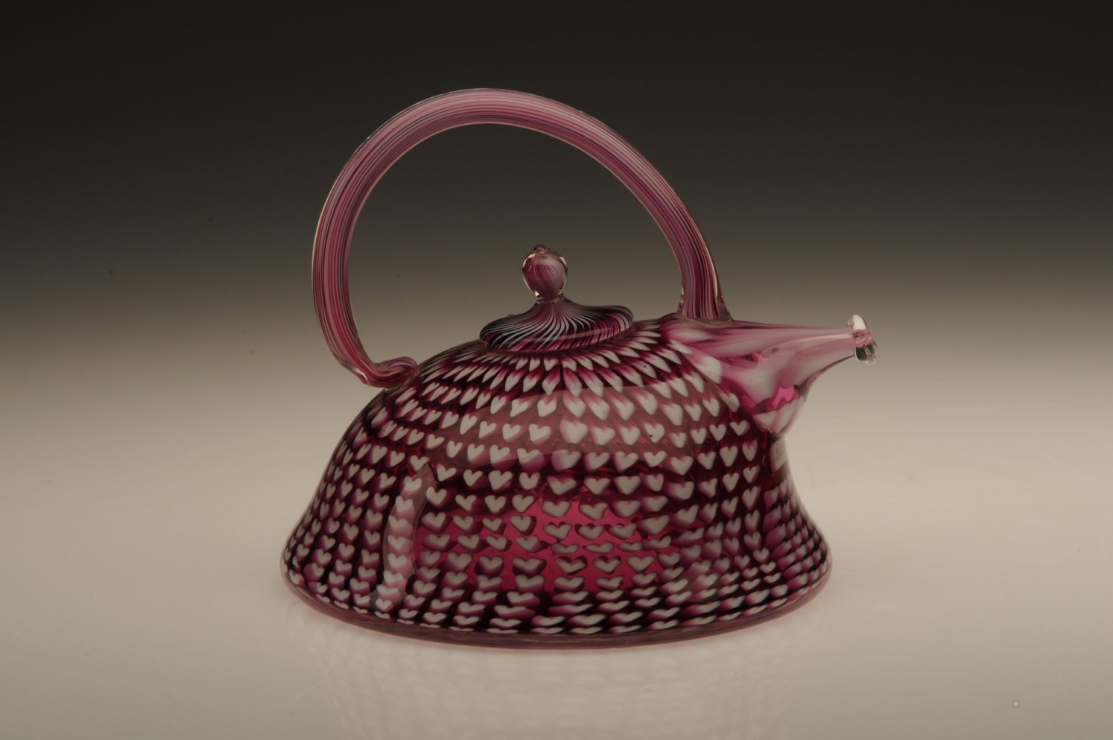 A glass dog perched atop a wooden anvil. Patterned pink teapots. A golden birdcage. Watercolor postcards serving as the backdrop of whimsical found objects.  All of the above -- and much more, with increasing variety -- are to be found at the Traver Gallery and Museum of Glass this month in two Marquis exhibits. At the Traver Gallery, on view through September 29th, both Richard and his painter and mixed-media artist wife, Johanna Marquis, display their work side by side in "Recent Works: New and Used." The gallery exhibition includes pieces both from their early careers and new works. And opening later this month at the glass museum in neighboring Tacoma, Washington, "Keepers" displays prized work draw straight from Richard Marquis' personal archives, spanning his decades-long career and providing insights into what the artist himself felt were among his most important and successful efforts.

Dick Marquis is an icon in the field of glass art, and has been creating intricately-patterned work since the 1960s. He's known as a pioneer of traditional Venetian murrini and cane techniques, and is widely credited with being among the first to bring those Venetian methods to America, albeit with his own unique twist.

“Marquis was one of the early glass artists we exhibited,” William Traver told the Glass Quarterly Hot Sheet. "He had a very large influence on everyone here."

Beyond his pioneering technical abilities, Marquis is known for a style that's utterly his own. Some of his earlier works are from what Traver calls Marquis' "hippie era" have informed his overall style: "He was doing these funky works that would address war and peace, and things like that, using those aspects of his work. When you look at his work, you can definitely see the influence of that period.” There is an interesting tension in all of Marquis's work -- the impeccable technique married to a decidedly irreverent aesthetic, with clear connections to California's funk movement, a regional phenomenon in Northern California in the 1960s.

Marquis was an important pioneer in American glass art, and one of the most accomplished in the murrini technique long before Lino Tagliapietra shared techniques starting with a 1979 class at Pilchuck. A decade earlier, Marquis had traveled to Murano, Italy, where, as a 1969 Fulbright fellow, he spent a year as a guest designer at the venerable Venini factory, one of the few Muranese factories that invited international visitors. Marquis was able to bring back knowledge of the technical processes used by the masters there to create intense patterns on blown glass vessels.

The purpose of these two shows is to exhibit that style and celebrate the influence Richard Marquis has on glass art.

Additionally, both shows aim to portray Marquis and his work through a personal lens.

"Both the exhibition and its accompanying catalog unfold through Marquis’ personal archive of artwork, and the commentary of friends, mentors, family members, and artists who knew him best," Museum of Glass curator Katie Buckingham said about the show "Keepers." "The memories and stories from those who know him best make for an exhibition that is infused with Marquis’ personality, sense of humor and showcases his incredible acumen in glass."

Choosing to hang Johanna's work alongside his in "New and Used," the Traver Gallery adds a personal note to the career reflection: “It shows the influence she had on him and he had on her, and they really work beautifully together.”

On a personal level, Dick Marquis told Glass Quarterly HotSheet: "I don’t actually like looking at my own work, but it was fantastic to see Johanna’s paintings and constructions on the pristine gallery walls."

Their work together, and the overview of Dick Marquis' career, is not to be missed.