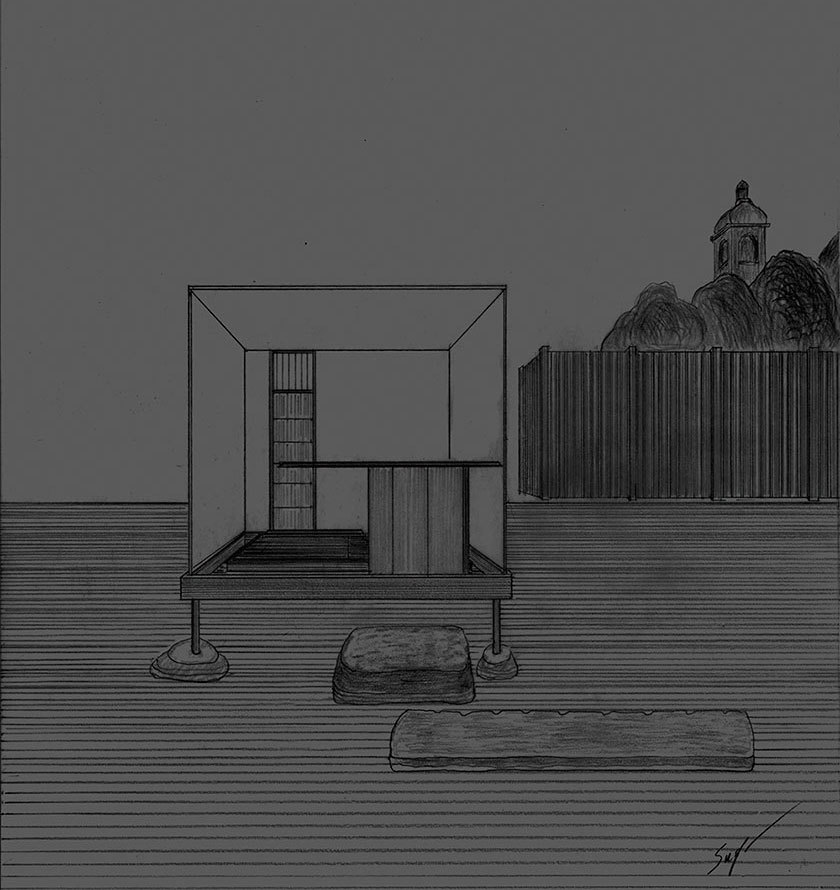 A rendering of Hiroshi Sugimoto's glass tea house that will open on the island of San Giorgio Maggiore in Venice.

Noted Japanese photographer Hiroshi Sugimoto will be making his first foray into the third dimension with his installation "The Glass Tea House Mondrian," which will open to the public on June 6, 2014. As part of the activities of Le Stanze del Vetro, the temporary pavillion will grace the Island of San Giorgio Maggiore in Venice, Italy. The pavilion consists of two main elements. The first is an open-air landscape, which will feature a reflecting pool and a path, which leads visitors to the second: an enclosed glass cube. Roughly eight by eight feet, this space will play host to regularly performed Japanese tea ceremonies. With roots winding as far back as the sixteenth century, this ritualized custom has transformed from simple hospitality, to an art form all its own.

In the invitation to the exhibit's opening, Sugimoto empahsizes this, explaining that "The tea ceremony encompasses all the individual arts of the West. In addition to painting and dance, there is sculpture (in the shape of the porcelain bowl), music (in the sound of the water on boil) and architecture (in the form of the tea ceremony arbor). These disparate elements intertwine, coalescing to form a single, perfect whole."

Sen no Rikyū, who was one of the most influential tea masters in Japan, is often credited with elevating this ceremony to the spiritual experience it is considered today. He established the concepts of wabi (simplicity in daily life) and sabi (the appreciation of antiquity) as its ideals, aesthetic values that are reflected in the clean lines and tranquilizing atmosphere of Sugimoto's atmosphere. "Inevitably," he writes, "Sen Rikyū had a powerful influence on my design for the Glass Tea House."

The name Mondrian, which is a transliteration of three different Japanese characters, has nothing to do with the famous painter but translates to "a modest house where one can hear the birds sing." Visitors to the Island of San Giorgio Maggiore are invited to view the exhibit and stop to "hear the birds sing" until October of 2015.