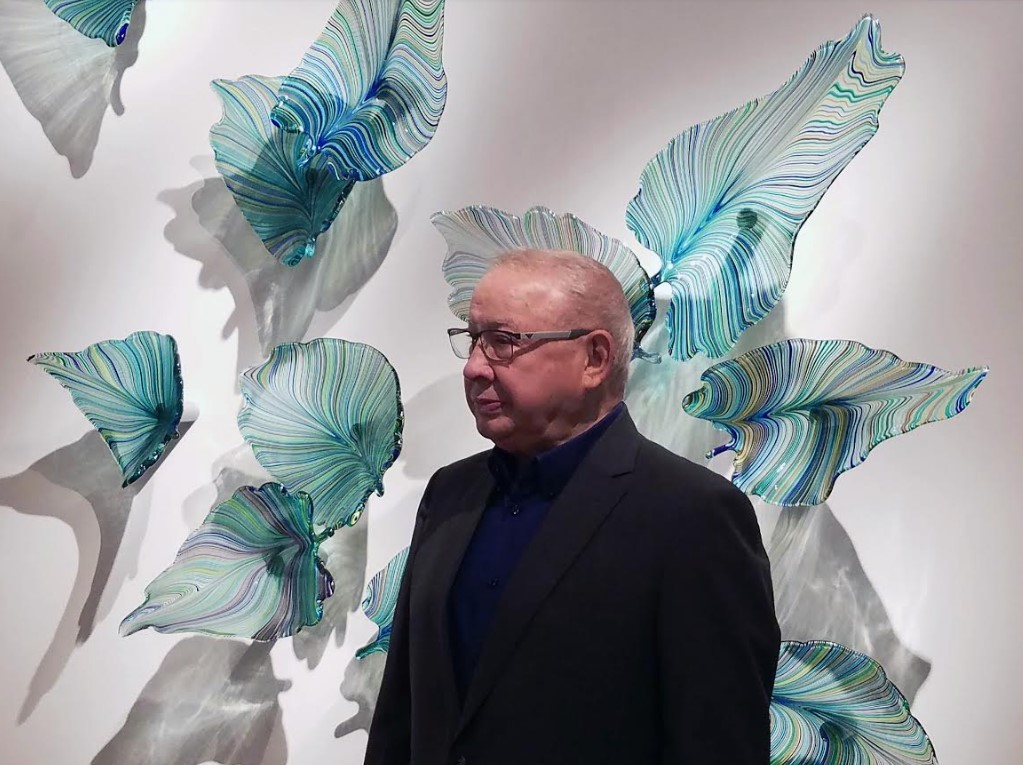 Glass maestro Lino Tagliapietra will be visiting Schantz Galleries in Stockbridge, Massachusetts, on Friday, July 12, 2019, from 3 PM to 5 PM. It will be the public opening of his solo exhibition titled "Visionary," which features 40 of his latest works. The exhibition honors Tagliapietra for his unusual and intricate explorations that continue to expand the boundaries of the glass medium. The new work reveals Lino's innovative use of color and pattern. Owner Jim Schantz told the Glass Quarterly Hot Sheet that the title of the show is an acknowledgement of the ways the artist continues to experiment and explore new ways to create within the glass medium.

“He continues to take it further with each show we’ve had, he’s been able to push the medium further and experiment,” Schantz said in a telephone interview. “His aim is to reach as high as he can, never limit himself. He’s always dreaming, imagining the next level of his work.”

The playful patterns in Nebula and Florencia are fluid and mesmerizing, punctuated by pops of vivid color. The colors are carefully chosen as not to overpower the intricate patterned detail, and the resulting patterns are a vibrant explosion of energy.

Jim Schantz said that a light-hearted element in Tagliapietra's work has come later in his career. “He’s allowing himself to be playful and experimental; his work is the most expressive and pure later on in his life.”

In bold works such as Dinosaur and Fenice, the sculptural element is echoed in the pattern and the pull of color throughout the piece, which appears spontaneous and purposeful all at once. The delicate presence of pattern and the playful sculpture work together to craft a unique narrative. Tagliapietra is careful not to let any one element of his works to overpower, and each piece is a careful balance between elements.

The flurry of activity within pattern in Hanoi and Lipari allows for an explosion of shape and form to happen within the structure. The lack of sculptural elements allows viewers to instead be pulled into the smaller details. Viewing any of the pieces within Tagliapietra’s wide-ranging Visionary gallery is a unique experience. Tagliapietra showcases the spectrum of his exploration, but the shared value is a playful appreciation for beauty.

“In the gallery you feel the lightness, the youthful energy of his work,” Jim schantz said. “This work gives Lino energy, keeps him young.”

The "Visionary" exhibit will see the debut of two of Tagliapietra’s installations: Aurora and Secret Garden (Laguna). Aurora, an LED illuminated glass panel, is a magnetic interpretation of the Northern Lights, that pulls viewers into a current of simple color and movement. Tagliapietra creates the panel by blowing a 3-D cylinder, which he then turns into a 2-D panel. This creates shifting depth, and a breathtaking effect, which adds to this homage to the Northern Lights' ethereal beauty.

“There’s this feeling of floating and weightlessness, while you also get the reflection of light within the work,” Schantz said.

Secret Garden (Laguna) is a group of individually-blown glass leaves in tranquil aquatic colors. This is the third addition to the Secret garden installation, and is crafted complexly though appears effortless upon viewing. Each of the leaves are blown separately, and is a unique piece in itself, Jim Schantz said.

While Tagliapietra has been involved in the glass art medium for decades, he has not stopped experimenting with pattern and new ways to create sculptures that evoke his endless curiosity.

“He’s always dreaming and imagining the next level of his work,” Schantz said. “In order to grow as an artist, work has to grow and change; Lino is keenly aware of that.”

Schantz also underlined Lino’s humanity. “In terms of sharing, loving what he does translates into the experience of his work and the great relationships he has,” Schantz said.