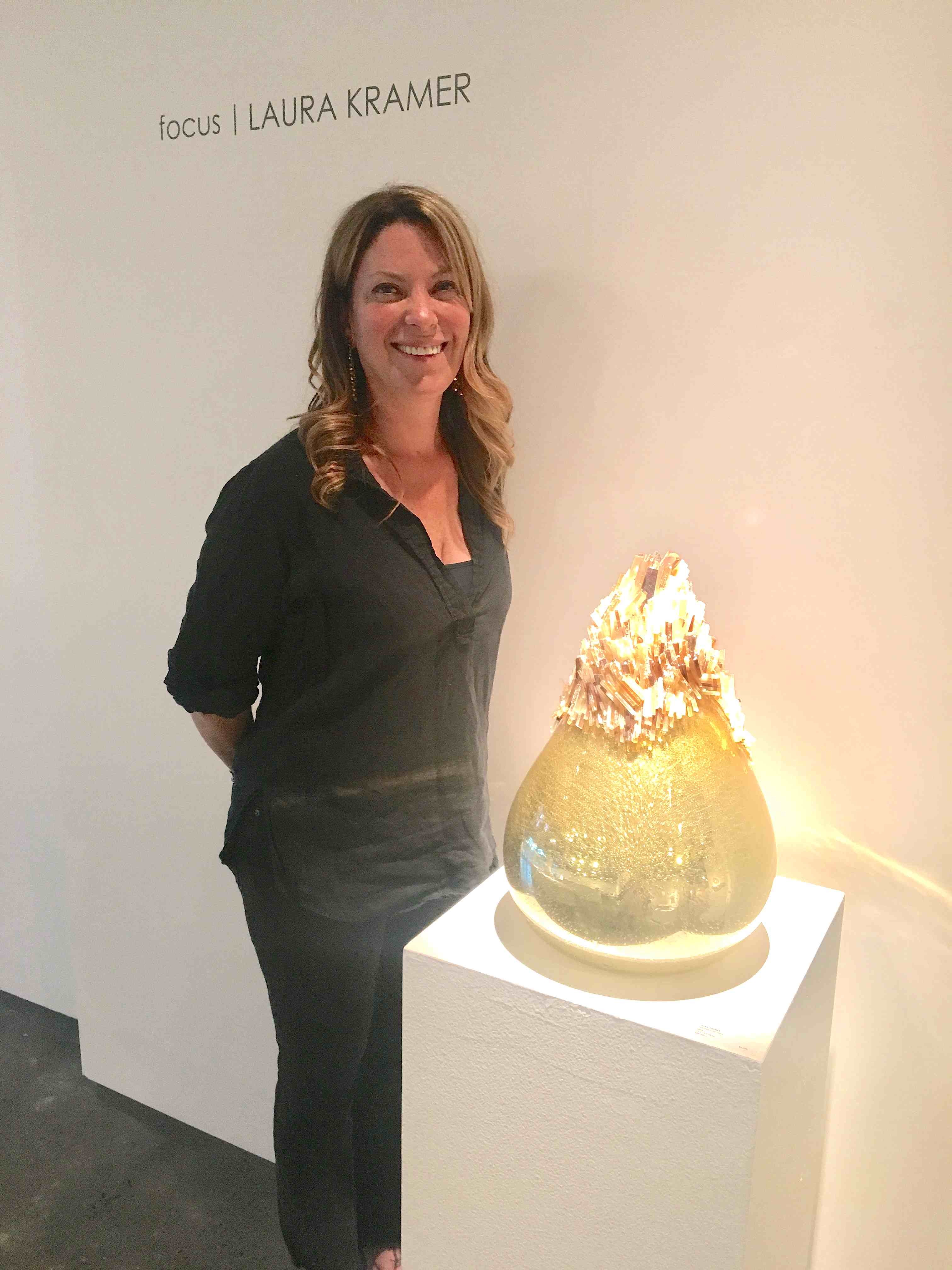 Laura Kramer with Pyrophyllite (2015) at the opening reception of her Heller Gallery exhibition. photo: gabi gimson

On a deep-sea archaeological excavation in the Caribbean, designer and glass artist Laura Kramer discovered that she was perhaps too invested in the aesthetic form of each artifact. In the process of cleaning a find, Kramer labored assiduously over the excavated object almost as if each was an individual work of art rather than an objective relic of past civilizations. Her temptation to influence the aesthetic presentation of these pieces helped her decide not to continue her career as an archeologist.

“I realized that I missed the hands-on process of creating,” Kramer explains in an interview with GLASS prior to her recent opening at Heller Gallery in New York, “and I was inspired by these objects, but I wanted to make them into art.”

Before scouring seabeds in the Dutch Antilles, Kramer was a textile designer. A chance discovery of the New York Experimental Glass Workshop (now UrbanGlass) studio on Mulberry street in Lower East Side, New York got her interested in glassmaking. (Read a feature article on the Mulberry Street location of UrbanGlass in the Summer 2017 edition of GLASS #147). Kramer was immediately enamored by glassmaking processes and the material, itself, and after her first glassblowing course at NYEGW, Kramer parlayed her textile design experience to create in another medium.

“Glass can express itself in so many different ways,” she says. “It contains dualities—hard/soft, durable/delicate. Glass is so many things.”

After earning degrees in glass from the Rhode Island School of Design (BFA) and Ohio State University (MFA), and working as a designer and artist in the subsequent years, Kramer decided to pursue another interest. She completed an MA in Anthropology & Material Culture from Columbia University, where she also studied archaeology—a subject seemingly incongruous to her artistic background, but for Kramer it was an organic progression.

“I’ve always been fascinated by Victorian curiosity cabinets and the assemblage of objects that hold both historical and aesthetic value,” Kramer says. “But I’m also interested in how natural processes change artifacts.” 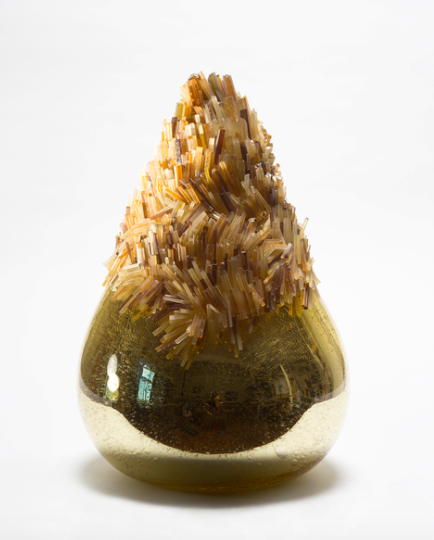 While Kramer chose not to pursue a career in archaeology, her background in the subject profoundly influences her work. In fact, a recently unveiled exhibition at Heller Gallery features work by Kramer, inspired by her time on the revelatory deep sea dig in the Caribbean sea. Indeed, some of the smooth glass works are festooned with repeating forms, almost as if they are encrusted with mussels or barnacles.

And it’s not such a stretch to imagine any of the exhibition’s featured pieces swaying and glittering above the ocean floor or jutting from the bow of a sunken ship.

One of the exhibition highlights, “Georgia”, named after Georgia O’Keefe, is a pink opalescent form that references female genitalia with stalactite formations lining its center crevice. Even with its overt feminine imagery, in the sea of Kramer’s other objects, “Georgia” resembles a seductive anemone.

“My design experience gives me a unique understanding of color theory and colorways, but I had a tough time deciding on the colors for 'Georgia',” Kramer says. “Even now, I’m not sure how I feel about the darker pinks in contrast with the lighter ones.”

Kramer’s design production studio, LBK designs allows her to work consistently but with more creative restrictions than her art career affords. For years, she worked mostly as a designer, creating custom glass pieces for clients on a commission basis.

“I started making work I wanted to make, instead of just making work for clients,” Kramer says.”I still do design, but I’m enjoying the freedom of not having to always adhere to trends or clients’ needs.”

Looking forward, Kramer says she will keep exploring the temporal nature of objects and their decay, but she’d like to her work to take another direction--vertical.

“I want to get off the pedestals and start making wall panels,” she explains. “I want to keep pushing the textures and patterns. I’m still interested in the becoming and unbecoming of objects, but I think they'll begin to take another form”