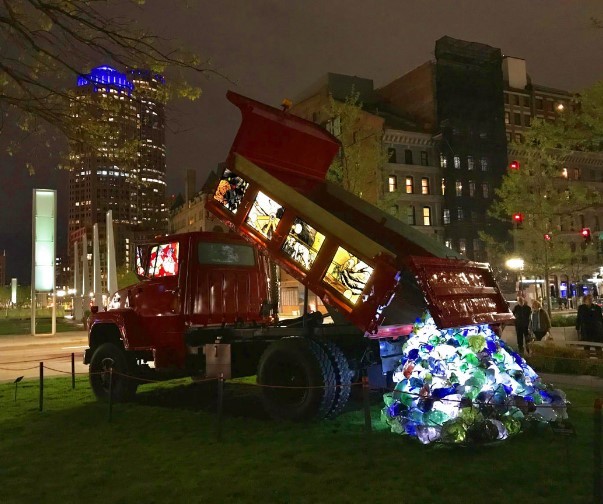 Artist Karl Unnasch, a Minnesota-based stained-glass window maker, has been gaining notice in the past few years for his large-scale installations that employ two-dimensional stained glass panels to bring new life to cast-off three-dimensional objects. The other-worldly results — pieces of industrial machinery outfitted with vibrant, pictorial windows that glow from within — reflect on the artist’s rural Midwestern upbringing. His piece Slumgullion (The Venerate Outpost), a log cabin outfitted with various types of art glass, was recently recognized by Americans for the Arts as one of 50 outstanding public art pieces created in 2018. In an ongoing Boston installation, Unnasch’s sculpture that brings together stained glass and an old dump truck explores the intersection of the natural landscape and the road construction process.

Through Fall 2019, “The Auto Show” public-art exhibition is on view at Boston’s Rose Fitzgerald Kennedy Greenway, a mile-long park created in the 1990s and early aughts via the destruction and subterranean rerouting of an elevated highway. The installations, which vary in medium and are by different artists, explore the Greenway’s history through themes of construction, transportation, automobile culture and more.

A Minnesota native, Unnasch lived in Massachusetts for four years (he earned his MFA from University of Massachusetts, Dartmouth) and personally experienced the construction of the Greenway, known colloquially as the “Big Dig,” firsthand. Inspired by the dedication of the blue-collar workforce that executed the project, he kept the dig in mind as he worked on projects years later. When he was invited by Greenway public-art curator Lucas Cowan to participate in “The Auto Show” this year, he seized the opportunity, settling on an idea that represented the actual construction of the Greenway, and Boston’s decision to alter its landscape.

The installation, titled “Operant (An Oldowonk Cataract),” features a red dump truck with backlit stained glass windows and a pile of backlit glass chunks—meant to resemble early human Oldowan tools—pouring from the back. The truck’s windows depict beavers, ants, elephants, and other animals known for their natural abilities as builders. Unnasch says the images are meant to remind viewers that human approaches to problem-solving are not always uniquely human.

“We fail to stop and recognize where our knowledge comes from,” he said in a telephone interview with the Glass Quarterly Hot Sheet. "All design comes from nature — if we stop and think about it, we distill it down to where we first paid attention to ants making a bridge from leaf to leaf.”

In representing the animal builder, the Oldowan tool, and the dump truck, Unnasch traces the natural history of human as "operant." As in his previous stained glass works that venerate the farm workers and mythologized “country boys” of the artist’s childhood, these windows celebrate the physical laborer as a vessel for knowledge that predates human civilization.

Other pieces in "The Auto Show," such as Erwin Wurm’s whimsical UFO-shaped Porsche, reflect on the Big Dig by commenting on our cultural affinity for cars and highways. Unnasch instead sets out to recognize “the intimately functional nature of the vehicle,” honoring the history of the specific dump truck he chose, which is at least 20 years old.

“I didn’t want something fresh off a manufacturer’s line, I wanted something that’s already had its own history evidenced by slowing down, paying attention and looking at the tears, the scuffs, the rips, the repairs. It’s just like when you look at someone who’s been in hard labor for years and you look at their hands...our bodies are so plastic and short lived that the damage we do to them has effects and comes through in how we carry ourselves. When we look at an old vehicle, it’s a full parallel to looking at ourselves.”

In the past, Unnasch has similarly accoutered tractors, windmills, chainsaws, lawnmowers, and more. While many of these pieces find a natural context in rural areas, Unnasch believes stained glass is especially powerful within Boston’s urban setting.

“When I started working in glass, what I found was this outstanding burst of color that’s oftentimes overwhelming, so that first and foremost contributes to the impact of the medium,” he said. “Here, there’s a splash of color in an otherwise stoic, brown and gray urban setting.”

The populist philosophy of Unnasch’s work is reflected not only in the artist’s aesthetics, but in his attitudes toward stained glass. He praises the medium as ideal for outdoor art not only because of its longevity, but because the liturgical stained-glass tradition (which Unnasch feels was a predecessor for the modern day comic book) is rooted in the aim of creating accessible narratives.

“Every church window is a piece of public art, so it’s not a huge leap to do a modern take on stained glass,” he said. “With these visuals and these structures and these locales I’m trying to bring it to the masses, the way it was supposed to be in the first place.”