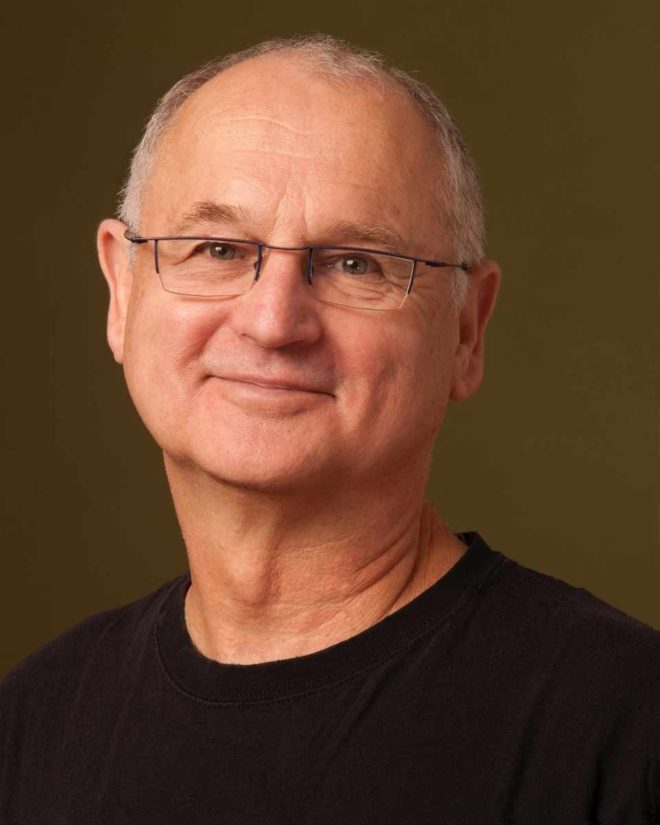 You can’t talk about the late Ron Desmett, who died on December 7th from complications of cancer, without talking about his wife, Kathleen Mulcahy, or vice versa. The two were a team for almost 40 years; both exceptionally talented artists. They were co-founders of the Pittsburgh Glass Center, accomplishing what no one believed possible, a glass arts center that is still thriving. Appropriately they were honored together as PA Artists of the Year in 2013-14.

Yet as much as they worked and lived together, sharing a creative vision, they were individuals pursuing their own paths. Ron, with a BS in art education from the University of Akron and an MFA in sculpture from Carnegie Mellon, where he met Kathleen, was a multi-disciplinary artist: a painter, a ceramist, a glass maker. He was an artist who mastered new mediums to communicate his ideas. One thing that connected all his work is the layering of ideas and forms. In his paintings, he recycled art history, finding new meaning in historical works.

In his recent glass, he reinvented the process of making glass, producing black lidded vessels that contrasted with the transparent and pristine qualities of most glass work. This work was inspired by and made in nature. His newest pieces travel to surrealism as he arranged old and new smaller pieces into quixotic and thought-provoking assemblages that reflect sculptural concerns. They seem particularly pertinent to our fractured present.

His career was full of successes — shows, commissions, publications, honors, residencies — and his work is in major collections, including the Carnegie Museum of Art, the Renwick Gallery of the Smithsonian American Art Museum, the Cleveland Museum of Art, and the Corning Museum of Glass, as well as several private collections.

Most of all, Ron was a true mensch, a man who loved to cook, who built his house and studio, who surrounded himself with other creative talents, making a fantastic circle of friends, some of whom were with him when he died after a two-year battle with cancer. He was the best kind of human being, a kind, compassionate guy who loved and supported his wife and his friends and who made a difference in our creative world.

A memorial service for Ron will be held at an as-yet unannounced date. Donations in his memory may be made to the Pittsburgh Glass Center, 5472 Penn Avenue, Pittsburgh 15206.