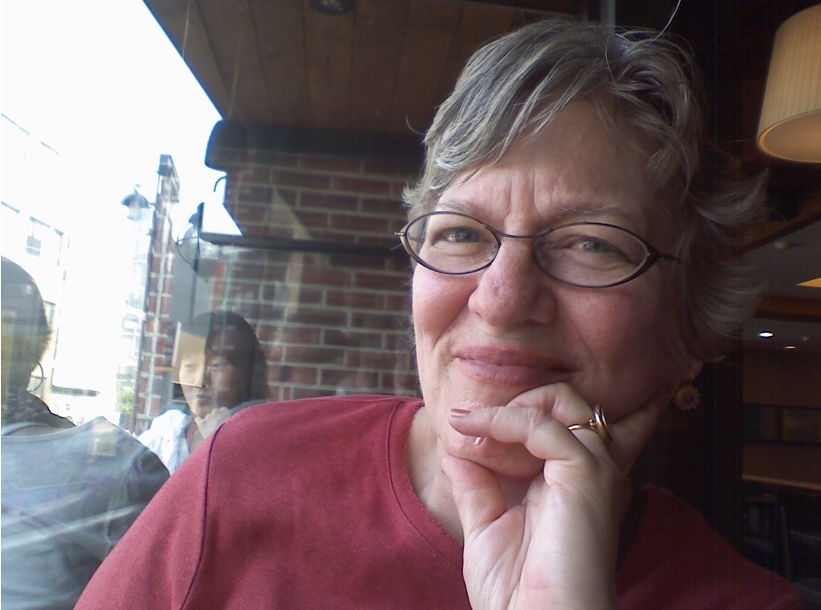 Victoria Josslin, a critic and contributing editor to the print edition of Glass: The UrbanGlass Quarterly, died suddenly at her home in the desert Southwest on May 12, 2019. She would have turned 73 in December. Josslin divided her time between homes on Bainbridge Island outside of Seattle, and Albuquerque, New Mexico, where she began to live part of the year after she married her former high-school boyfriend David Margolin in 2011. She is survived by her husband, her two children from her first marriage, two of her younger siblings, her mother, and her granddaughter. Josslin was the author most recently of the Spring 2019 cover article "Intense Quiet" on the new series of glass-on-glass paintings by Dale Chihuly (Glass #154), and her insightful, clearly articulated articles and reviews had been a regular feature in Glass magazine since she began writing for us in 2007.

Born in 1946 in Dunnigan, California, Josslin grew up in Washington State and later Arizona, where she played in a folk band in high school with her future second husband. Majoring in painting, she graduated from Occidental College in Pasadena, California in 1969, where she met her first husband, Richard Josslin. They had two children and moved to Bainbridge Island, Washington, in 1986. There, she would go on to earn her MA in art history from the University of Washington in 1995, and became a regular art reviewer for The Seattle Post-Intelligencer. She also founded the successful arts blog Artdish.com, which she ran for five years. Josslin also spent a decade at Bainbridge Arts and Crafts, an arts center where she served as director of education and information until 2013. Just last year she published her first novel, The Bookstore of Other Languages.

In crisp prose, Josslin explored glass art as an experience, sharing her visceral impressions with just the right amount of detail. Her reviewer's voice was plain-spoken, the intricacy was in the concepts and connections she unfurled in a clean writing style that allowed her ideas to sparkle. Consider her two takes on two very different bodies of work by perhaps the most famous glass artist in the world, Dale Chihuly.

In a 2009 review of a Traver exhibition, Josslin writes: "In Chihuly's new 'Venetians,' surface competes endlessly with form. Hundreds of bubbles animate the clear glass that lies over the reflective interior layer, creating a surface that seems to swirl in constant motion. All that activity takes place beneath big, sculptural glass vines that coil over the vessel, sprouting Fantasia-like flowers."

Contrast that with her more meditative take on Chihuly's recent paintings of vitreous enamels on glass, which was the cover article in the Spring 2019 issue of Glass:

Glass artists keep reminding us that glass is a near liquid, and I have never been more aware of that then when looking at this work. Looking straight into the work is like looking through seawater. You're wearing goggles, and you see some organic shape quite clearly in front of you. Less clearly, through the seawater, you see plants and organisms that seem to sway, and sometimes to glow. In the distance, you see an even hazier layer, faintly moving in the distance. The trick is that the creature that is moving is you. You can't move without seeing a slightly different work.

Water comes up again in Josslin's 2011 review (Spring 2011 edition of Glass [#122]) of April Surgent's museum show "Into the Surface," which featured photo portraits of Seattle city scenes rendered as engraved glass panels. "Seattle's water hangs in the air, runs over the sidewalks, and beats against the city's edge. In her installation at Bellevue Arts Museum, April Surgent creates a strong sense of place, producing the look of Seattle's heavy clouds and slick streets, dripping windows and drenched pedestrians, all by cutting through three thin layers of fused glass."

One article that was especially challenging was her profile of Baptiste Debombourg which ran on the cover of the Fall 2015 edition (#140). It was one of my favorite Josslin openings, combining a disarming directness with her signature empathy for the artist, and a sweeping flourish to gather up the many strands. And this was just the first paragraph, which seems as fitting as any to wind down this piece and celebrate an extraordinary thinker about art.

Who wouldn't want to smash some cheap material that nobody really wants? Probably most of us time-pressed, sleep-deprived, and information-saturated citizens of the new digital society. Now, who wants to painstakingly put all the pieces back together? That would be French conceptual artist Baptiste Debombourg, an artist concerned with violence and its scars; with destruction but also with repair; with wreckage as information about disaster, but also as the evocation of a human response.

The funeral service for Victoria Josslin will be held on June 29, 2019, at 1 PM at Bainbridge Island's St. Barnabas Episcopal Church, with the Reverend Karen Haig officiating. Donations in Josslin's memory can be made to the Episcopal Relief & Development's Global Needs Fund.