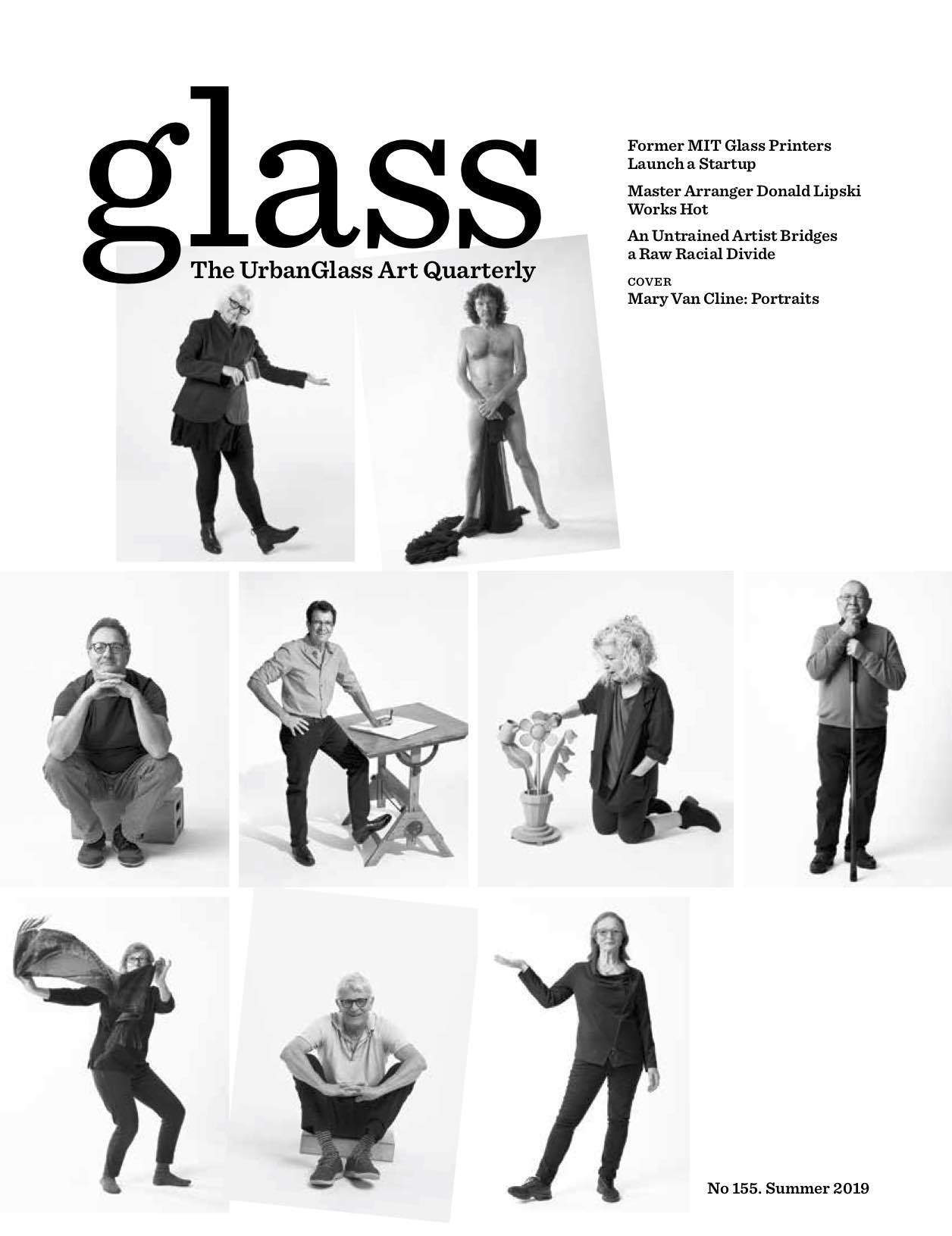 The Summer 2019 edition of Glass: The UrbanGlass Art Quarterly (#155) is hitting newsstands and subscriber mailboxes this week. On the cover is a collage of images from Mary Van Cline's "Documenta Project," an ongoing photographic quest to capture the images (and personalities) of the unique community of artists, dealers, and collectors who coalesced around glass as an art medium. In her cover article, critic and curator Patricia Grieve Watkinson writes: "Perhaps it says something about those involved in the Studio Glass movement that they are willing and used to collaborating with a fellow artist in a way that might expose their vulnerability, and that there are so many -- artists and collectors -- who are willing to ham it up in front of the camera for a slice of posterity."

Glass managing editor Eve Aaron conducts a wide-ranging interview with prominent contemporary artist Donald Lipski. A family friend and an example of a multi-media artist who employs glass for its ability to frame and organize tightly arranged assemblages, Lipski has recently been taking part in hands-on residencies, working with the material hot. This has opened up new expressive possibilities that are explored in their colorful conversation at the artist's Red Hook, Brooklyn studios.

In 2015, when MIT's Media Lab released a video of its breakthrough glass printer, the clip went viral. Hundreds of thousands of viewers watched mesmerized as molten glass "ink" issued from a heated, computer-controlled nozzle, creating vessels by building up layers of the honey-like thread. This was a new way of creating forms with glass. Fast forward to 2019, and Glass caught up with two of the printer's inventors, Michael Stern and Daniel Lizardo, as they were launching a start-up to take the new technology into lighting design and other applications. Regular contributor Alexander Castro visited the duo in their Cambridge, Massachusetts, offices and tells their story with vivid illustrations of the light-bending properties of the 3-D printed lighting globes.

As we do each year, the summer edition of Glass is bundled with The Corning Museum of Glass publication New Glass Review as a free subscriber bonus. Completely redesigned and expanded for 2019, in honor of the current museum exhibition "New Glass Now," this 200-plus page book is a fascinating survey of the state of contemporary international glass, juried under the leadership of Corning curator of modern and contemporary glass Susie J. Silbert. This lavishly produced and elegantly designed publication is included in subscriber and newsstand copies

Don't miss a single issue of the exclusive features and reviews only published in the print edition Glass. Subscribe today!