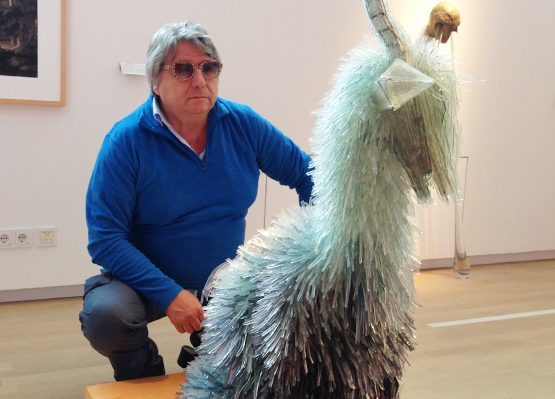 Adriano Berengo at a German museum exhibition of Marta Klonowska who participated in two prior Glasstress exhibitions.

Glasstress 2017, on view through November 26 in the Palazzo Franchetti in Venice, is a collateral event, which means it's a satellite to the international Venice Biennale. A carefully curated survey of contemporary art in glass, Glasstress includes work by artists who have devoted themselves to glass for their entire careers, but the majority of what's on view in the exhibition is by internationally known artists who came to the island of Murano to have their creative ideas fabricated in glass. This, the fifth iteration of Glasstress, was curated by Hermitage Museum contemporary art department director Dimitri Ozerkov,  Austrian artist Herwig Kempinger, and Glasstress founder and the head of Berengo Studio, Adriano Berengo. This Glasstress may be a high-water mark for bringing the biggest names in contemporary art to glass as the exhibition includes work by Sarah Sze, Paul McCarthy, and Ai Weiwei. With artists hailing from Austria to Iraq, the event also includes a site-specific installation in Murano. The "The Unplayed Notes Factory" is an installation in an abandoned glass factory by Loris Gréaud, who is making his Glasstress debut.

In a telephone interview with the GLASS Quarterly Hot Sheet, Adriano Berengo, the founder of Glasstress as well as Fondazione Berengo, which provides residencies and internships to artists and students, said: “We are trying to, in putting together contemporary fine art artists and glass, bring a new dimension to the ancient tradition of Venetian glass, and we just put it directly into the future of glass, which has to be connected with contemporary art, because this is where the world is going to, you see.” 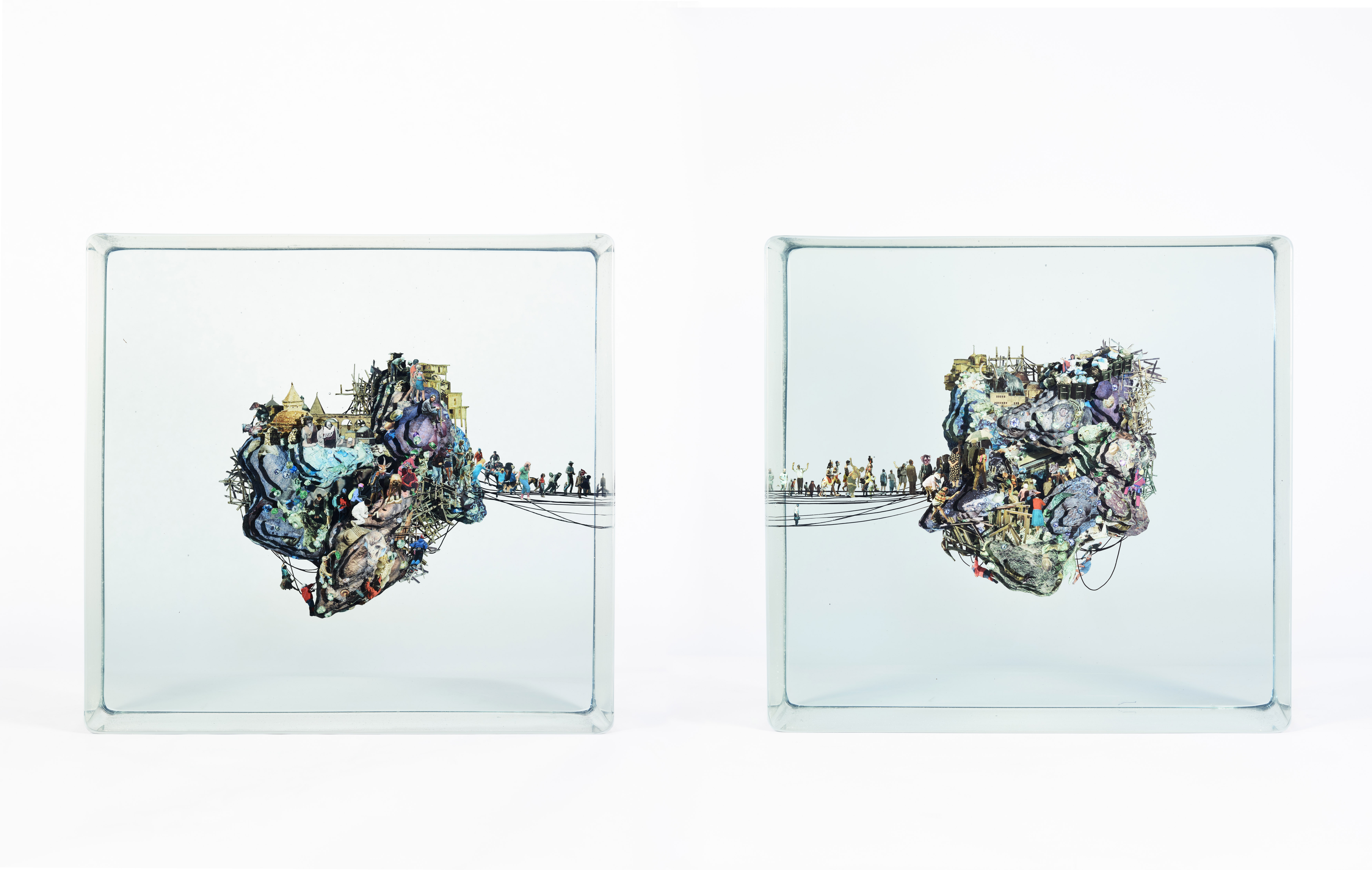 In this year’s selection of work, it's often easy to identify work that was made in Murano. For example, Thomas Schütte’s brightly colored jar-like sculptures contrast with Dustin Yellin’s busy, catastrophic dioramas, which he makes in his Brooklyn multimedia studios. Charles Avery’s boxes of eels and snakes, which brings the smooth, slippery texture of the glass to life in the most natural (and unsettling to those who find eels unpleasant) way, are far different than Karen LaMonte's cast-glass figures from her "Nocturne" series, intricate studies of fabric and folds, which conceal and reveal a feminine form within.

This begs the question: is this simplicity of form and texture simply a byproduct of unfamiliarity with the medium, which Glasstress is for many of the participating artists, and deviation from that a consequence of experience? By this collection of works alone, it certainly seems that way. Artists with deep knowledge of the material such as Yellin, LaMonte, and Josepha Gasch-Muche make works that sharply depart from the smooth textures and conventional forms of glass sculpture and put the medium into service of their concepts, and the limitations of what glass can and cannot do have already been resolved. Their work is also easy to discern because it  is not blown glass but cut, flameworked, or cast in facilities outside of the Berengo studio space.

Meanwhile, other artists whose primary medium is something other than glass, seize their first opportunity to embrace the material's unique features, bring their preexisting concepts and styles to be translated into glass. GLASS Quarterly contributing editor James Yood wrote in a feature article in the Winter 2015 edition of GLASS (#141) about the 2015 iteration of Glasstress, “Jake & Dinos Chapman wittily titled their piece The Same But In Glass, hinting that at least on one level they saw their visit to Murano as a bit of a lark, an opportunity to travel someplace interesting and work with and meet intriguing people, all to produce a body of work based on ideas they had investigated earlier in another medium,” which it seems that many artists at Glasstress are continuing to do two years later. 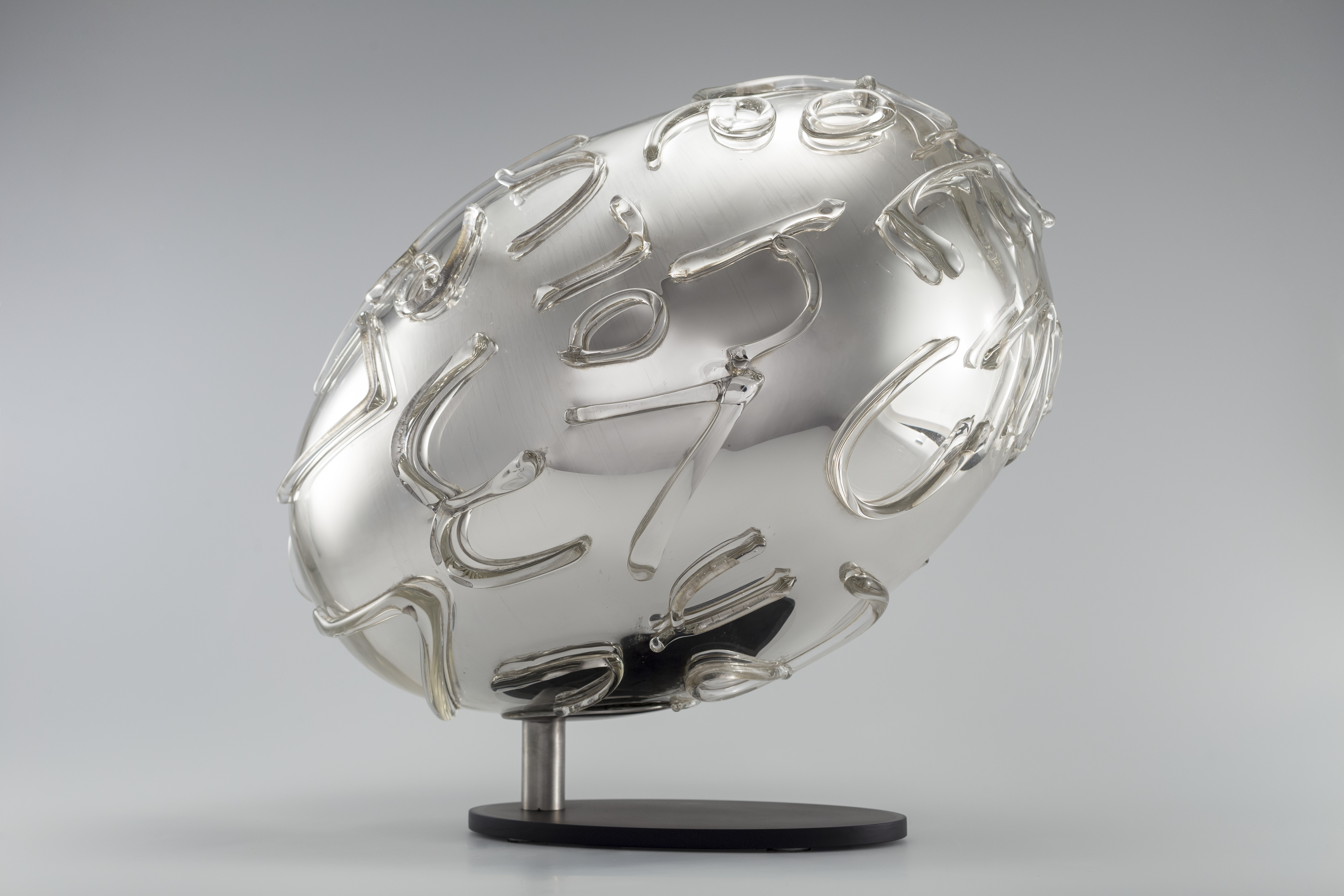 Berengo acknowledges the difficulty of artists struggling to express with glass. "When artists come to Murano, you know, first they come with certain ideas,” he said. “But pretty soon they realize those ideas are impossible to do.” Still, many artists see this as a challenge, an opportunity, and an experiment, and most of the time, it does turn out well and is executed both with creativity and conformity to the artist's unique ideas, like Charles Avery's eerily lifelike eels.

Whether a one-off experiment, one of many media in an artist's arsenal, or the artist's singular material from which they make all of their work, glass will, to some degree, be implanted in the minds of all who participate in and see Glasstress 2017. It may be a tradition in Venice, but to the rest of the world, Glasstress and others like it are actively forging a place for glass that exceeds tradition and takes its place firmly in the realm of international contemporary art. Berengo said, “My little contribution is to continue what I do, to have Glasstress in the future, in such a way that glass can be integrated into the art world, and to bring art to glass -- and glass to art.”