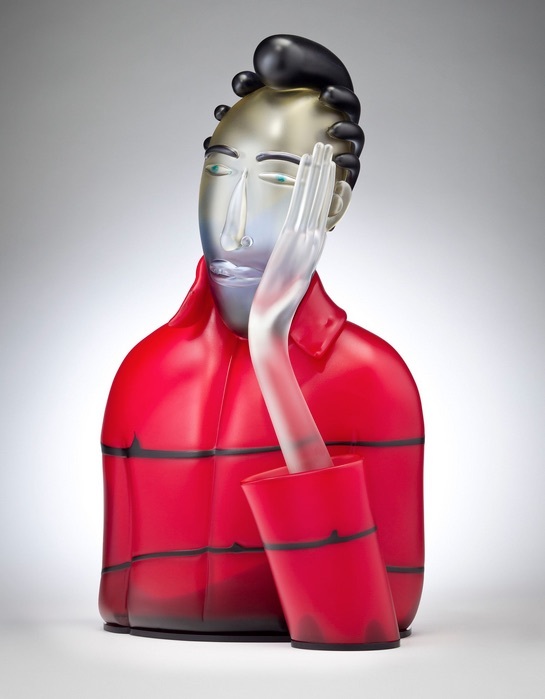 For an exhibition aptly titled "Character Sketch," the Chrysler Museum of Art has assembled 33 of Dan Dailey's figurative sculptures that span the prolific pioneering artist's four-decade career. Blown and hot-worked figures will share the exhibition with cane murals as well as wall reliefs made from Vitrolite, a structural glass used in the first half of the 20th-century, most notably for Art Deco facades. A dedicated draftsman, Dailey's attraction to liquid glass stems, in part, from its parallels to the flow of ink from a pen. Several of Dailey's original drawings will be on view to demonstrate the close connection between finished objects and the sketches that guided their creation.

“Use of the term ‘sketch’ in this show is by no means intended to suggest that Dan Dailey’s artworks are somehow incomplete ideas or rough, quick images that are unfinished and meant to be the basis for a final work,” explains Needell, who holds the title of the Carolyn and Richard Bary Curator of Glass “Dailey’s artworks are fully realized visions made with materials that actually underscore the work’s completeness. The word ‘sketch’ draws attention to how Dailey’s artwork embodies both the purpose and process of sketching, capturing the essence or overall meaning and nature of something in a seemingly simple and spontaneous manner.”

Though figurative, Dailey's works are by no means realist in style. His characters are, in a way, complex and nuanced caricatures of individuals they are based on. While their rendering may be distilled, this allows their specificity to give way to a greater universal portrait that celebrates a shared humanity.

Dailey brings a lengthy resume as an educator as well as an artist, having founded the MassArt glass department in 1973, and teaching frequently and internationally. His exhibition list is even more lengthy than his prolific teaching engagements and lectures. It is fitting, then, that Dailey will present a gallery lecture at the Chrysler on April 4, 2020, as well as participate in an evening with the artist on May 8, 2020, which will be accompanied by a weekend of demos at the museum's neighboring Perry Glass Studio.