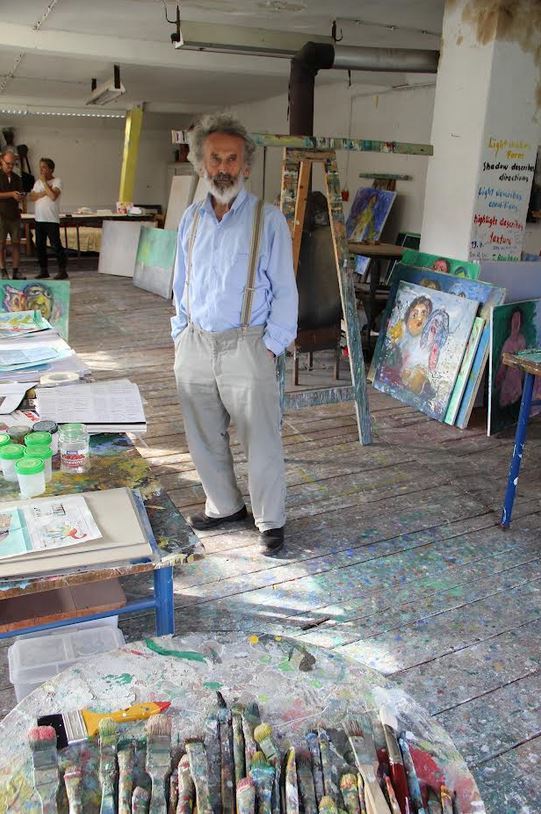 It was the early 1980s, and the relatively new group of artists working in glass were searching for a fresh direction away from simple techniques and towards a form of expression more attuned to the larger art world. I was one of those artists. On a class trip to New York City, I found myself mesmerized outside the newly opened Heller Gallery in SOHO and discovered an artist that answered all the questions for me. On display was an enormous exhibition of the German artist, Erwin Eisch. Alongside the many paintings and drawings were fabulously interesting glass works unlike any I have seen before. Among others on view were oversized mold-blown human thumbs, painted and lustered complete with thumb prints. I knew then that this work echoed a significant answer that so many had been looking for, sculpture and painting that placed primary importance on the idea of individuality and the role one’s expression can play in forming personal and significant art.

The tiny town of Frauenau, Germany, where Erwin was born, sits in a valley in the traditional glassmaking region of Bavaria. His family were mostly glass engravers. He would often take me to the Baroque church in the center of the village and marvel at the wonderful painted ceilings. I believe those painted walls led him to study at the Munich Art Academy where he confirmed his passion as an artist in any material. Afterwards he planted his feet firmly between tradition and the poetic vision he had for his instinctive work radically influencing countless others who in some way come into contact with him and his unique philosophy of art.

Today is Erwin’s funeral. We will all miss him so much. His songs and his presence and his art will live on multiplied by the countless artists influenced by his vision. The art academy, Bild-Werk founded by Erwin, Thomas Buechner, Katharina and Gretel Eisch, will remain a source of inspiration for years to come. I am honored to have worked alongside Erwin for that last thirty years. His attention to students and outstanding generosity towards all those searching direction has formed an important monument to his influence.

Erwin lifts a glass of fresh pressed apple juice sitting in his old wooden kitchen chair and stares. He often would stop and stare and suddenly burst into song or a story. I have had the most amazing moments sitting at their painted kitchen table as have so many artists who visited Gretel and Erwin. For me, heaven was that warm rustic little kitchen, but for Erwin, "Heaven" was what he called his painting studio at Bild-Werk. Written in broad colorful brushstrokes on the plaster walls was the phrase: “heaven begins on earth”. Now that Erwin has left this earth, we can be assured he is in a new studio, pocketful of colored pencils and a host of singing angels waiting in line for a fresh drawing from the great storyteller Erwin Eisch.