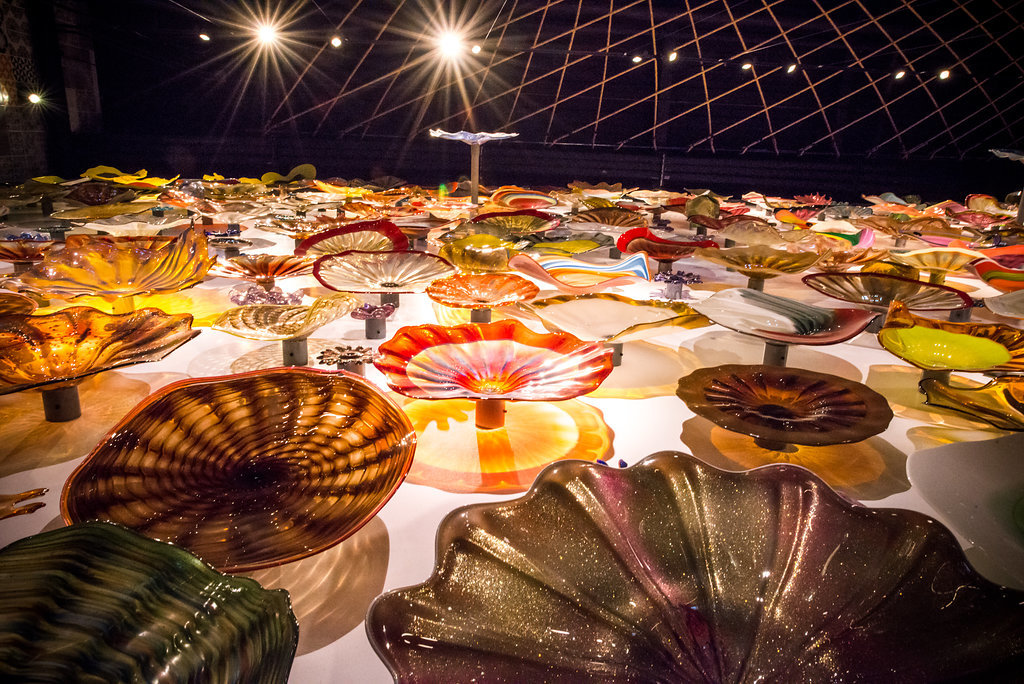 Stepping into Vidrio, a Mediterranean restaurant in Raleigh, North Carolina, visitors are met at once by kaleidoscopic discs and whorls of color that recall shells and aquatic flora, and combine to create an immersive atmosphere. Through this 30-by-50-foot wall mounted assemblage by Doug Frates Glass, which consists of 700 hand-blown glass pieces hung by the artist and his two assistants, the seascape is evoked in a rich display that is offset by the restaurant interior's otherwise minimalist decor.

Frates’ career took off after an unlikely start. Originally from St. Louis, he had enlisted in the United States Marine Corps and served in Iraq in 2003. When his tour of duty ended, he began searching for a civilian career. In his newly-adopted hometown of Tucson, Arizona, Frates took a glassblowing class at the Sonoran Glass Art Academy — a fortuitous decision that would take him on the path to becoming an internationally recognized glass artist. Frates studied with such masters as Fritz Dreisbach and Tom Philabaum before striking out on his own, moving to Ohio to be nearer to family as well as to establish his own practice. In 2005, he formed Doug Frates Glass, located in the heart of Springfield, Ohio, and now caters to a range of international clients.

In an interview with the Glass Quarterly Hot Sheet, Frates was asked whether he saw glass-making as having therapeutic value after his military work, and he responded: “Definitely — you get that sense of an exhilarating rush — and even after the piece is done the adrenaline keeps going, and drives you to keep creating.”

This drive supported Frates through the difficulty of starting his own company from the ground up, a tough but rewarding endeavor. The main challenge, Frates noted, was to differentiate the company’s products and set his work apart from the rest of the crowd. Personality was key to the company from the start, and Frates stresses the importance of understanding where the client is coming from and customizing the work accordingly: “It’s really about trying to understand the person themself, not just presenting them with the work.” Considering the company’s significant resumé of work with hotels, restaurants, residences, and gardens, including international work with Cantoni, American Valor, and Creative Avenues, it’s an approach that seems to have paid off.

With Vidrio, the idea for the project came about from Giorgios Bakatsias, an interior designer and restaurateur based in Raleigh, who had previously met and collaborated with Frates on several smaller works. Bakatsias recommended Frates for the project, and the two also became involved with design consultant Theodore Kondylis on the restaurant.

The main attraction to the project, Frates said, was the opportunity to work from a blank slate. Supplied with details on the format of the space and samples of possible wallpaper and furniture designs, he was then given completely free rein. For such a large work — in fact, Frates’ largest installation to date — there was little in the way of strict planning. The entire process was marked by a fluidity and sense of improvisation. Rather than approaching the space with a set design, Frates preferred to familiarize himself with the space and let the piece organically “lay itself out the way it wanted to.” At one point, the team had installed most of the pieces when he decided it needed to be redone — there simply wasn’t the “right feel” — and the entire piece was rearranged to his specifications. 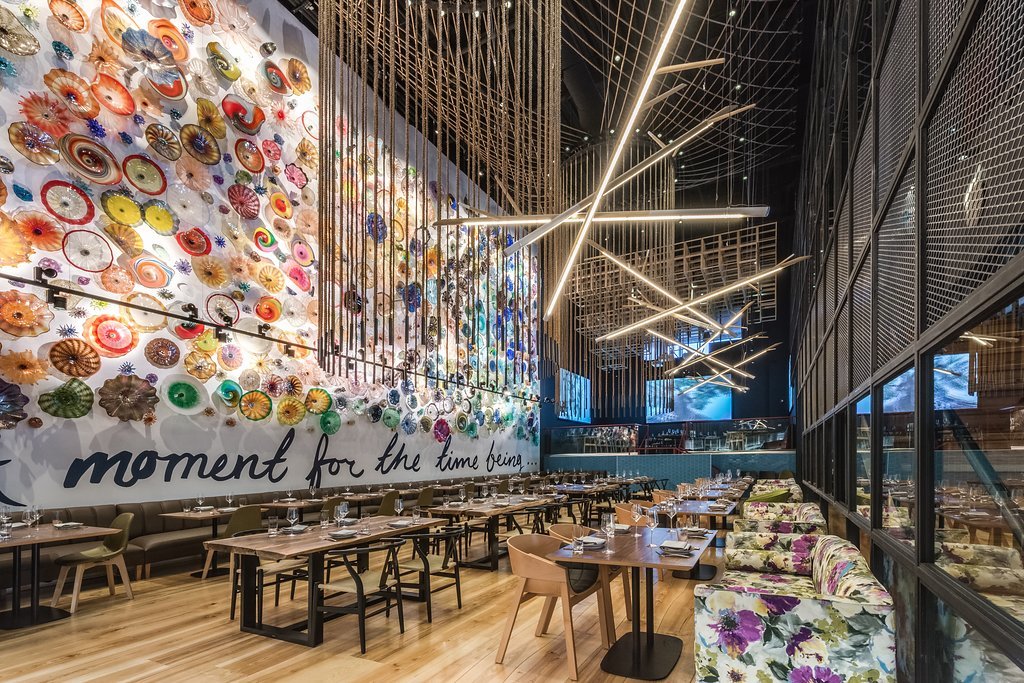 As for the qualities of the work itself, Frates stressed the importance of finding a distinctive style. He wryly commented that everybody in the glass world knows how to do wall hangings, and so he had the exciting challenge of making something unique, to separate his work from what people might stereotypically expect.

While it wasn’t confirmed from the onset that the restaurant would be Mediterranean, once it was decided Frates was clear about wanting to weave in the feeling of the region’s culture and atmosphere, and drew from his own time spent living in the Mediterranean. “The intention was to design Vidrio as a looking glass into the Mediterranean world,” Frates said. He was inspired by Park Guell in Barcelona, famous for its colorful tile-shard mosaics made by Josep M. Jujol, and wanted what he called that same “living, rhythmic feeling” and “certain disorderly order to it.” His vision was to “build an environment around the glass wall, instead of having the environment define the glass work”, and achieved this through the sheer scale as well as the wealth of different designs and patterns featured in the work, which utilizes genuine Italian silica. The whole piece was to come together "almost like a painting", Frates said, and the inclusion of the quote in script "a moment for the time being", a tagline suggested by the restaurant owners, was "a finishing touch that needed to happen."

But perhaps the foremost draw to the display is what is often the heart and soul of Frates’ work: color. “Really ultimately what I’m attracted to when it comes to glassblowing is color,” Frates said, and it certainly shows in the work for Vidrio, which radiates from the warmer shades of the rainbow to indigos and violets, forming the living rhythm Frates mentioned seeking. From a video on the company website, Frates has also commented: “I’m a color fanatic — I love creating new colors out of mixing and matching different glass colors. I love learning the science behind them, in order to get them to be the best quality they can be.” Curiosity and love of color drive his practice, across all projects from the display for Vidrio to collections like "Sedona", a series of vases, bowls, and urns that “grew out of Doug’s time spent among the Arizona city’s red sandstone formations and riverbed rocks found near what is one of his favorite places in the world.”

As both of these works suggest, Frates’ work is also often rooted in place and culture, and he has commented on his role in the revitalization of Springfield’s downtown arts community. Though small and still finding its footing, the community has invested heavily in nurturing an artistic culture according to Frates, and as a major player in that scene, he looks forward to its continued growth.

And as for what’s in the future for Frates? The company is always on the lookout for new projects — especially, as Frates told the Hot Sheet, when “the work is left to the artist’s hands, and we can really express our range and have more artistic play.” It’s clear that freedom and an openness to explore have always been significant to his practice, from serendipitously falling into glass work after the military to finding through a happy accident the perfect color.

“You never know what you’re going to come across in glass-making,” Frates said.