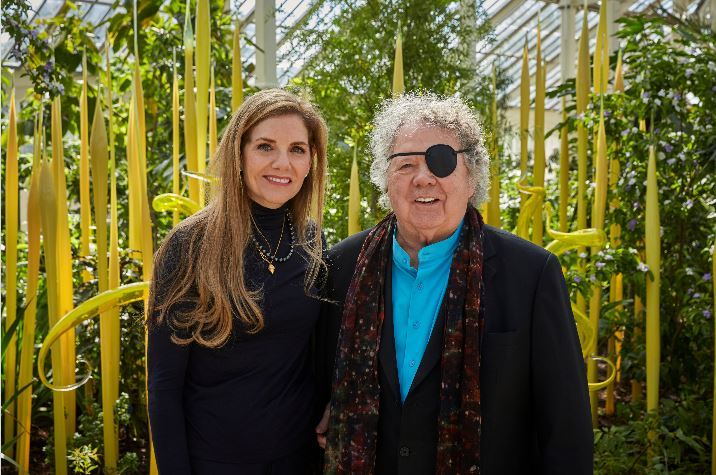 In 1971, Dale Chihuly, two teachers, and 16 students traveled to Pilchuck Tree Farm, a 54-acre parcel of forested land in Washington State, where they held an experimental summer workshop in glass funded by a $2,000 grant. Sixteen days in, the team had set up a crude but functional hot glass furnace and a glory hole, and cobbled together primitive housing. The event would not only lay the foundation of the Pilchuck Glass School's first half-century, it was also the site of an important early artistic exploration of glass installation in a natural setting in the form of Chihuly's Pilchuck Pond Installation, in which he floated clear blown glass forms in a pond like oversized organic bubbles, among the first of his career of interventions in botanical settings. It was a fitting, if surprisingly generous gesture, when on May 15th, 2022, Dale and Dale and Leslie Jackson Chihuly announced a $2 million gift to Pilchuck to support the continued role of Pilchuck as a place of experimentation and discovery in the material of glass.

The gift was announced at the end of a 50th anniversary celebration for the Pilchuck community held at Chihuly Garden and Glass in Seattle. Leslie Jackson Chihuly, the president and CEO of Chihuly Studio who has served on the Pilchuck Board of Directors for nearly fifteen years explained, “Our support of Pilchuck is based on the founding principles of the school: to foster an environment of experimentation and support where artists can learn, grow, and explore the medium of glass. This philosophy is what makes Pilchuck so unique and so important to the world. We are proud to be part of its past, and we look forward to a bold future.”

Pilchuck executive director Christopher Taylor thanked the Chihulys after the monumental donation was announced. “We are excited about the possibilities this incredible gift represents for our artist community, and we’re blown away by Dale and Leslie’s generosity.” Reflecting on the history of the school, he said, “Pilchuck has grown and changed so much over the past fifty years, and we’re all so much richer for what Leslie and Dale have fostered here on this campus in that time—a dynamic community of learning, creativity, and innovation that has inspired generations of artists and is poised to inspire many, many more.”