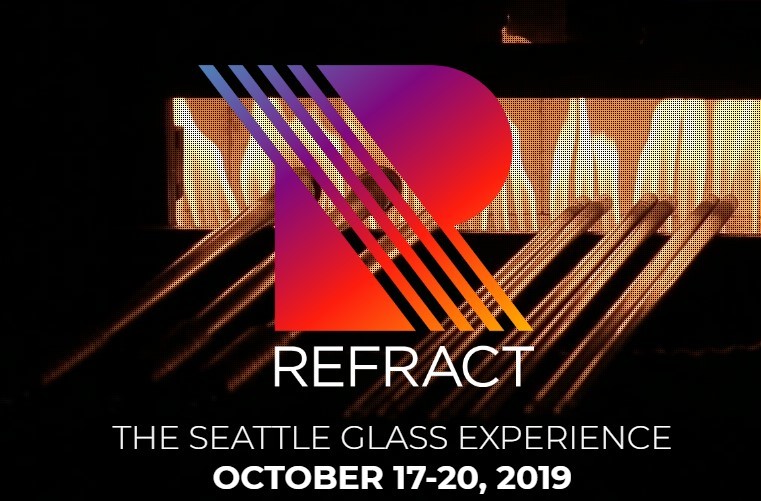 From October 17th through the 20th, glass-art institutions from Tacoma to Everett will collaborate on a first-ever region-wide event called "Refract Seattle." This four-day event is anchored by Chihuly Garden and Glass (CGG) and Visit Seattle, a private nonprofit marketing association, which co-host the festival, with over 30 partners organizing their own programming throughout the region, and it will overlap with the Pilchuck annual auction weekend. The event will kick off with a party at Chihuly Garden and Glass near the Space Needle, and conclude with a street party on Pike Place Market, with museum events, open studios, and a glass-art street market at Pratt.

The idea for the festival came from a 2015 study on the state of glass art in America conducted by Chihuly Garden and Glass and the Glass Art Society, which noted trends like increasing accessibility, inclusivity, and technological advancement while identifying the Pacific Northwest, home to over 700 glass artists and over 100 glass studios, as a hub for the medium. A survey of the general public also found that 74-percent of people were interested in learning more about glass art.

“Beyond Chihuly, there’s not a great understanding of all the artists here who are incredibly talented, or of Pilchuck Glass School being the international organization that it is, so I do think there’s a huge gap in people’s knowledge,” she said. “Glass always seems mysterious to people, I think, because it's harder to understand or get access to, which is how Refract sort of came about.”

“There are so many creative uses for glass and there are so many levels of artists in the city, so it gives emerging artists a really nice chance to introduce their work to people while also giving renowned artists an intimate way to connect with glass collectors,” she said. “The more people who learn about glass and get interested in glass, the better it'll be for our community in the long run, so I think it’ll be beneficial to galleries, museums and the artists themselves.”

Among other cities and towns, the festival’s geographic range will unify Tacoma and Seattle, two hotspots that might otherwise compete for the same crowd of glass aficionados.

“We want to demonstrate that there is glass throughout the Pacific Northwest and not just in Seattle,” said Whitver. “I think having Pilchuck up north is a good example of that, it draws a lot of artists in, and then they find their home somewhere within the region.”

Christopher Taylor, executive director at Pilchuck, believes the timing of the festival in October will likely draw more people to the school’s annual auction, which is now listed as part of the festival.

With new Netflix reality show Blown Away introducing audiences to glassblowing this summer, the festival coincides with an especially momentous time for glass entering the mainstream. Whitver said the idea of public accessibility is consistent with the legacy of Chihuly, whose large-scale work is popular even among glass novices who might recognize it from casinos or botanical gardens.

“We do get a lot of people coming to CGG [Chihuly Gardens and Glass] from all over the world who are experiencing glass art for the first time, and one of the questions we hear really frequently is, ‘Where else can I see this kind of glass art?’ At CGG we’re a gateway into the medium for a lot of people,” she said.

Whitver said that the process of organizing the festival was an inspiring feat of networking in itself, as the initial core group of partner organizations reached out to their own contacts and drew in new participants.

“It was a really nice way to see the whole community come together,” she said. “Knowing how much interest there was from the artists and organizations really showed us that this has been a long time coming, and there’s really been a hunger for it from both artists working in the community and people living in Seattle who want to learn more.”