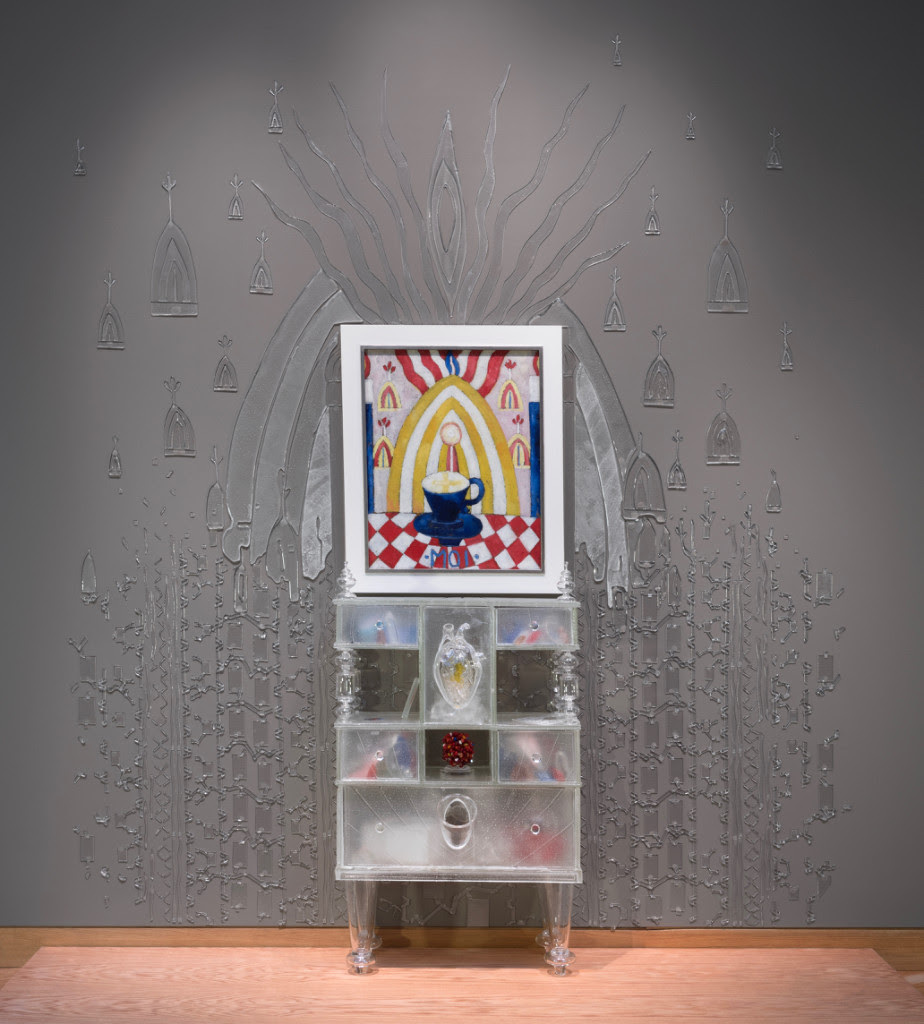 Beth Lipman spent almost ten years planning a commissioned work for the Weisman Art Museum (WAM) that reflects on the paintings of acclaimed American Modernist Marsden Hartley. The invitation came as part of the Minnesota museum's series entitled "Sympathies", in which artists were invited to, in the words of senior curator Diane Mullin, "ponder their own work with and through the work of other artists/makers" in the museum's permanent collection. Mullin has long been an admirer of Lipman's explorations of material culture inspired by the 17th-century Still Life tradition, and chose her because of "the manner in which she entwine[s] material, history and biography in her salient objects and arrangements." 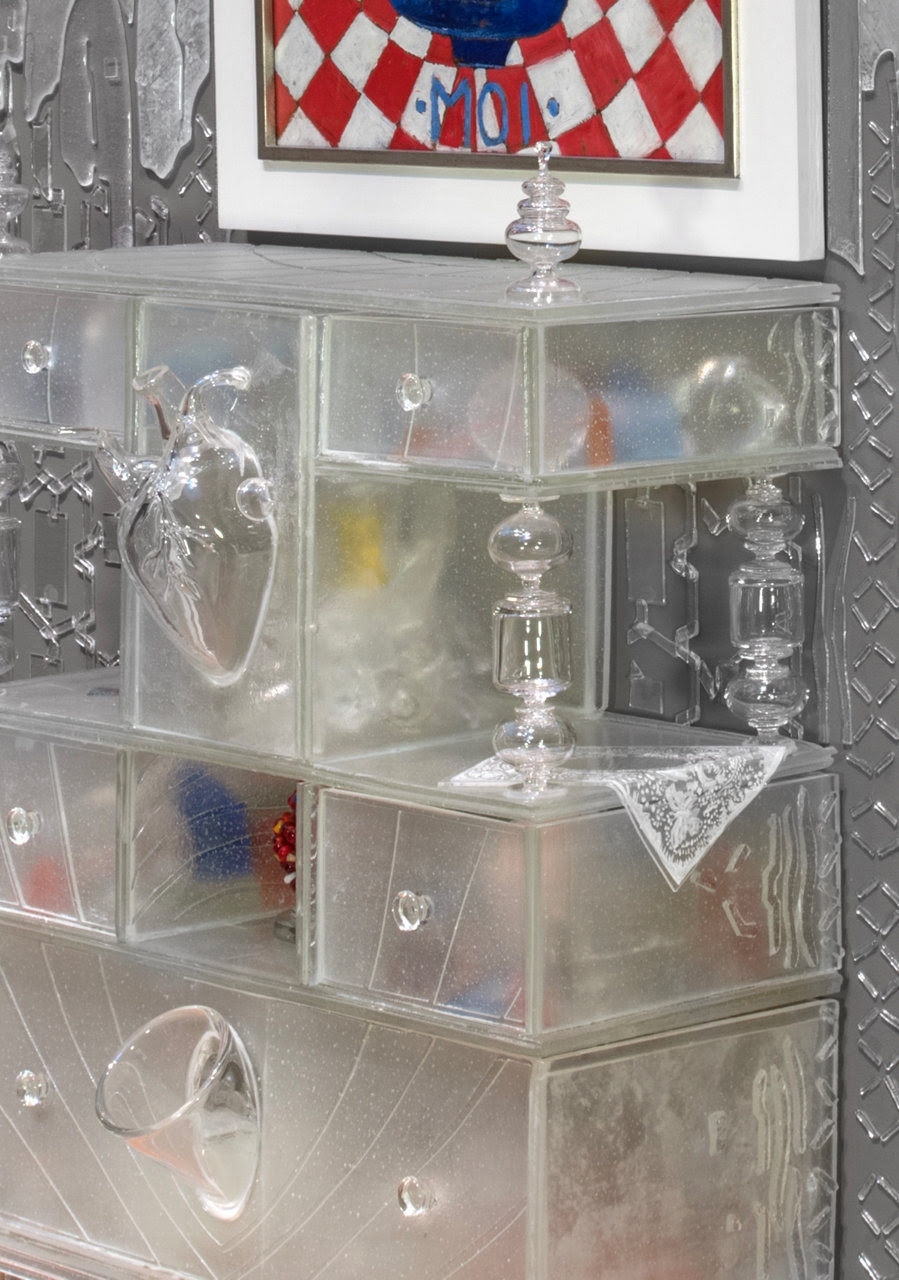 The resulting One Portrait of One Man is a glass wardrobe with Marsden Hartley's original painting One Portrait of One Woman (1916) in the place of the mirror. Inside, the wardrobe is filled with glass replicas of objects related to the lives of Hartley and Gertrude Stein, the avant-garde writer and patron of the arts who is the subject of One Portrait of One Woman. The wardrobe is further surrounded by glass wallpaper that flourishes outward as if in extension of Hartley’s original work. Lipman’s piece can be seen as a triple portrait of Stein, Hartley, and the artist/viewer. However, it is also a meditation on how we construct our identities, the coherence of the self, and the gaps that exist in our knowledge of ourselves and others.These are all themes that bridge the over one-hundred-year gap between Hartley's painting, made two years after the breakout of World War I, and Lipman's installation, which was unveiled in October 2017.

One Portrait of One Woman "immediately came to my attention," Lipman said when recalling her experience reviewing the Weisman Museum of Art's Marsden Hartley collection. She was not only fascinated by this particular work, but also by Hartley himself. In addition to being a painter, Hartley was also a prolific writer and poet influenced by transcendentalism and its proponents like Ralph Waldo Emerson and Walt Whitman. Lipman’s fascination with Hartley led her to the Beinecke Rare Book and Manuscript Library at Yale University where she was able to handle and witness objects that belonged to both Hartley and Gertrude Stein. The objects included in the glass wardrobe of One Portrait of One Man are replicas of the objects Lipman found most compelling and are, in her words, “expressive components” that reflect her perspective of Hartley and Stein. These components were made painstakingly and in detail. Rather than purchasing beads to create a bead ball, for example, Lipman made each “red, perfect, energy filled bead” herself. She poignantly expressed how

“the act of making is deliberately inserting yourself into [a] dialogue.” 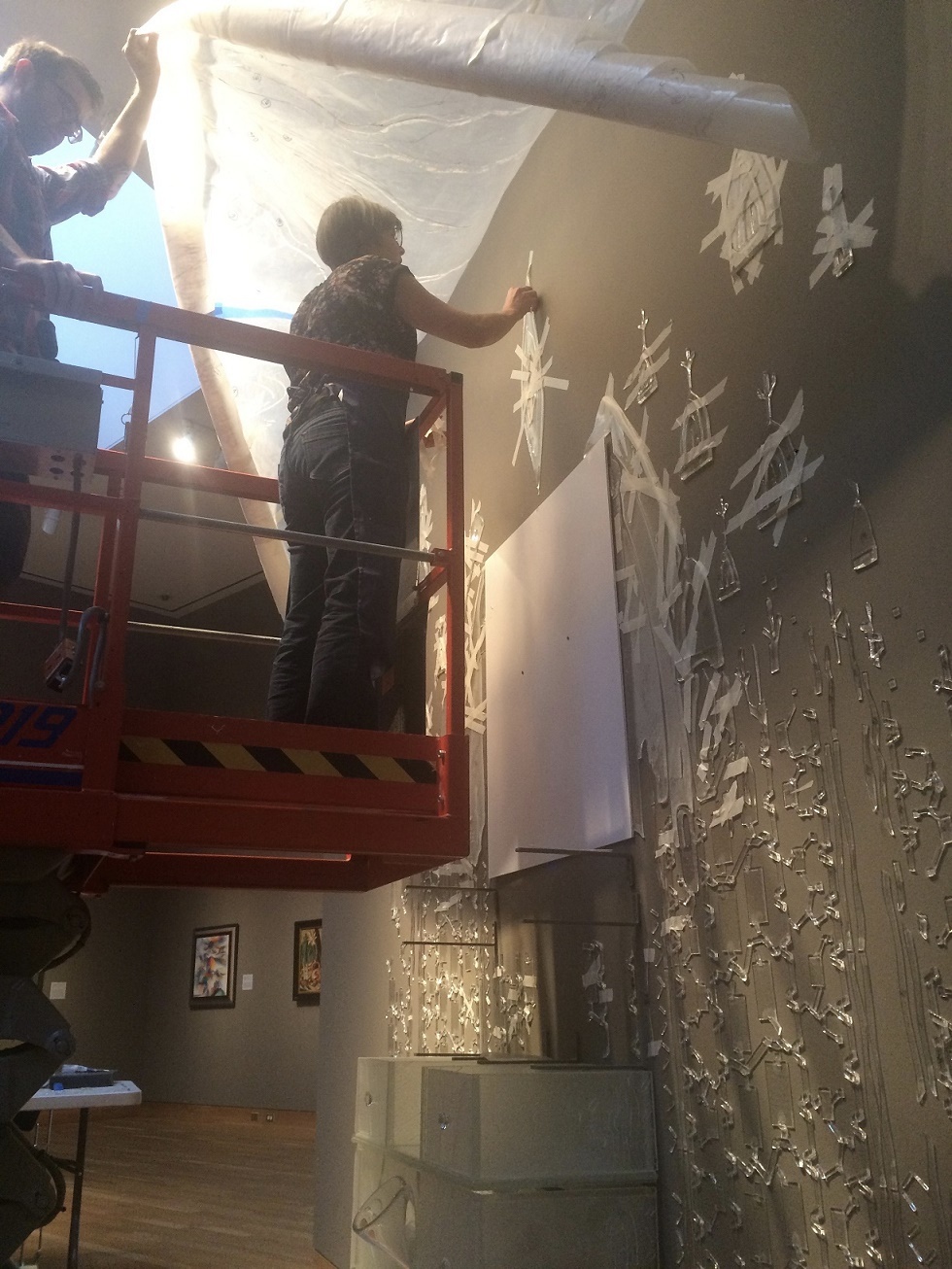 Despite the extensive research and detailed production, however, Lipman said in an interview that she still does not truly know Hartley. Across the span of the over one-hundred years that exist between her installation and Hartley’s life, the objects housed in the Beinecke Library are the only means through which she could approximate his life and personality. Although these objects are evocative and energy filled, there is “a futility there ... How close could I really get? There is so much missing,” Lipman reflected. The wardrobe conveys this futility. Its frosted glass surface prevents viewers from seeing, in detail, the enclosed objects. The only clear viewpoints exist through the glass heart at the center of the wardrobe and the funnel-like pelvic area, features that mark how the wardrobe is an allegory for the human body (the teacup in Hartley’s painting falls at head level “if you are 5’5” like me,” Lipman said). The glass body of this wardrobe is like the human body, Lipman said, in that it is simultaneously permeable and impermeable, knowable and unknowable. She said that we are not only unable to fully comprehend our own bodies, but we tend to forget that not everything is available and accessible. At “this point in time in history, living through the technological revolution we are living through,” Lipman pointed out, we expect to obtain all information upfront. However, this leads to a “passive receptivity” that she thinks is “counter-intuitive” to the viewing of visual art. According to Mullin, glass in Lipman’s work, “embodie[s] the difficulty of seeing not only the past but also of seeing an other.” The question arises: if we are, as Whitman stated, multitudes, can we comprehend and connect every star in the constellation that is self and other? 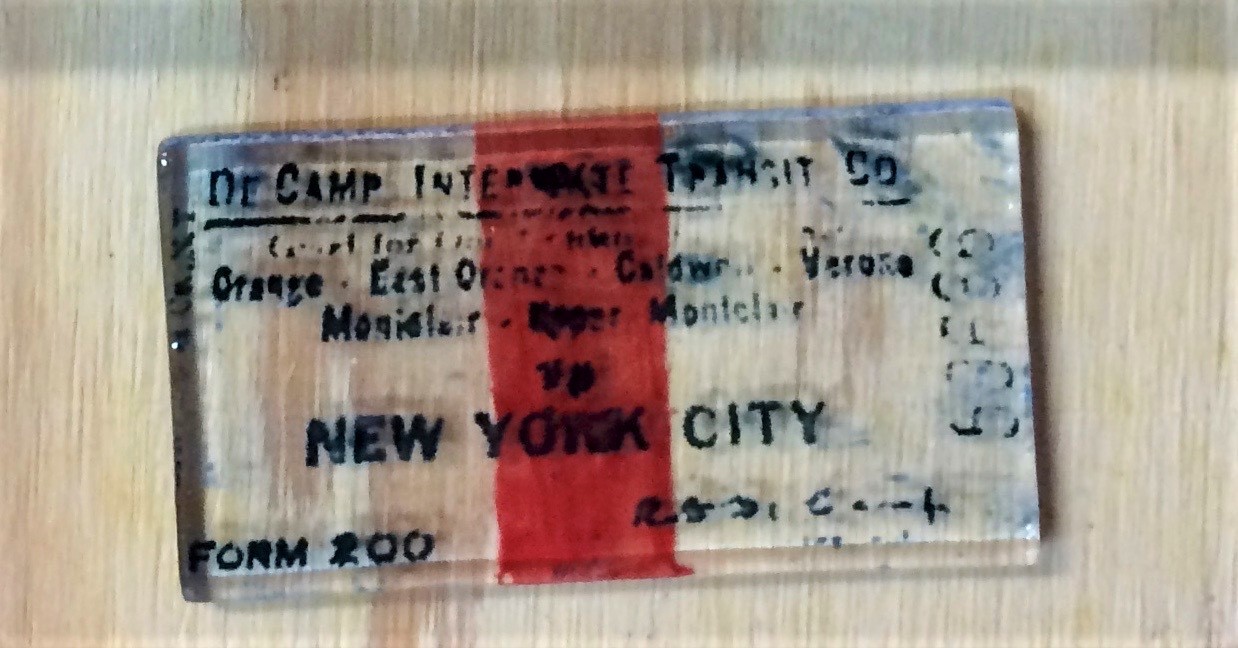 One Portrait of One Man conveys a degree of distance, then, a condition enhanced by the surrounding wallpaper, which depicts an aerial view of enemy trenches. These recall the trenches of WWI, a force that shattered Hartley’s life via both the death of Karl von Freyburg, a Prussian lieutenant he loved, and his forced return back to the United States in 1915 due to the worsening conflict. Lipman noted how Hartley was enamored with German culture. Berlin was, at the time, progressive in terms of its acceptance of homosexuality, a condition that was not the case in the United States. “I needed a way of talking about the way he was controlled and contained,” Lipman said. Mullin pointed out a similar condition: “there is an intense longing at play in [Hartley’s] work. That longing seems to be characterized by a sense of displacement and loneliness.” Glass, both Lipman and Mullin indicated, is particularly suited to meditating on these aspects of Hartley’s experience. According to Lipman,

“the qualities of glass are essential to express liminal states. Its translucency and density illustrates the non-solid state of matter while remaining tangible.”

Glass thus conveys the liminal state in which Hartley found himself: unable to explore his homosexuality in an increasingly nationalistic United States or to return to a Europe where he found personal freedom, friendship, and love.

Interestingly, separate statements by Lipman and Mullin reveal how displacement and separation connect Hartley’s time to the present moment. Mullin pointed out that Hartley “lived in a budding cosmopolitan moment and then through a sharp, reactive turn inward.” WWI led many, such as the writers known as the “lost generation,” to gaze inward and question traditional values in their respective societies; the United States also turned away from the conflict in Europe and introduced more isolationist policies. Similarly, Lipman noted how there is an increase in “navel gazing” and “narcissism” in the present. While a bit different from the inward turn during WWI, this "navel gazing" also creates a degree of separation and absence, as as well as a lack of unity and longing for connection.

However, One Portrait of One Man not only meditates on separation and isolation, but is also an act of connection that defies passive receptivity. As part of the Sympathies series at WAM, it creates “‘sympathetic’ connection,'" which Mullin defines as "two aspects in sympathy with one another in some way.” The trenches comprising the glass wallpaper eventually dissipate into what Lipman calls “female fire symbolism.” Hartley’s One Portrait of One Woman, she notes, encompasses both genders and is thus a “portrait of humanity.” There is a degree of unity, then, despite distance. This is a unity Lipman also created with the use of color, something she normally does not incorporate into her work. Here, color achieves a “marriage between the painting and the clear glass.”Although Lipman was initially nervous about what Hartley would think of her work, she said that all of that doubt disappeared upon finishing the piece, which she sees as a union of two artists: herself and Hartley (Stein, she noted, “is secondary”).

Virginia Woolf, another soul contending with the effects of WWI, wrote, “Life is not a series of gig lamps symmetrically arranged; life is a luminous halo, a semitransparent envelope surrounding us from the beginning of consciousness to the end.” One Portrait of One Man conveys how humans are not easily comprehensible, organized arrangements either. It also reflects on the distance between self and other, an incomprehensibility that requires effort to bridge. And yet, perhaps beyond the ambiguity of self and other, beyond distance and fragmentation, there is a unifying, luminous halo like the glass fire emanating from the top of One Portrait of One Man. If so, then we are all united in this halo whose semi-transparency requires us to actively pursue some understanding our world, ourselves, and each other. After all, it is only out of this active pursuit, like the involved process through which Beth Lipman created One Portrait of One Man, that we achieve creation and connection.