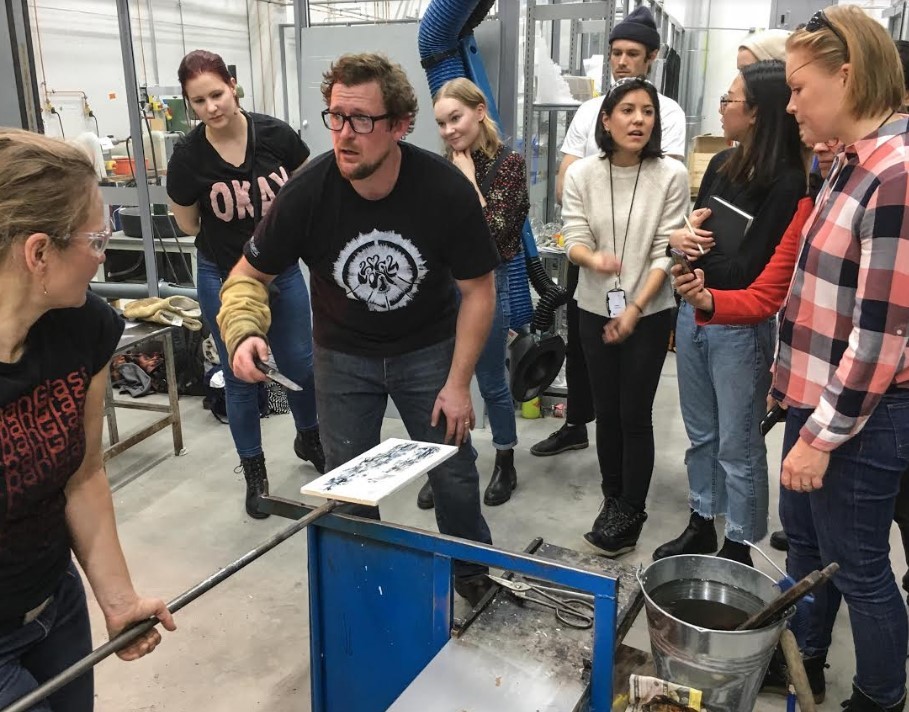 As the economics of handmade glass production are battered by globalization, the centuries-old glass-making culture in Europe is increasingly opening up (see the 2018 Glass Art Society conference in Murano, or the upcoming 2020 conference at Kosta Boda) and looking internationally for ideas of how to reinvent their businesses. One example comes in the story of Jonathan Capps, who graduated from Ohio State with an MFA in glass in 2016. Last year, Capps applied for and was awarded a Fulbright Scholarship to spend a year in Finland working with the Nuutajärvi Glass Village Cultural Foundation (NGVCF), which operates out of a shuttered historic glass factory and was set up to preserve and study traditions of Finnish glass art. Capps was driven by his interest in learning a Scandinavian approach to working with glass, but it quickly became clear that there was an equal interest in his uniquely American approach. The culmination of Capps’ year in Finland came with a group exhibition titled “Why Not? Finnish American Art Glass,” which is on view at the formerly thriving Nuutajärvi Glass Factory through September 1, 2019. Between his studio research and informal artist residency at Tavastia Vocational College (a local glass school) glass school, Capps soon became aware of a strong interest in his own way of doing things. Through his interactions with artists and teachers at Tavastia, and the welcoming embrace of local glass artists and designers, Capps became intimately involved with Nuutajärvi's search for a new type of glass identity.

Nuutajärvi, the glass village Capps lived in with his family, once was the home of a thriving glass factory, notable for Oiva Toikka's glass birds, which was founded in 1793 and shut down in 2014. For a tiny town, devoid of stoplights but with a 200-year-plus glassmaking history, the arrival of Capps and his family was welcomed with neighborly charm and endless curiosity.

Capps noted that the village was at a crossroads for fostering a new identity, a situation he compares to the Rust Belt towns across the U.S., whose economic downturn was facilitated by factory shutdowns. Jonathan mentioned this “strong parallel,” between the small Finnish glass village where he stayed and formerly industrial U.S. cities and towns.

Working collaboratively with the Nuutajärvi Gallery Cooperative (NuGO) and the village cultural foundation, Capps helped to repurpose some of the barren factory buildings to bring back lost energy to spaces that once fostered activity and community. By “reactivating” these spaces, Capps helped to create an art exhibit that explored the potential of these spaces to function in new ways.

“This project won’t live up to its name until it goes past myself— by continuing the network and exchange through further interactions with the community.” Capps told the Glass Quarterly Hot Sheet in a telephone interview. “It’s bigger than me.”

Capps said the exhibition was put together not just by artists, but by their families, as well as others from the village, contributing to the project. The show was distinguished as more than just art because, as Capps said, it “brought history into the contemporary art world.”

One of the core values of Capps’ Fulbright was coming together to open up conversations. The exchange that the Fulbright program offers promises community building. Jonathan did this through his participation as a visiting artist at the vocational college, as well as collaborating with local artists, but it was not a one-way street. In return for his investment, Capps was repaid many times over in the techniques and skills that his hosts shared. The hand-blown molding production technique was a “totally different way of working” for Capps, he said.

“It was like I was on a climbing wall all day, my muscles were burning,” Capps told Glass. “I was so sore from moving my body in a way I wasn’t trained to— It was nice to be in the role of student again. You really don’t know everything.”

Not only did Capps work to build the community around him, but he noted the immense community that welcomed his family and sought permanent connections. Capps said that when setting up the “Why Not?” exhibition, artists were already anticipating a “next time,” to create together. Capps was overwhelmed by families helping to renew the exhibition spaces and set up the installations, going a step further to set up. It's clear the ideas of redefining spaces and a place were critical components for a community on the edge of a new identity.

“Artmaking can be an incredibly personal experience, to come in and expect to inject myself into their personal lives was naive,” Capps told Glass. However, once relationships had been built, Capps said, “I am humbled by how these artists opened up to me.”

The idea of glass as a fine art is not one accepted immediately in Finland, and Capps said this conversation dominated his time abroad more so than other times throughout his career. As the glass community continues to think internationally, it is useful to think about how these conversations can foster growth of glass as a serious medium. “I think for the continuation of glass it’s reinventing itself in Finland,” Capps said. Between an evolving Finnish glass educational approach — which Capps said was a “ripe” environment for glass blowing— and the community of artists that put together “Why Not?”, it appears glass may yet have a future in this village that developed around the fabrication of glass.

“Now it’s a matter of showing Finland and the world that there are exciting things happening with glass,” Capps told Glass.

As for how his experience will impact his future work, Capps noted that any experience living abroad will change perspective on the world, but that, “it will take a while to digest,” before he fully appreciates the extraordinary events he experienced.

Capps, who studied under the late Stephen Rolfe Powell at Centre College, also noted the impact Powell had on his career, and mourns his passing.

“I wouldn’t be here without Steve — he was the first person I learned to blow glass from,” Capps told Glass over the phone. I never felt homesick until I learned of Steve’s loss; it was the first time I realized how far I was from the glass community back home.”

Editor's Note: This article has been updated since it was originally published on Tuesday, June 25th, to identify the names of collaborating artists and to more accurately reflect the dynamics between Jonathan Capps and the Nuutajärvi community of artists, designers, and students.