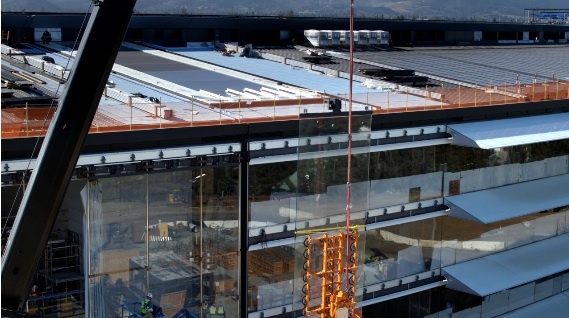 Apple employees will be moving their desks to the much-anticipated new headquarters, Apple Park, sometime in April, according to a company press release, even though the construction process on the Santa Clara Valley, California, facility won't be complete until fall 2017. Billed as one of the world's most energy-efficient buildings thanks to its massive rooftop solar array and a natural ventilation system that is projected to need no heat or air conditioning 9 months of the year, the massive ring-shaped central building designed by Foster + Partners also claims to have the world's largest curved glass panels, which clad the space-ship like structure in seamless sheets of silica. Over 12,000 people will eventually occupy the new complex when it's fully occupied. The main building alone will provide 2.8 million square feet of space.

Set to open later this year is a separate 1,000-seat auditorium whose lobby-entrance is a marvel of glass architecture -- a 165-foot diameter cylinder featuring a 20-foot tall glass skin. Named for Apple's iconic founder, the Steve Jobs Theater will set atop a prominent hillside within the 175-foot Apple Park complex.

The famously secretive company has set aside an Apple Store and cafe that will be open to the public, though the two miles of walking and running paths are reserved for employees, as is the orchard and pond enclosed by the doughnut shaped building.

Take an aerial tour of the building via the video below in which Fortune magazine annotated the official Apple release: