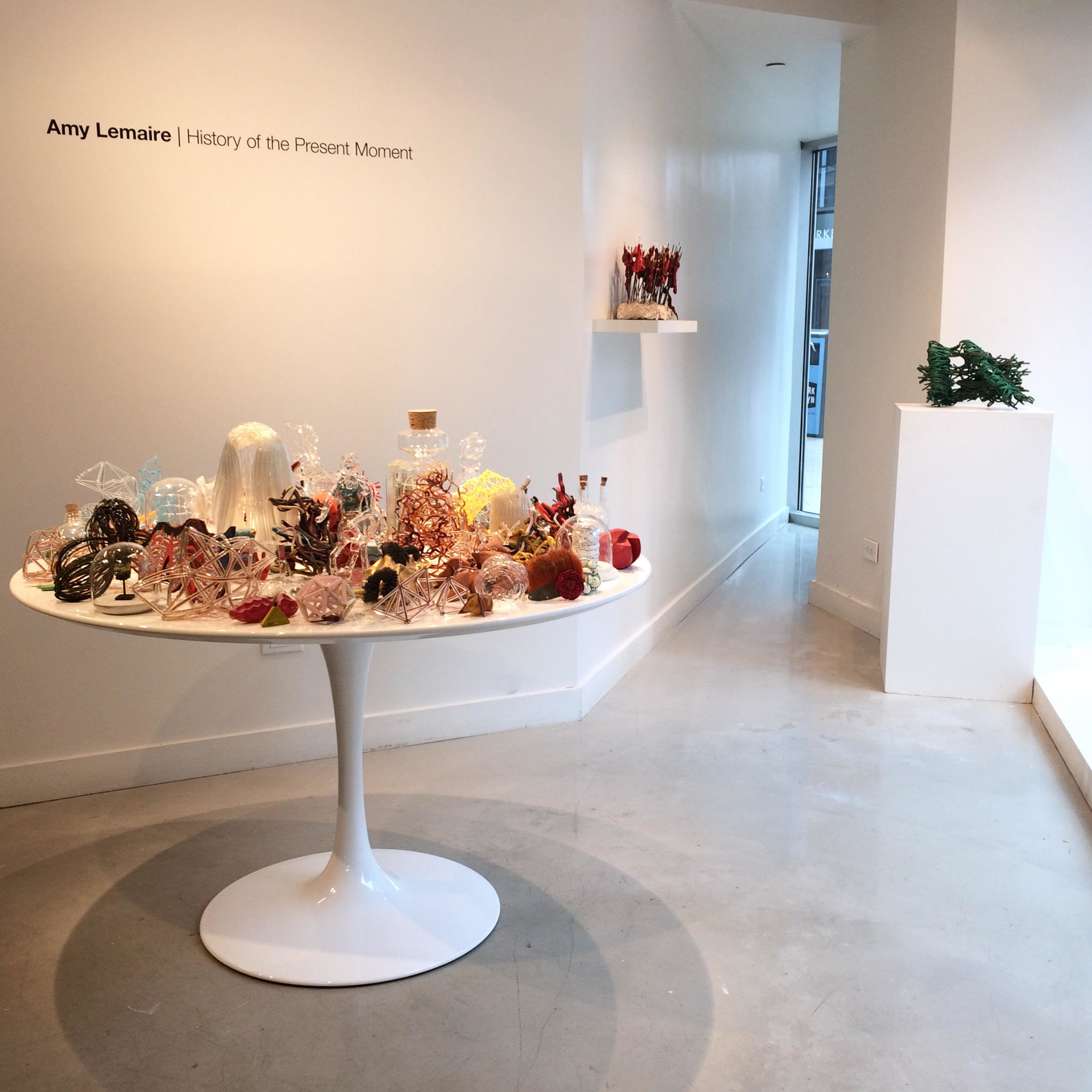 Brooklyn-based multidisciplinary artist Amy Lemaire explores themes of history as a form of currency in her upcoming exhibit, "History of the Present Moment." The exhibition, which will include glass sculptures seeking to ignite thought and conversation around modern historical documentation, will be on display from June 7 to June 28 in the Window Gallery at UrbanGlass’ Agnes Varis Art Center. (Disclosure: The GLASS Quarterly Hot Sheet is published by UrbanGlass.) 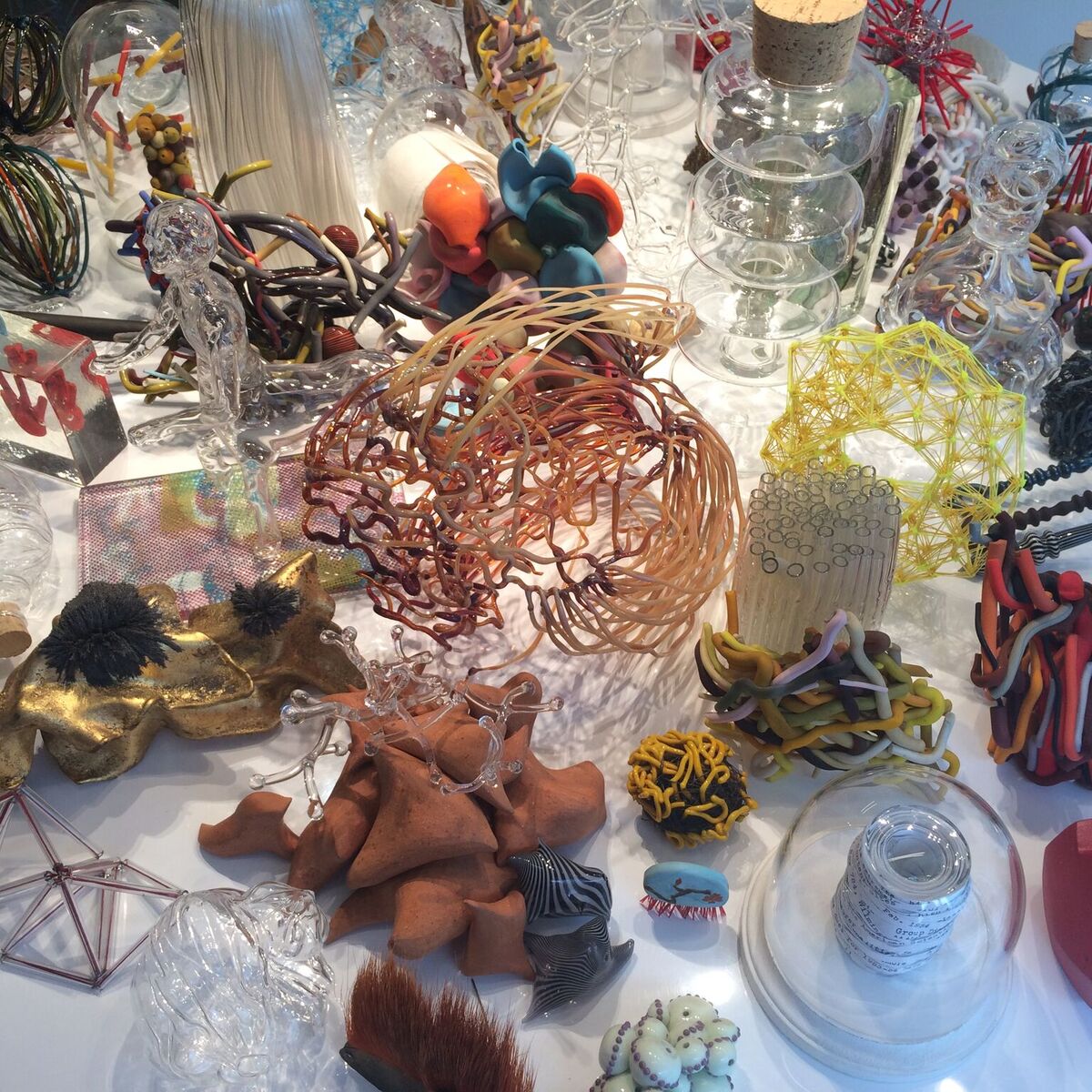 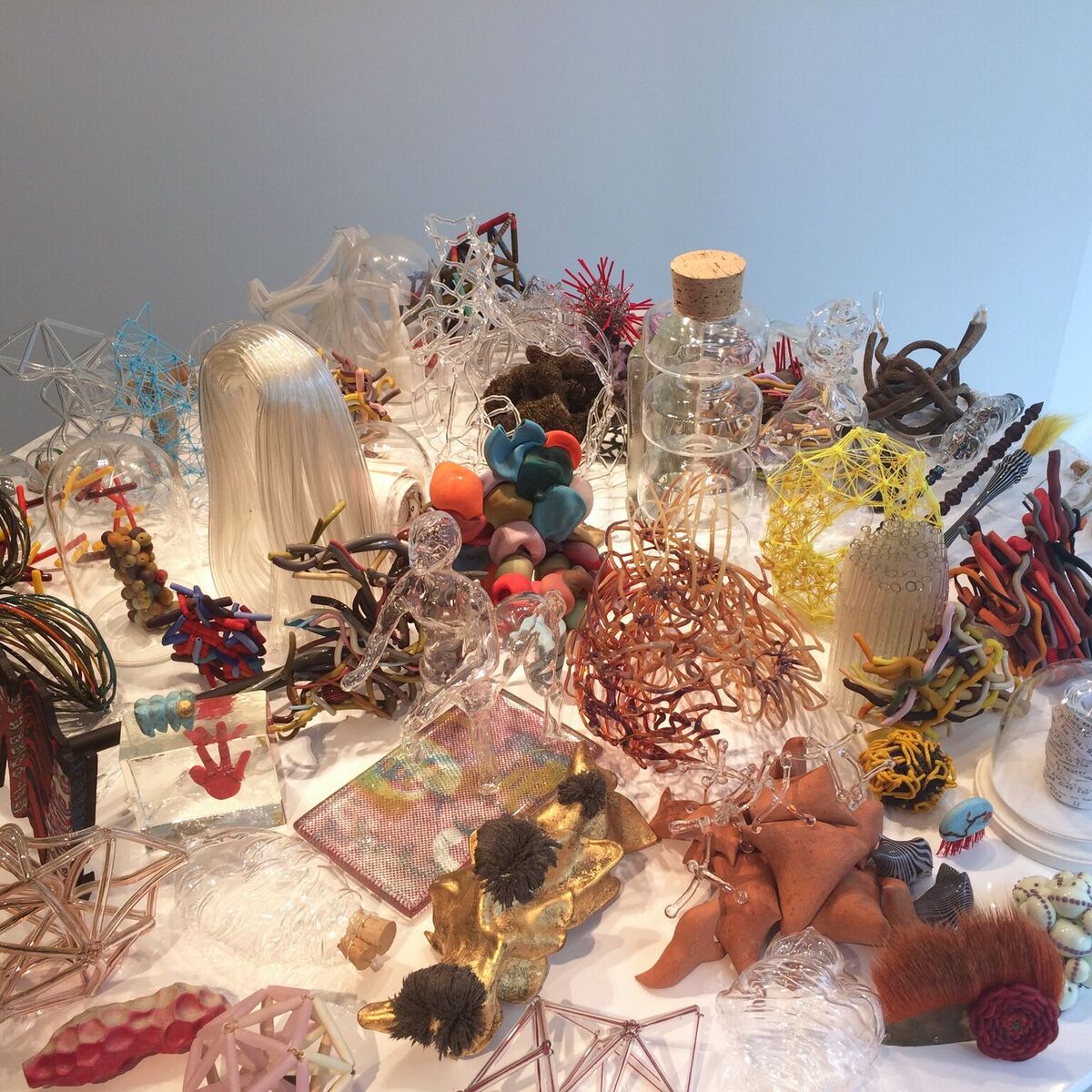 “I’m really considering history as a type of currency, especially in the way we document it,” said Lemaire, whose tall frame is topped by a mane of unruly hair often tamed by a tied red bandana or vintage broad-brimmed hat.

In an extensive and wide-ranging interview, Lemaire, who speaks in spurts of ideas as one thought spurs her to connect to another, said she became “obsessive” in keeping records of her own work, in response to the changing landscape of art documentation with social media and fast-paced news.

“There’s sort of this shift that has happened with the 24-hour news cycle and Twitterverse that affects artists as we’re working because we have sort of direct access to viewers through social media,” she said. “So the currency of history is changing and we are currently in the process now, culturally, of renegotiating how we are going to decide what’s important historically.”

In the past, the act of deciding what was important and organizing that information was delegated to archivists and curators.

“But we are no longer using an empirical narrative with a single voice for art history. Now, it’s like totally decentered, it’s like a data field,” Lemaire said.

Lemaire’s personal narrative played a major role in "History of the Present Moment." Many of the objects in the exhibition were accumulated during her travels along a self-constructed trade route from 2010 to 2016, in which she visited art communities in multiple cities to exchange objects, information and history. The objective of her journey was to experience a life comparable to that of a trader living hundreds of years ago.

“When you live the experience for yourself, you get into the emotional content of what it feels like to be on the road for a long time,” she said. “To have these objects and to care for them, and to exchange them and let them go and decide what their values are.”

Her exhibition will feature 140 small-scale sculptures installed on a table -- each piece bearing immense personal significance to her, which previously served to facilitate conversation and exchange with people she encountered along her route. Most of the glass used in the exhibition was given to her in a trade for oral histories.

The work, "Family Tree” features glass that originally belonged to a little-known South Jersey paperweight maker, whose collection was passed around until it ended up with Lemaire. She is a self-described collector of "odd glass with interesting properties" that she then incorporates into her work. 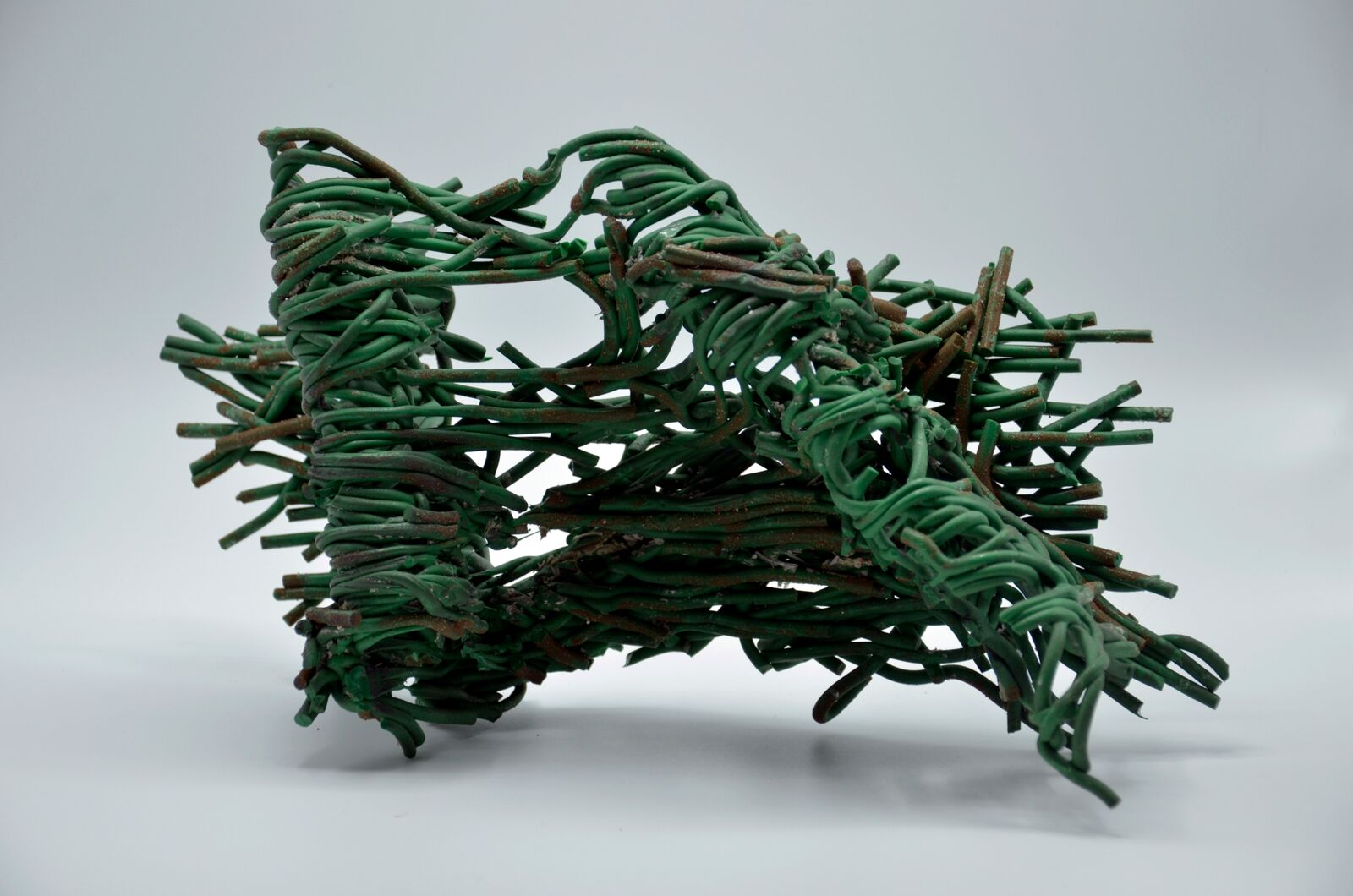 Her work portrays visible evidence of movement through time and space -- getting scuffed up as she traveled with and used them for her classes and demos. Lemaire views these signs of wear and tear as endearing symbols representing the objects' historical lineage. The work in the exhibition is intended to be viewed from different perspective points, intertwining to form a nonlinear story, which she said demonstrates how one might navigate through a data field of historical facts.

Because of the limits placed on her creations while traveling, Lemaire said that she came to think of these objects as “sculptural tweets.”

“When you do a social media post, there’s content there, but you have limited space and attention for your viewers,” Lemaire said. “But it’s also a way to kind of draw somebody into a whole account where you can then go and find more information at your leisure.”

Lemaire’s fascination with the “digital now” of the social media-- which she called a “conflation of past, present and future all together into this weird present”-- led her to switch up her usual processes.

To encapsulate a feeling of urgency in the present moment, she decided that instead of rendering a form, she would accept the results of whatever came to be. This is displayed in her larger works, in which she implemented partial firings to create a frozen effect. 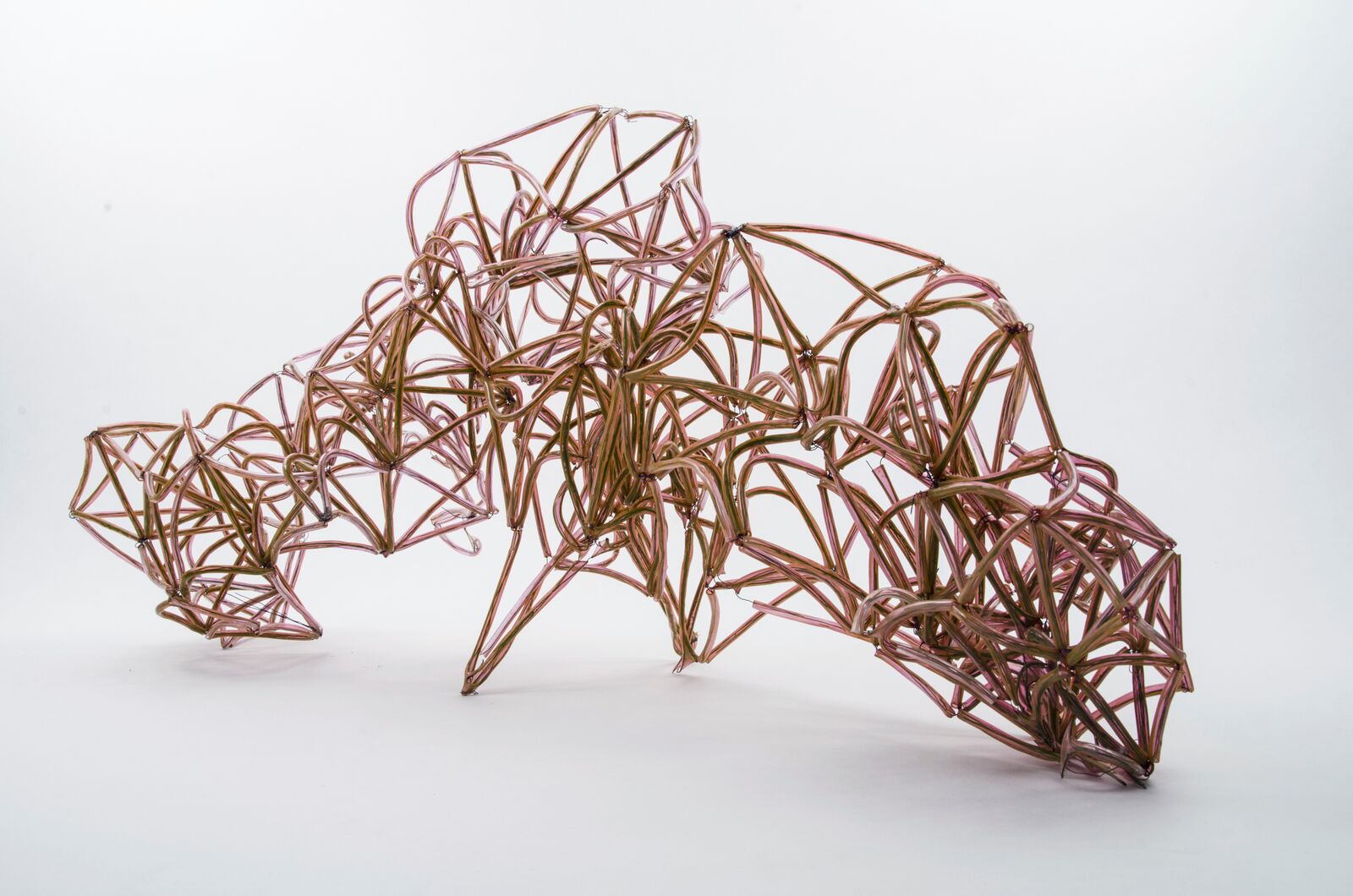 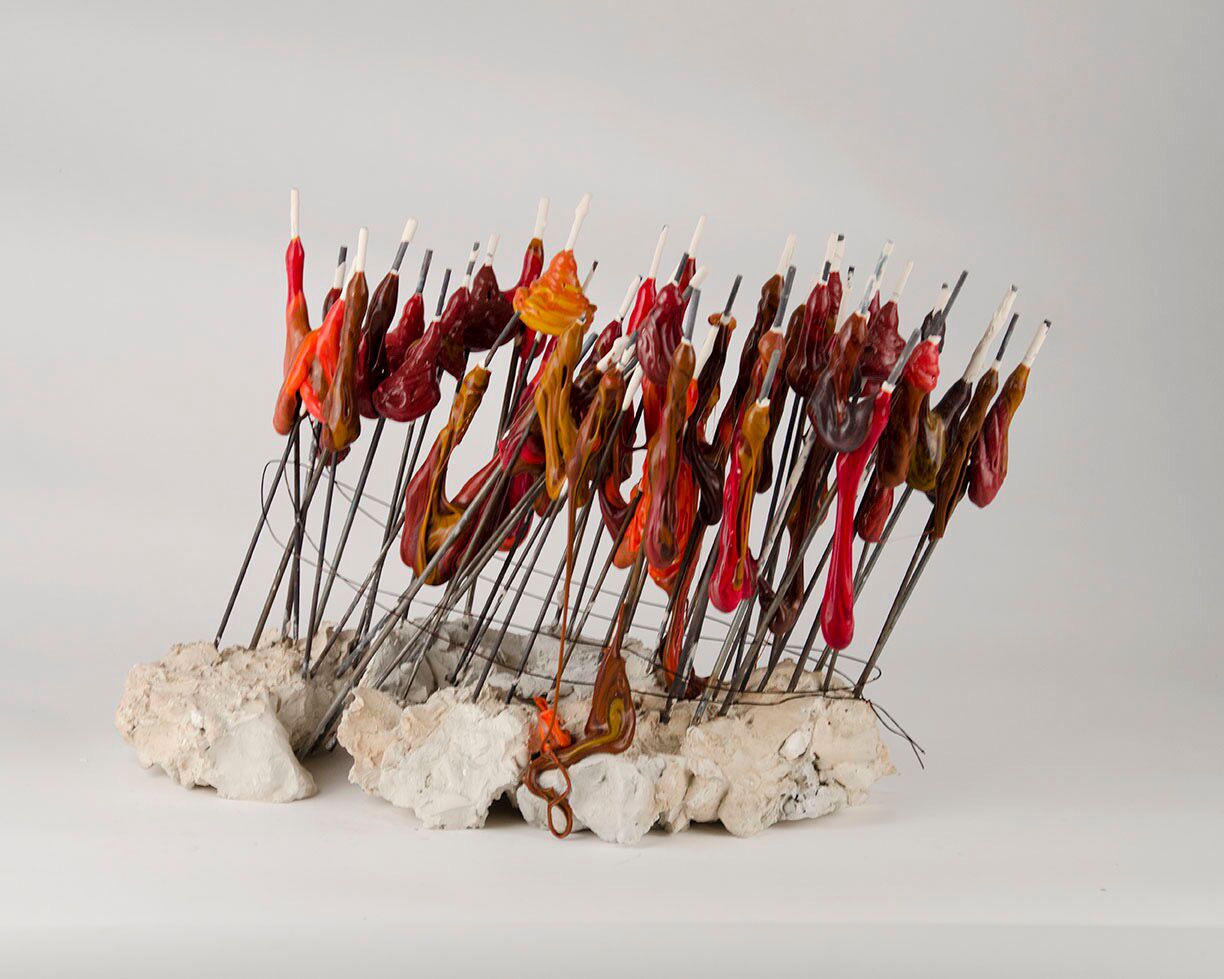 “The present moment is so elusive because by the time I’ve said the words, it’s already passed. So it’s sort of this elusive moment that never really happens, and we have this digital now that’s sort of like everything all at the same time, but none of it,” Lemaire said. “These are all attempts to try and get closer to that idea of being present, both in my work and in the world.”

As electronic transactions take precedence in American culture, Lemaire hopes that her work will serve as facilitators of face-to-face transactions of information and conversation among the audience.

“So, come to the show, exchange information with other people,” she said.