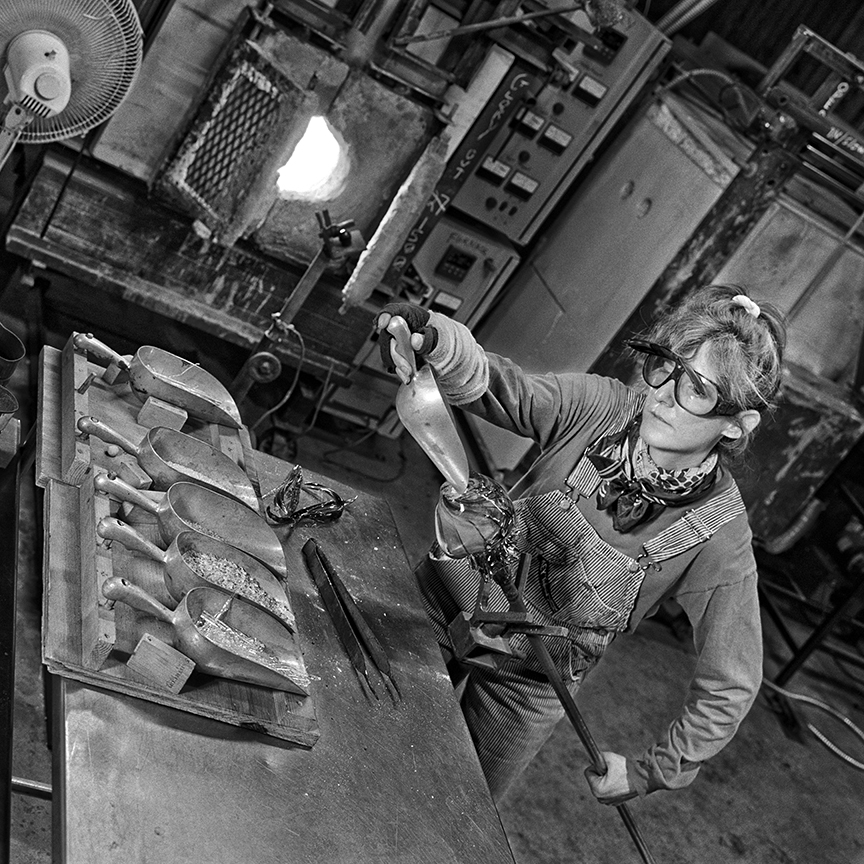 GLASS Quarterly Hot Sheet: What are you working on?
Sally Resnik Rockriver: In the past, I made geochemical reefs growing on underwater architecture. This theme has come back to me, except the lost city is not Atlantis, but one from our future. My new pieces have buildings that are overtaken by creatures from another place in time. I am making structures out of refractory materials and clay. I then kiln-fuse these walls with ceramic glazes and blown glass. The body of work is a group of scenes which tell the story of tension between the past and future. In these pieces, otherworldly specimens encounter the confines of an aging society. As a resolution, the bricks expand to allow enough space for new formations.

The final presentations will be framed wall mounts, barely contained landscapes, and video expeditions. I use glass columns, vessels, and lenses encrusted with ceramic glazes. I refer to the glass tubes as "geocores" because they have a central handmade geode. I think of these as planetary core-samples. In this project, they are the seed pods of geochemical creatures. The vessels are embedded in sand and are part of a landscape with deep craters. I also position them upside down and slice their walls to create a cave space. The lenses magnify surfaces and become glowing life cells. Calcite ceramics and glory hole floors provide a skeletal space with glass lakes. In different situations, these natural formations collide with architectural structures.

My past experience has a strong influence on the subject I choose now. For over a decade, I thought that the reactions in my studio could occur on other planets. I made planetary storms and envisioned silica falling from the sky and bubbling as it landed on the ground. In 2013, NASA announced the existence of a real planet that rained glass. They found that Planet Azure had an atmosphere that circulates sand and flux agents. Finally, my theories had become actual possibilities.

The endeavor of making work that was far from mainstream caused me to explore the idea of limitations. I am enacting conflicts that arise as new life forms infiltrate pre-existing structures. The pieces are a metaphor for the struggle involved in breaking new ground or trying to survive in an outdated framework. The whole idea reminds me of a hermit crab seeking a bigger home. This new work challenges human constructs. Any edifice in my landscape is overgrown by extraterrestrial geology. Structures disintegrate as they collide with thermal forces. Bricks try to confine the growths, but are not strong enough. This is a broader commentary on the expansion of human knowledge. Also, it is a physical example of the way in which art is evolving beyond existing limitations. Like the crab's shell, barriers erode when they no longer serve a purpose.

The relationship between narrative and material is direct in my work. First, it is important to understand that the rocks are chemically real; they are not representational or abstract. In my mind, these geochemical occurrences create their own reality. I call this "narrative material realism". There is a marriage of narrative and materials in this approach. I select processes that can best execute my ideas while using materiality as part of the subject.

Pieces feel decrafted because I want the artist's presence to be transparent. I am creating thermally conflicted conditions which are barely manipulated by the human hand. I resist refinement as part of the honesty in my discipline. However, there is still much intent, as I try to create the notion of a geospecies in the midst of transition. My stories are also inspired by changes in the human viewpoint. Over the centuries, our beliefs have evolved along with new scientific facts. When we discovered that the world was round, this had huge impact on broader thinking. As we currently explore beyond this planet, I wonder if our human centric position will partially dissolve.

Today many young people accept the possibility of other life and assume the existence of extraordinary planets. My children have a perspective that very few did when I was their age. I asked them if other kids think outside of the human framework. They confirmed that some of their peers assume there is a world somewhere that has lifeforms we cannot imagine. Realistically, they expect it is very far away and time travel is impossible.

In this era, our information base has multiplied. With this comes an evolution in human thought. I am interested in how culture changes as knowledge expands. Astro-science has developed in the 21st century due to photo exploration of the Universe. I also see changes happening in Art, as we exhaust our approaches. Hybridizations in art create mutations in concepts and materials. The pieces I am working on reflect a type of expansion in Art as well as Science. .

GLASS: What have you seen or experienced recently that inspired you and influences your current work?
Sally: The biggest influences on my work have been the notions of "reticulate evolution" and "pluaralism." I revisited these topics when William Warmus introduced them during a Glass Secessionism discussion. These terms explained much about my road as an artist..I was astounded by the connections when I researched the different types of reticulate evolution. Generally, it is the rapid formation of new species as a result of cross-breeding. I realized that over the years, my work was undergoing evolutionary processes. Warmus also hinted that this theory exemplified changes in the art world. I became more aware of this when I did a recent project using hybrids of glass and ceramics. They were reconstructed as landscape images that the viewer travels through via video.

Although multi-media work dates back to Marcel Duchamp and Meret Oppenheim, deep cross-pollination is more prevalent than ever. Out of a necessity to realize my vision, I rejected expected techniques, material limitations, and compartmentalization. I had not recognized that my work embraces a type of "plurality" in art. Plurality uses a diversity of approaches, rather than a single method or system. An obvious example is the fact that I combine many materials. However, as I further examined pluralism, I came to accept the diversity of my path, rather than try to justify it. I have developed a language that works for my purposes. When I break pieces, it is not an act of defiance, but one of self-definement. By understanding the way in which I treat glass, I develop my own working rules. I originally broke open geocores to reveal their interior without the mark of a tool. Now, when I do cut my pieces, it implies that they are dissected specimens. By understanding how my own systems operate, I am able to move forward and abandon doubtful questioning.

Finding terminology that I can relate to has helped me to embrace my work for what it is, rather than explain what it is not. Studying reticulate evolution and pluralism gave me a clearer idea of what I have been doing. For me, the new brickwork represents an established external system. The geochemical formations are evolved species that exist in this environment, while fighting for a pluralistic world.

GLASS: Where can your work be seen?
Sally: I will have an exhibition at the Brentwood Arts Exchange, (near the Washington Glass School) from Jan 12 through Feb 28th, 2015. I'm also exhibiting every March in Brooklyn as a member of A.I.R. Gallery, along with extra shows there in June and December. And my work is available year-round, at Gallery C in Raleigh, North Carolina, with solo projects every few years.