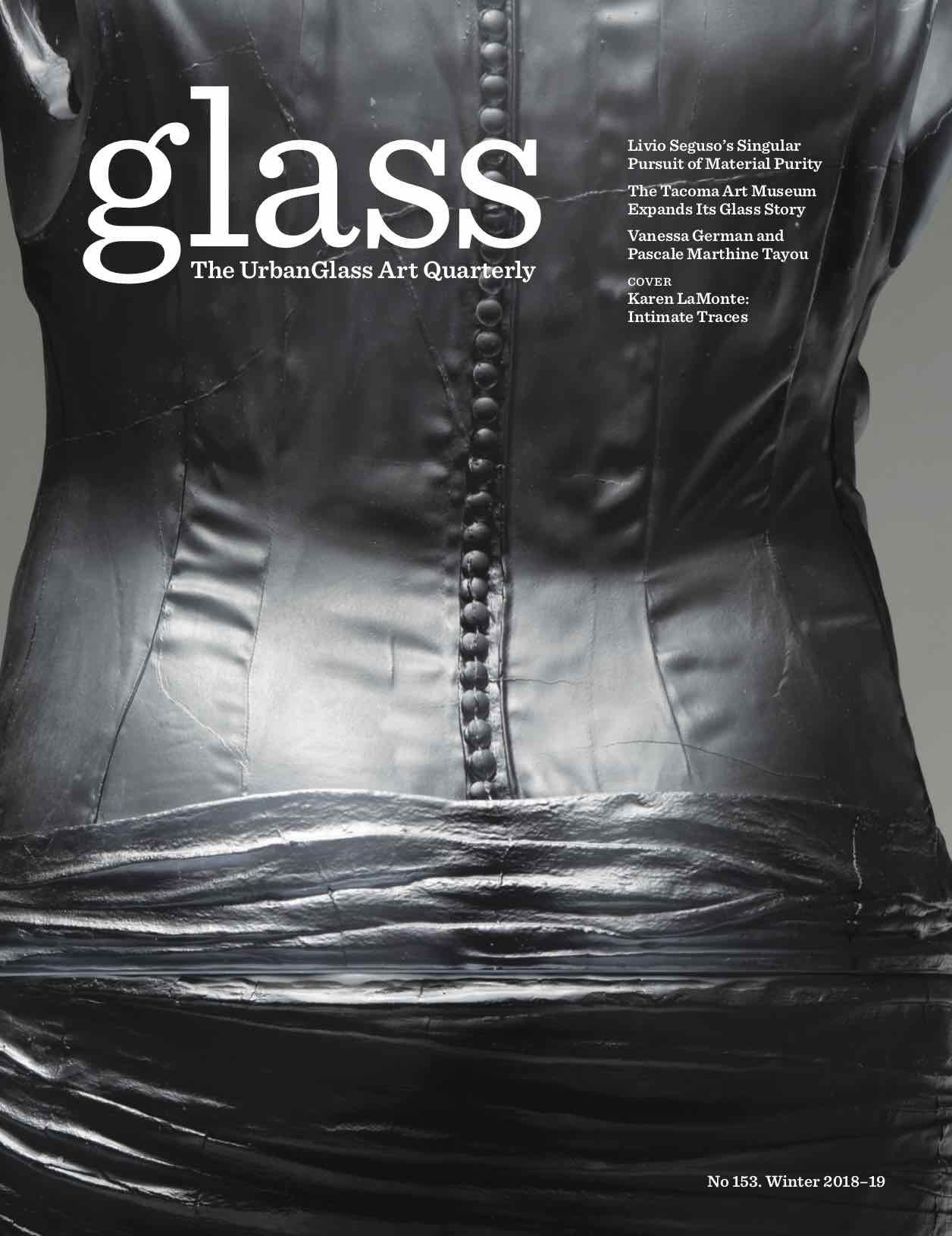 Tailors and fashion designers pull fabric taut or let it drape, either defining the body or hiding it. With the right seam or tuck, cloth lays flat or forgives imperfections. Darts, pleats, and the weave of the material are the elements of engineering, letting clothing follow the body’s contours, revealing the flesh behind it or concealing it, curtaining off defects or asymmetry. In her extraordinary cast-glass sculptures, Karen LaMonte ponders this dual ability to reveal or conceal, but takes it another step by removing the body that wore the clothing. All that is left is the record captured in the fabric, hovering specter-like in translucent glass. Over two decades, LaMonte has refined her inquiry along with her ability to render the complex geometries of draped fabric, encasing the feminine body in a second skin of ever-more-elaborate costumery. The flowing, flowering objects that remain from her elaborate mold-and-cast process are pondered in this issue’s cover article by writer Chelsea Liu, who seeks answers to the metaphoric and metaphysical questions raised by LaMonte’s dresses in an extensive interview with the artist. We present this conversation and analysis just after the artist’s largest solo museum exhibition to date.

LaMonte shows how glass is uniquely suited to explorations of the visible and invisible, but in the very different work of Vanessa German and Pascale Marthine Tayou, it is another type of presence and visibility that is revealed through the material. The issue of racial identity occupies a central role in both of their practices and has led each to incorporate glass elements in their figures, which curator and critic Vicky A. Clark connects to African religious vessels, powerful characters that mete out justice or protect, both of which are very much in demand in our contemporary political landscape.

Livio Seguso left behind the traditions of the Muranese glass houses, where he apprenticed before working his way up to the title of maestro, as he embarked on a journey to the essence of glass itself. Shane Fero traces Seguso’s quest for a type of sculptural purity, which led him to mixed-media works pairing glass and steel, stone, and even wood.

In our final feature, we take a look at the Tacoma Art Museum’s new wing, built to house the major gift from art patrons Rebecca and Jack Benaroya. With the donation of more than 300 artworks, as well as the funding to expand the galleries, this regional museum is burnishing its national profile. We present an inside view of the new Benaroya Wing, set to open in January. With it, TAM sees itself as one of the top five U.S. museum collections for Studio Glass. It is specifically the story of glass in the Northwest, a tale in which Dale Chihuly plays an outsized role, which defines the curatorial mission.

Kait Rhoads explores monumental scale in museum-window display; Christina Bothwell rebuilds after a fire destroyed her studio; Dan Clayman talks about his faculty appointment at the University of the Arts in Philadelphia; James Carpenter uses glass to open up the museum at the foot of Eero Saarinen’s Arch in St. Louis.

Getting to know 2018 Visiting Artist Fellows Monica Cook and Doug Johnston, and how they've been using their year-long residencies at UrbanGlass.

Is there a regional approach to casting glass in Massachusetts?

The absent bodies Karen LaMonte immortalizes in her cast-glass works are animated in intimate detail, creating a paradoxical presence that resonates with poignancy and longing.

Uncompromising in his focus on the essence of glass, Livio Seguso left behind the traditional glass houses of his native Murano for a unique sculptural path.

With the addition of its soon-to-open Benaroya wing to house a major glass-art collection gift, the Tacoma Art Museum raises its profile as the keeper of the region’s studio-glass story.

by Vicky A. Clark