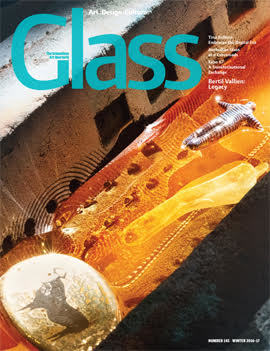 The sight of molten glass taking shape at the end of a pipe fills seats at demonstrations. Frozen in mid-melt, kiln-formed glass transfixes viewers at galleries. Its unique plasticity gives glass a powerful role as a record of transformation, an aspect with great metaphoric potential. The inspiring mutability of glass comes to mind when considering how the field of glass art and design is undergoing a period of profound change. Demographic shifts in the loyal collector base that sustained its growth for decades are reshuffling the economics and forcing innovation in galleries and artist studios. New technologies are competing with, if not displacing, hot glass studios as the showpieces of college and university art departments. And the steady march of globalization is finally encroaching on price points at the high end of design, putting long-standing glass houses in Europe under pressure.

The feature articles in this edition of GLASS, while spanning the globe, could be grouped under the heading of  “a field in transition.”

Sculptor Bertil Vallien, whose career has balanced the dual roles of artist and designer within a factory system, is now an integral part of keeping Sweden's Kosta Boda afloat in an age of globalization.

In her art practice and role as Pilchuck’s artistic director, Tina Aufiero embraces new technologies and approaches in pursuit of pure expression.

Is the high-water mark for Australian glass ahead or behind?