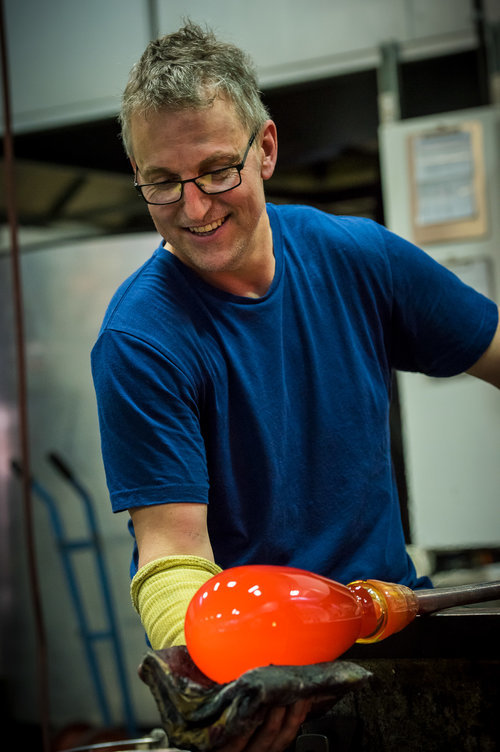 Tim Edwards in the studio.

For it's 20th anniversary, the Art Gallery of Western Australia's Tom Malone Prize has been awarded to Tim Edwards, an artist who grinds and carves blown glass to create works with visual complexity that play with depth of field and dimensionality. Edwards took top honors, and a $15,000 (AUD) prize, for his 2021 work Ellipse #8, which challenges viewers to discern whether it is two- or three-dimensions.

“It’s a quiet work whose form amplifies Edwards’ command of his craft and his vision. In this regard it is so clearly a work by an artist operating at the very height of his powers. There is nothing arbitrary about it at all; the form is perfectly resolved and intentional. This extends from the vessel’s hip and shoulder shapes, to the balance of colour, to the finish, to the even wall thickness. These elements are cleverly rendered but not for cleverness sake; they do not signal material flair alone. Instead, they are the hard-won vehicle for a meditation on the flows of light, the sensation of perception and being wholly in the world, and the importance of surface in allowing viewers to form an intimate connection between our bodies and that of the object. Employing stone wheel cutting to finish the work, it is a piece that is heavily and gradually laboured yet brilliantly fresh and light. Its quietness is alive and wonderfully of this moment.”

In honor of the two decades of the Tom Malone Prize, this year's finalists will have their work exhibited alongside the prize-winners of the previous 19 years. The exhibition will remain on view at the Art Gallery of Western Australia through July 31, 2022

Edwards began his career as a ceramicist, but his connections to JamFactory, led him to study with Nick Mount, and a pursuit of glass art. Edwards continues to work at JamFactory as both an artist and a studio tech, and he shares a home studio with his partner, Clare Belfrage.

He has a strong connection to JamFactory, first participating in a traineeship in Ceramics in 1992 with Stephen Bowers. He went on to complete a traineeship in Glass with Nick Mount, both mentors have played a significant role in his development. Tim also worked as an artist at Blue Pony studio from 2001 to 2008.

He now works as an artist and glass studio technician at JamFactory, and shares a home studio with partner, Clare Belfrage.

The Tom Malone Prize was initiated in 2003 by Governor of the Art Gallery of Western Australia Foundation, Elizabeth Malone. The Prize continues in 2018-2022 through the support of Foundation Benefactor, Sheryl Grimwood.