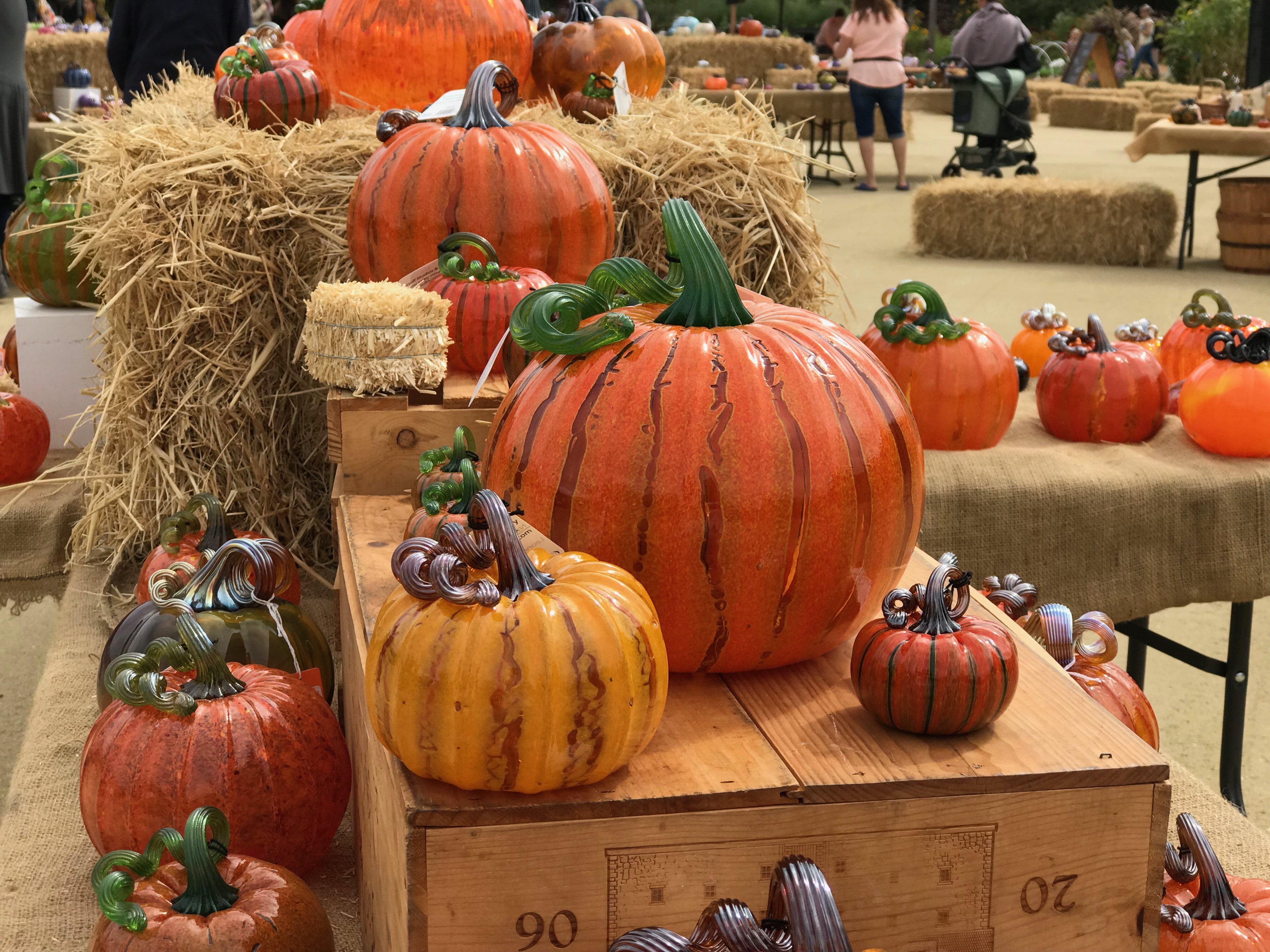 Orange, traditional pumpkins are only one of the styles for sale at the Glass Pumpkin Patch of Carmel, but it's the style where most artists and collectors make their start. courtesy: nick leonoff

The year was 2007. Thousands of colorful glass pumpkins -- from traditional orange to iridescent rainbow in all different sizes -- glinted in the autumn sun. Just outside the field in Palo Alto, California, a line of eager customers was jockeying for position, waiting for the official start. The pumpkins had been on display all week in advance of the kick-off of Great Glass Pumpkin Patch 2007, but this was the first day of sale. What took place next, according to glass artist Nick Leonoff, could only be described as a “frenzy.”

He watched as a couple, who’d clearly been scouting their plan of attack all week, began running across the field to nab the pumpkins they wanted most. When they couldn’t get their hands on the pumpkins they planned on, they had back-ups -- which they ran after next. It was Leonoff's first year participating in the Great Glass Pumpkin Patch, which has been held since 1996, and he was shocked at the passion of this couple and the hundreds of other people that day who battled it out for their favorites.

The now well-established fall phenomenon of the glass pumpkin sale goes back to the very first Great Glass Pumpkin Patch an additional decade earlier. The idea of an overflowing glass pumpkin “patch” originated with Bobby Bowes and Mike Binnard, the founders of the Bay Area Glass Institute (BAGI). They thought up the Great Glass Pumpkin Patch, which they ran in partnership with BAGI, for the first time in 1996.

Binnard, an MIT alumnus, brought the program to the MIT Glass Lab in 2001, which Peter Houk has been director of since 1997. About ten glass artists from BAGI flew out to instruct MIT students how to make the glass pumpkins, creating a fun atmosphere in the process of what Houk called “one of the ultimate team activities,” and it has since become a fundraising staple of the Glass Lab program that also functions as a team-building exercise.

“The team members have to coordinate their timing so that things are happening properly in sequence, and they have to communicate about things like timing, what colors are being used, et cetera,” Houk told the Glass Quarterly Hot Sheet. “There is constant dialogue, especially so when newer students are on the teams and instruction is being given at the same time that production is happening. It can be pretty intense!”

Both programs have continued to make the glass pumpkin patch a significant part of their work, and their income.

In 2019, the MIT Great Glass Pumpkin Patch that took place in September sold about 1,600 pumpkins, and Houk says it’s the Glass Lab’s “sole source of funding” apart from alumni donors. That’s something they’re hoping to change with more diverse fundraising events in the future.

The Great Glass Pumpkin Patch in Palo Alto sold over 10,000 pumpkins this year, and funds support BAGI and the Palo Alto Art Center.

In addition to the fundraising of larger organizations, smaller studios around the US also create pumpkins for sale. For them, these sales contribute significantly to the studio’s income and tend to benefit other local businesses, too.

For Michelle Plucinsky, co-founder of Glass Academy in Dearborn, Michigan, selling glass pumpkins is primarily about the idea of the “Harvest Festival,” representing the bounty of the harvest and celebration of autumn. This harvest experience includes live glassblowing demos and partnerships with other local businesses.

Since their beginning in 2009, the artists at Glass Academy have used pumpkins to play around with color palettes and style.

“Our first pumpkins were all orange with black stems, and I look at the pictures and I just giggle,” Plucinsky said. “Now there’s fantasy pumpkins that are blue, there’s a Van Gogh pumpkin with these swirls, there’s an iced line that’re all crackled pumpkins.”

The most notable of these unique pumpkins is a signature pumpkin created every year for sale at $100: this year, the “American Jewel” is a transparent royal purple, topped with an elegant, curled stem of gold or green.

Selling unique and branded pumpkins creates the most financial success for a business like Glass Academy that does business primarily with their community. Most of their customers are loyal to the business, and they return every year to build their collection or buy gifts for friends and co-workers.

Nick Leonoff’s Glass Pumpkin Patch of Carmel is another community-based event for the sale of glass pumpkins. He has continued to partner with the artists in Palo Alto for their event every year, but began the Carmel patch in 2013 as a way to give back to his community. His event, which partners with environmental program MEarth, includes live music and food and drink from local restaurants and breweries.

Many places across the country prioritize the intimate, community-based events like the harvest festival and local pumpkin patch. 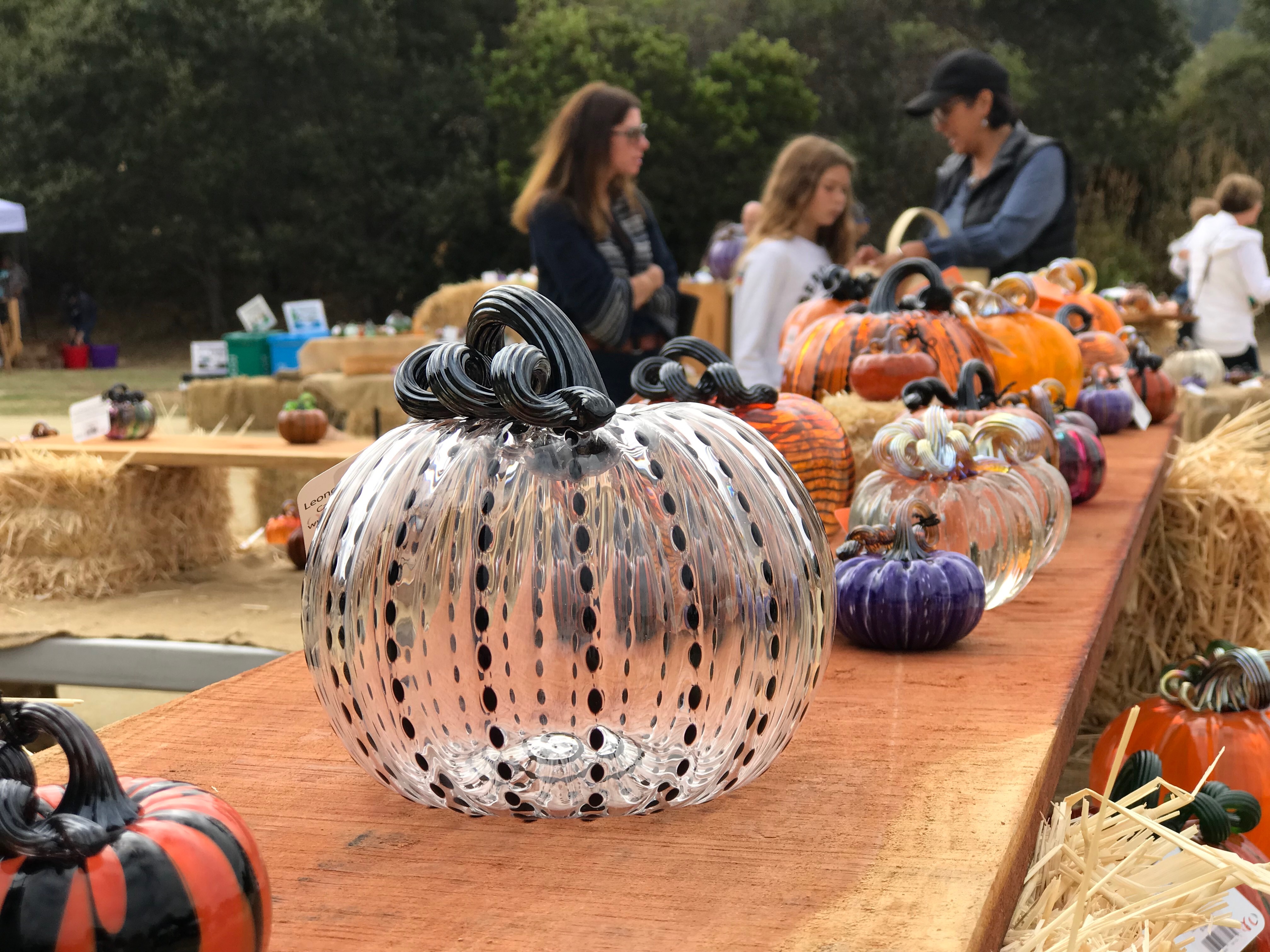 Luke Adams, whose Massachusetts glassblowing studio is the largest handmade producer of glass pumpkins in the United States (according to Adams), conducts his sales in a completely different way. He and his eight-person team currently make about 400 pumpkins every day, and reportedly sell over $1 million worth each year.

Adams does his business mainly online and for various retailers and catalogues. He started attending retail shows in cities like Philadelphia and New York in 2005, and grows his customer base with each show he attends. Two of the most important shows for his business were the New York International Gift Fair (now called NY NOW) and Atlanta Gift Market. Each of these doubled his studio’s business.

His customer base doesn’t present a challenge, after years of growing. Instead, he and his team face the fortunate problem of keeping pumpkins in stock, with about 1,000 wholesale customers and those who buy individually. They create year-round; in the slowest month of off-season, his team produces a minimum of 2,500 pumpkins.

Adams’ pumpkins are known for their bright, sophisticated colors and ribbon-like curled stems, and they make highly appealing decorations for retailers and customers across the country.

“They reappear in all kinds of funny places,” Adams, who has been making the pumpkins since 2003, told HotSheet. “I've seen my pumpkins in architectural magazines in the background on shelves. We got a call from a friend who said they had rented Christie Brinkley's house in the Caribbean, and she had our pieces displayed in the house. Lidia Bastianich, the chef, called us a few years back to make centerpieces for each of her tables at Felidia on East 58th in Manhattan.”

The demand for these pieces is extremely high -- and not just from organizations like BAGI, or studios like Plucinsky and Adams’. Whether it's a Pottery Barn candleholder, or a Williams-Sonoma punch bowl, the glass pumpkin has become a popular decor item that is no longer exclusive to seasonal events. It serves as further proof that the popularity of glass pumpkins has expanded beyond art and into the mass-produced and mainstream.

The question remains. Why have glass pumpkins become so popular?

Adams believes it has to do with the fascination humans have with beautiful things.

“With clothes, you see accessories as highly desirable fashion objects,” Adams said. “That’s the same thing a customer is thinking of when they come to buy something like a glass pumpkin.”

Leonoff believes it has to do with the power art holds to create a response in the viewer. And, unlike other forms of glass art, he says the glass pumpkins have an “affordability and approachability for getting people’s interests into glass.”

The pieces have become an integral part of the glass world regardless, and it’s likely they’ll remain an important part for years to come—in the lives of consumers and artists alike.

“I've done a lot of things in my life,” Adams said, “but they are probably gonna carve a pumpkin on my tombstone after I die.”