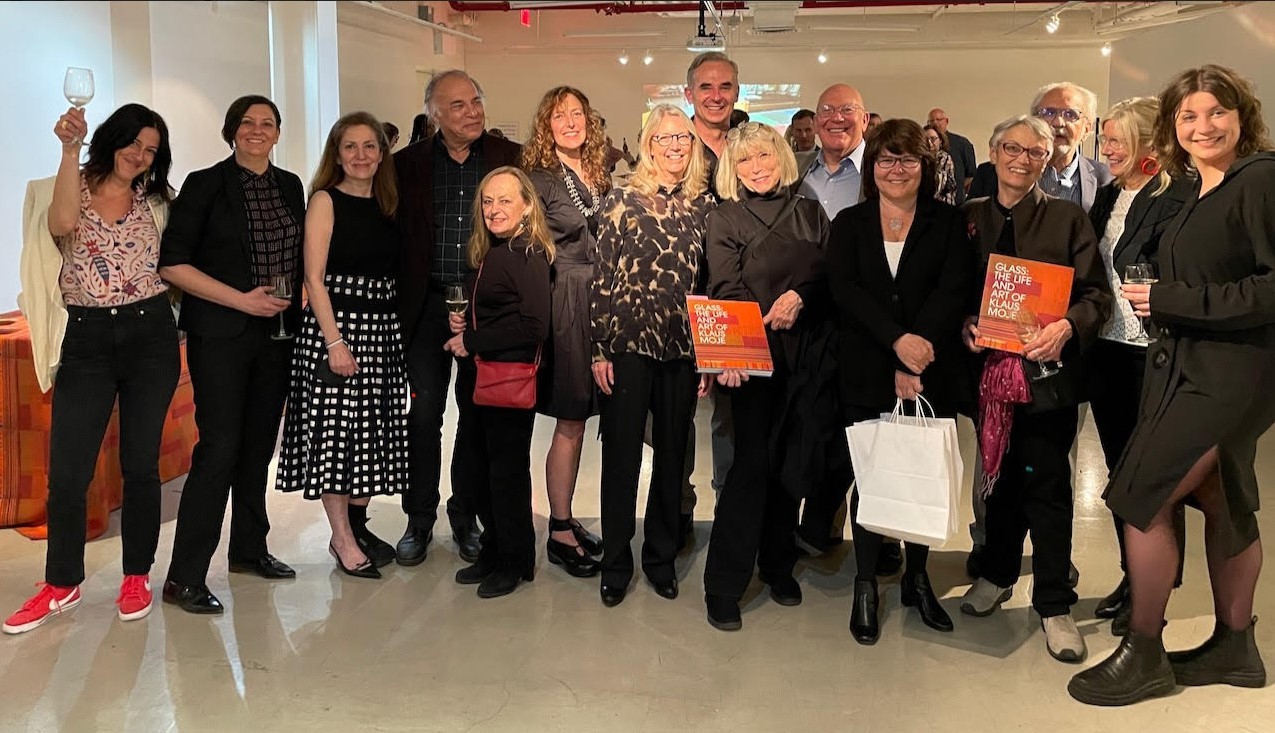 On Wednesday, May 4, 2022, not yet six years after his September 2016 passing, Klaus Moje and his singular achievements in kilnformed glass were celebrated in the launch party of a stunning new monograph with vivid photographs expertly reproducing the bold chromatic patterning of his most-important works. The artist's continent-spanning life and career are the subjects of the recently published Glass: The Life and Art of Klaus Moje (NewSouth Press, 2022) by Moje's hand-picked author, Nola Anderson, who flew from Australia to take part in the gathering in Brooklyn, New York.

Author Anderson first met Klaus Moje in 1982 when he came to set up the glass workshop at the then Canberra School of Art (now the Australian National University School of Art and Design), which had been modeled after the Bauhaus style of masters and students working side-by-side. By then, Moje had been working in glass for two decades, and had established an international reputation for his unique kilnforming work. With his training in Germany, his work in the European context, and his growing links with the United States, he brought with him a very broad view of what it meant to be an artist working in glass. His teaching style was also remarkable, encouraged by the School’s director Udo Sellbach and his interest in a “Bauhaus” model in which students worked alongside masters. Moje was known for generously sharing knowledge and opportunities to develop skills.

The process of writing the book, Anderson told the Glass Quarterly Hot Sheet, began with multiple conversations over the years not only about the artist's biography and career, but also about how to write about glass. A trained art historian, Anderson was looking to develop a new language to discuss glass art in general and Moje's work in particular, one that went beyond the linear narrative and technical focus. "I was interested in exploring how biographical, social and art historical influences influenced an artist’s work and what such a discussion might offer in developing a critical language," Anderson said.

As a veteran author of exhibition catalog essays and reviews, the project appealed to Anderson for the opportunity to delve into a single artist's life and work in a book format, and accepted the opportunity to devote the time and space required. She acknowledged it was a project she agreed to do because "the artist’s work offered material that was rich enough to support this," she explained, adding "There had to be a depth of ideas, a vision and an international context; Klaus’s life and work offered all these."

Anderson considered Moje's work within the larger scope of art history rather than limiting her discussion to other glass artists because she recognized how important Twentieth-Century Abstraction was to his development. "This was not a matter of direct stylistic influence though, more one of approach and permissions," Anderson said, citing the "Documenta" exhibitions Moje attended as a young artist, or modern art he was seeing in European galleries. "He was finding artists whose artistic philosophy resonated with his own thoughts. Klee and Kandinsky were kindred spirits. Here was an abstract language which Klaus understood as expressing emotional experience."

The life of the artist was quite interesting to Moje, as well, and an opportunity to work with the multi-talented writer, artist, stage designer, and gallerist Lothar Schreyer fascinated Moje as an example of an approach to life. "Klaus was also passionate about literature and theatre, from Homer, to Shakespeare and on to contemporary writers," Anderson adds. "Protest music of the 1970s and '80s spoke to his sense of justice. All this created a rich source of inspiration for his work which refused any simplistic notion of style and influence."

Asked about her goals for the book, Anderson said she hopes it advances the development of "a nuanced and evidence-based language to talk about glass, or about any art medium. There are many voices
contributing to this endeavour now, as writers delve deeply into what constitutes art history and artists explore a ideas way beyond traditional divisions of concepts and materials. It’s really just the beginning of figuring out the way ahead."

To learn more, read an excerpt from Anderson's new book in the Summer 2022 edition (#167) of Glass: The UrbanGlass Art Quarterly.

To obtain a copy of this notable book, purchase an author-signed edition of Glass: The Life and Art of Klaus Moje.