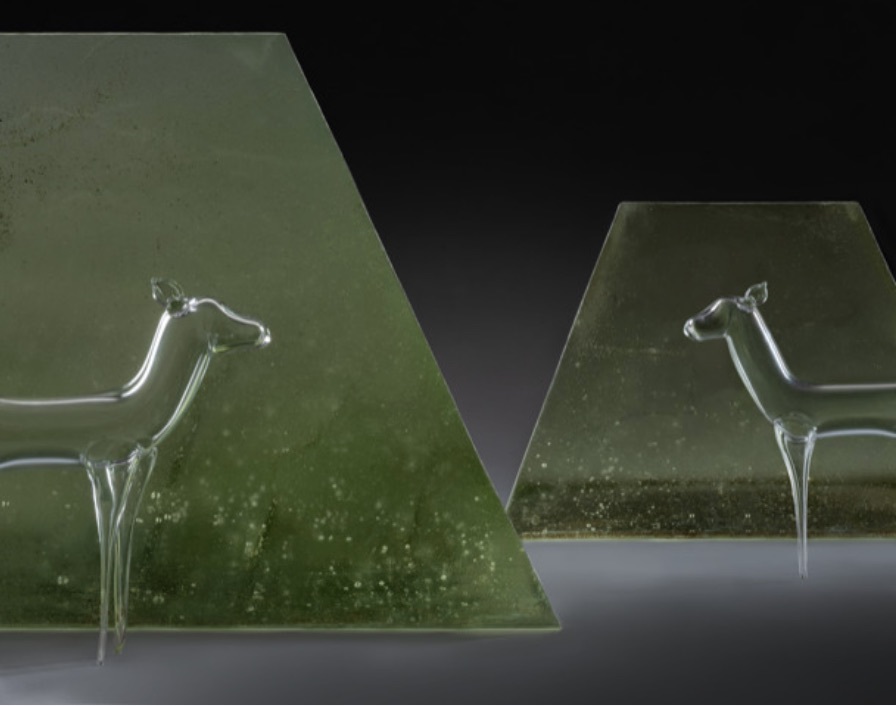 On December 5th, The Art Newspaper published an online article reflecting on the prominence of glass at the 2019 Miami art fairs with the headline "Design Miami is a Real Glass Act." In it writer Caroline Roux states that Design Miami "visitors will find the material being used as a medium of expression by an increasing number of artists." While Berengo and his Murano atelier are also cited in the article, it is Robert Wilson's recent project fabricated at The Corning Museum of Glass' amphitheater hotshop that gets top billing as well as the article's opening photo. The image features his installation of transparent glass deer that turned heads at the design fair when it opened on December 3rd. (It runs through the 8th.)

The Glass Quarterly Hot Sheet caught up with Corning's senior manager of hot glass programs Eric Meek, the morning he returned from Miami abuzz with the thrill of seeing the work he and his hot-shop team helped to create over nine-months so well received at such a prominent venue. "We wanted to be there because we saw getting glass in the hands of exciting designers as an exciting prospect," he explained. "We believe it's something that could yield very interesting new work."

Meek was involved with the Corning GlassLab initiative that, just over a decade ago, sought to bring the excitement of hot glass to  top designers used to working with prototypes and computers. The GlassLab mobile hotshop brought an actual portable studio to Design Miami and other venues to demystify the glass process and put it in the hands of the design community. Through these efforts, Corning made contact with New York gallerist Cristina Grajales, who connected director Robert Wilson with the museum's hotshop program to realize a dramatic installation that referenced the artist's boyhood ambivalence about deer hunting with his father in Texas.

The GlassLab mobile initiative was put on hold when Corning built its amphitheater hotshop and new Contemporary Art + Design wing, but the construction project included expanding the new capabilities of the Corning facility to fabricate glass projects at an expanded scale with the designer-outreach in mind. "We wanted the amphitheater to be a space where we can take ideas generated off site, bring them here to realize them, and then take them to where the artist or designer would be happy exhibiting them."

In recent years, Meek and his team have been inviting back designers they'd connected with through the first GlassLab project and bringing them to work in the state-of-the-art amphitheater hotshop. Two of their recent projects, with Wilson, but also Jeff Zimmerman's collaborations with James Mongrain, which were also prominently featured at Design Miami exhibitor displays.

The prominence of glass was not only noted by the art press, but by other gallerists. "Four other galleries came to me to ask how they could get their artists to come and work with us," said Meek.  I find it very exciting to work with people outside the glass world who push us to take the material to new places."

Walking the Miami shows (which include Art Basel Miami Beach and Art Miami as well as Design Miami), Meek noted the continuing expansion of glass into all areas of the fair and a varied range of artworks. "Glass has arrived as a sculptural and artistic media," he said, citing Olafur Eliasson and Fred Wilson's large-scale glass works among others. He sees the distinctions between the glass being shown at Design Miami and the neighboring fine-art fairs as becoming harder and harder to distinguish, but with no question that glass is becoming omnipresent, fueled by new approaches and sensibilities that don't come from the Studio Glass world but the larger art community.

"Ten years ago, glass wasn't there," Meek said. "The artists and designers who approach us now are more informed and they come to us with ideas a little more in tune with the material."