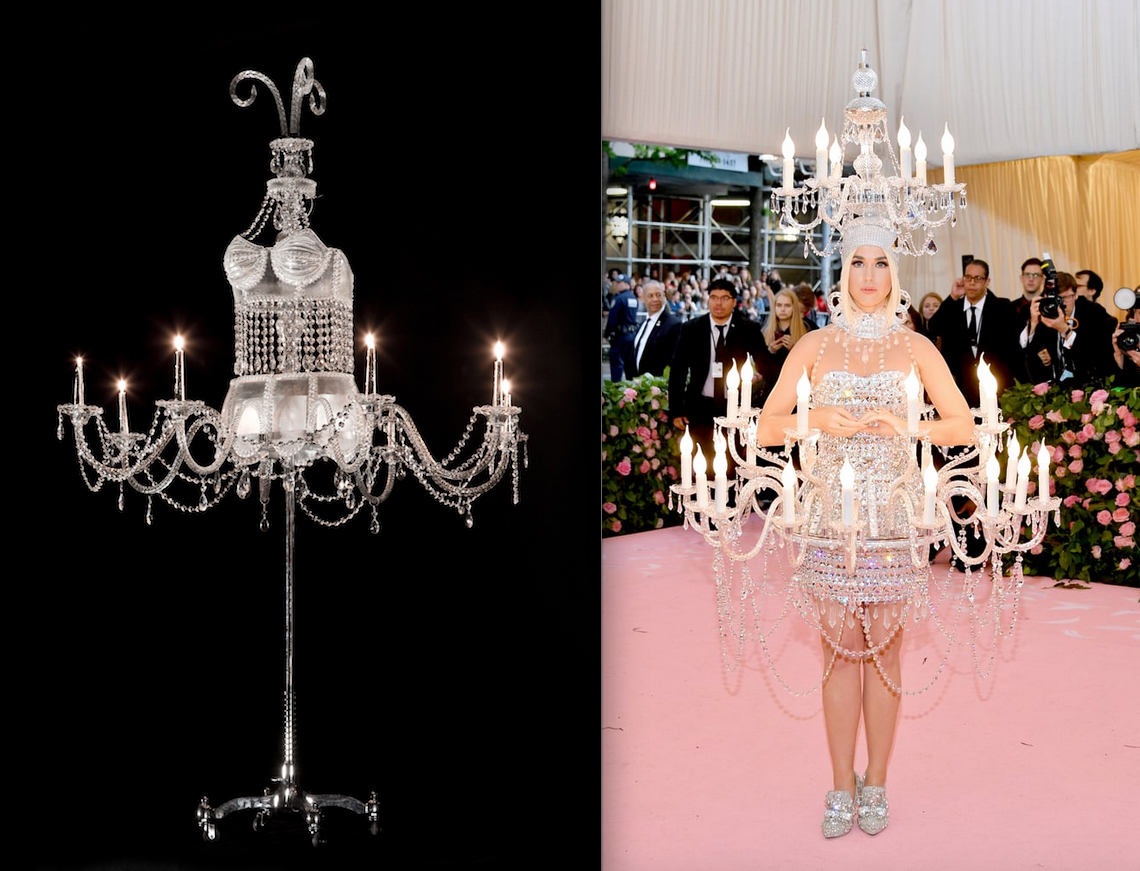 The theme of last night's 2019 Met Costume Institute Gala was tied to its current exhibition on "camp," so the celebrity red carpet this year featured even more outrageous outfits than the usual star-studded fashion show. Pop singer Katy Perry, a self-professed fan of camp who has dressed up as a hamburger in the past, knew this was a special opportunity to pull out all the stops. In a New York Post interview leading up to the big event on Monday evening, Perry's longtime fashion guru Moschino creative director Jeremy Scott said "there probably isn’t a performer in pop history that’s used camp and humor more than she has. I have guesses at what people expect from us, but I’m trying to outdo those expectations. It’s going to be an eleganza extravaganza.“

Viewing pictures of Perry's glittering chandelier dress, complete with lit LEDs, one couldn't help notice the parallels to the decade-long series by Susan Taylor Glasgow, who did her first chandelier dress in 2009. Nobody knows whether the dresses, which were on view at New York City's Heller Gallery in 2013 and 2014, may have caught the designer's eye, or perhaps the parallels between the classic chandelier and a woman's figure are simply a natural connection. An email inquiry to Moschino's press department wasn't immediately returned.

The Glass Quarterly Hot Sheet was, however, able to reach Taylor Glasgow, who had plenty to say on the subject.

"The chandelier is such a sensuous, feminine form, it's hard to ignore it as an inspiration if you're also interested in fashion and design," said Taylor Glasgow in an email exchange with the Hot Sheet. "Before becoming a glass sculptor I was a dressmaker and owned a shop called 'On Pins & Needles.' It was not a far journey from point A to Point B. Whether in fabric or glass, my design focus is always form, proportion, and purpose."

Taylor Glasgow credits Laura Donefer's glass fashion show for helping to push her to develop a wearable chandelier dress, which was modeled by the Pittsburgh Glass Center's Heather McElwee during the Corning conference ten years ago.

Taylor Glasgow continues: "In 2009 I created my first wearable Chandelier Dress for Laura Donefer's Glass Fashion Show at the Corning GAS conference. When designing a glass garment intended to be worn by a model, the engineering considerations are very different than with stationary sculptures. Glass is heavy and fragile, people move and breathe, so of course the safety of the model is of utmost importance. You'd think it would be harder to find a model to strut around in a thin layer of glass in front of an audience. For some reason it's not though, and the Met Gala proves my point, with Katy Perry carefully navigating an elaborate chandelier dress designed by Jeremy Scott for Moschino. It's over-the-top proportions certainly followed this years Met Gala's theme of "camp".  (I was happy to see she had safety escorts!)"

Watch a video of Katy Perry camping it up at the Met Gala below: