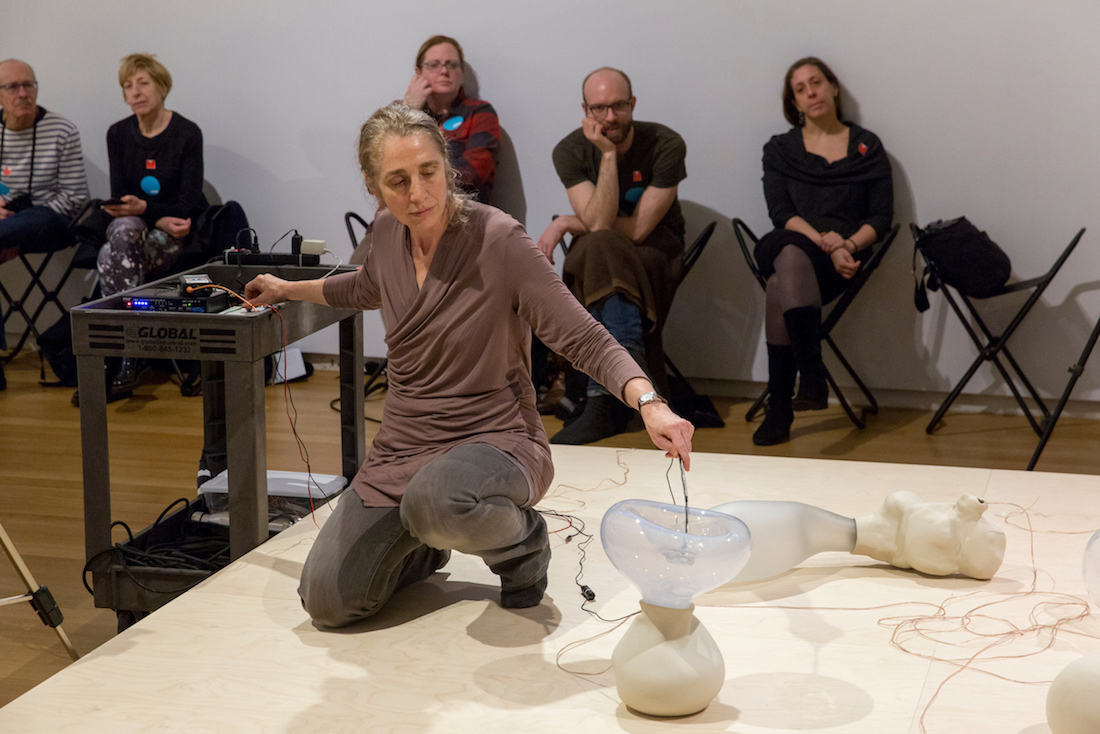 Stepping into a curtained section of the fifth-floor gallery of New York City's Museum of Arts and Design (MAD) on Sunday February 11th, I picked up a perceptible hum in the room. It wasn't the hum of the crowd (which, initially, was absent) or the muffled hum of the city outside. Instead, it seemed to emit from the glass and ceramic vessels arranged on three large flat tables in the gallery. The vessels appeared to be frozen in various stages of flow, or, perhaps more accurately, transformation, like bulbous glass snakes shedding their skin or larvae playfully moving in and out of their delicate cocoons. The works were from Julianne Swartz’s Sine Body series of glass and ceramic vessels that each produce a particular sound generated through an electronic feedback mechanism. The live performance was just one part of the Sine Body installation, itself a part of a larger exhibition at MAD titled "Sonic Arcade: Shaping Space with Sound" (on view through February 25 2018), which consists of multiple installations and interactive environments that explore how sound shapes spatial and interpersonal relations.

For the performance of Sine Body, Swartz slowly made her way around the room, climbing atop the tables to sit beside a given vessel into which she inserted a microphone that picked up the tonality within the encapsulated air mass. This air mass, through electronic feedback, is then amplified into a pure tone or sound. “I use analog electronics technology to amplify and filter,” Swartz explained in an email interview with the Glass Hot Sheet. “those processes physically reduce or increase what is already there, in order to reveal it, but they are not generating anything.” Sitting next to the vessels, the artist resembled a sort of conjurer--or, perhaps, a scientist or a doctor, as one audience member pointed out--at times playing with the air mass around the vessel to adjust the tone. In this way, the vessels functioned as instruments activated not only by the electronic feedback mechanism, but also, on this night, by the voice of award-winning soprano Estelí Gomez who harmonized with the tone produced by each vessel, and then, following the tone's vibrations and idiosyncrasies, produced a sort of musical composition. The performance was punctuated; moments rich in sound were separated by moments of silence in which Swartz would unhook the microphone from one vessel and move on to the next. “It takes a bit of time to set up each vessel to find its sound and I wanted to be transparent with that,” Swartz emailed, “And the space between each sounding is useful. The surrounding silences allows one to listen with more attention when there is sound.”

The overlay of the sounds of the vessel and Estelí Gomez’s voice seemed to rip open a space in time. For a few moments, I was no longer in a museum at the center of a bustling New York City. At times, I traveled to distant places connected to my heritage (visions that, I think, were evoked when Gomez's voice resonated with particular sounds and music that I carry as part of my self). Other times, the guttural sound of her voice brought me deeper into myself, to the inner landscapes too easily ignored in the hustle of daily life. I'm sure I was not alone in such impressions. Along the walls several audience members sat with closed eyes as if in meditation, appropriate given that this piece was inspired by Buddhist singing bowls.

What were others seeing and feeling? I wondered if they were seeking transcendence, taking this moment as a means to escape from a world in which too many noises seem to compete for attention. Cassandra Coblentz, in the exhibition catalogue for Swartz’s 2012 installation How Deep Is Your, points out, “Swartz's conception of the body is rooted in her interest in Eastern metaphysics through yoga and meditation.” In such practices, achieving a particular mental state is rooted in the body. The sound of the singing bowl or the sound of 'Om' when chanted, for example, vibrate through the body, encouraging inner harmony and concentration. At times, Estelí Gomez's voice sounded like a glass vessel or singing bowl struck with a mallet, blurring the lines between her body and the vessel with which she was in harmony at a given moment.

This blurring is intentional and the sound that initiates it is the result of a deliberate creative process. Making Sine Body was an of “focused concentration,” Swartz wrote. “It was a process of listening to the material to gauge how far I could push it,” she explained. “Most of my research was the physical testing of different materials with an oscillator in my studio.“ Materials and their functionality are important to Swartz’s work, and the materials that comprise Sine Body were carefully chosen: “Glass has a smooth, reflective surface that translates to clarity in sound. Glass surface and density reflects and holds sound waves (rather than absorb and disperse),” she reflected. Similarly, “Porcelain made sense as a mate to the glass because it is a very refined, non-porous clay body that vitrifies densely, so it also has clarity and resonance with sound. I wanted the distinct sonic qualities of the two materials.” The two materials were united, in Swartz's words, by “wrapping the fired ceramic pieces in wet newspaper and using them as press molds to form cavities in the hot glass bubbles.”

In this installation, sound was not simply a byproduct of the union of glass and porcelain. It was considered throughout the creative process and is itself a medium around which the vessels were shaped. “Sound can be directed, molded, and conducted,” Swartz expressed in a pamphlet created for Sine Body by MAD. Reflecting on the analog technology used to amplify the sound of each vessel, she said in our correspondence, “I think that it is perceptible that the tone is not generated by ones and zeros, but by air swirling through a material body. This is important to me conceptually, but I also think it is what gives the tones a quality that is in relationship to our bodies.”

Recently, artists, scholars, and activists alike seem to be calling us to recognize the muddy boundaries between ourselves and basically everything around us: others, the environment, the physical objects with which we come in contact on a daily basis. Recognizing this muddiness is thought to be able to heal divides and help us become more aware of and, perhaps, resolve pressing issues in the world today. But this is not easy, especially when we seem more and more detached, absorbed, for example, in the screens of our phones. A statement made by Swartz in the MAD pamphlet sums up a possible consequence of this: “Perhaps people are craving somatic experience in an increasingly digital world.”

When I asked Swartz what she hopes viewers take away from Sine Body, she gave me this list: “The physicality of sound, a felt experience of resonance, a dialog between the material and the intangible, body as vessel.” Each individual who views this piece and who sat in the audience to witness and participate in its activation likely had a different experience and saw different images behind the lids of closed eyes. But, beneath each individual experience was same resonant sound. This is not dissimilar to how each vessel in Sine Body is unique in shape and tone, but is, ultimately, one part of a single body. Sine Body uses sound to tap into each audience member’s unique body and experiences, to satisfy that possible craving for somatic experience. By doing so using analog technology, it unites its viewers by breaking down the boundaries and binaries of the digital and creating that felt experience of resonance. In this, perhaps, there is potential for transformation. Are not self-awareness and close-listening qualities that help us to emerge from our own cocoons and attend to the world around us, to seek others with whom we can unite in the shared experience of being in the world?