Tom Fruin’s plexiglass and steel water tower can be seen from the Manhattan and Brooklyn Bridges, DUMBO, and Lower Manhattan. photo: Robert Banat

A Brooklyn-based artist is using glass to pay tribute to an oft-overlooked architectural icon in New York City: the water tower. Commuters crossing the Manhattan Bridge can see Watertower, a kaleidoscope of salvaged plexiglass and steel sitting on the rooftop of 20 Jay Street, where artist Tom Fruin has worked for the last 15 years. 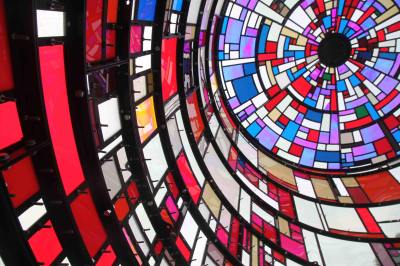 A view from the inside of Watertower. photo: Robert Barat

“Watertowers are always on the top of buildings and generally have the best view (and are pretty easy to view themselves),” Fruin told the Hot Sheet in an e-mail. “When surveying the rooftops, the towers are always present but never celebrated as part of the skyline. There is something very humbling about these towers. I wanted to draw attention to and celebrate them as an omnipresent component of our city and our lives.”

To create the piece, Fruin tracked down approximately one thousand pieces of plexiglass from all over New York City. In addition to the pieces he found on the street, he used colored pieces in reds, blues, and purples that sign shops in Chinatown saved for him. Most of the clear and polychrome pieces in Watertower came from the late Dennis Oppenheim‘s closing DUMBO studio. With an oven courtesy of a small grant from Build It Green!NYC, he slumped the glass, finishing the project with the help of two others over the course of three months. The finished piece is 20 feet high and 10 feet in diameter, and although it doesn’t store water, the sculpture includes both interior and exterior access ladders and has a working roof hatch. Watertower can be seen from around DUMBO, the Brooklyn and Manhattan Bridges, FDR Drive, and Lower Manhattan, but Fruin says the best places to view the piece are Brooklyn Bridge Park at Washington Street and on the Manhattan Bridge bike path. At night, Ardunio-controlled light sequences designed by Ryan Holsopple keep Fruin’s ode to the water tower illuminated.

Also on view in Brooklyn is HOTEL, Fruin’s 50-foot neon installation on the Wythe Hotel in Williamsburg. “It’s a humble and handmade contemporary reference to the history of signage in New York,” Fruin said. He created the letters using red neon, scavenged metal, and old signage, all sourced from New York City in the past decade.

Watertower is the latest work in Fruin’s Icon series in which the artist honors architectural icons out of found plexiglass and steel. Earlier Icons include Kolonihavehus (2010), a Danish-style cottage, and Obelisco (2011), which was on view in Buenos Aires.

“I do hope to make more Icons,” Fruin said. “Ideally, two more towers for New York and a billboard piece for Los Angeles.”