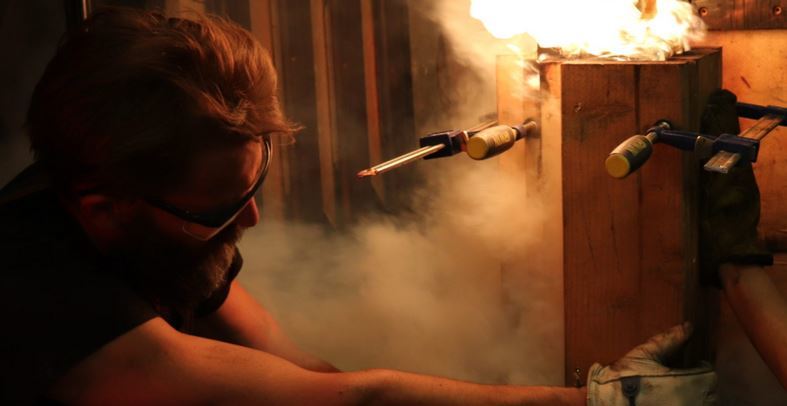 As concern mounts about the spread of Covid-19, commonly referred to as the coronavirus, glass studios in the U.S. are being proactive and hope to help stop the spread as the disease is just beginning to be detected. While the number of confirmed cases remain far lower than in global hot spots in China, Iran, and Italy, the lack of available testing in the U.S. has many worried that the spread of the virus has not been adequately tracked. With the Seattle and New York City regions emerging as locations where dozens of cases have been confirmed, glass studios there are taking steps to do their part in limiting the spread. In addition to UrbanGlass in New York, The Glass Quarterly Hot Sheet reached out to the glass studios at Corning (Corning, New York), Espace VERRE (Montreal), Pittsburgh Glass Center (Pittsburgh), Pilchuck (Stanwood and Seattle, Washington), and Public Glass (San Francisco, California) to ask about what steps were being taken in the face of a potential outbreak of Covid-19, and whether they were still planning to attend the Glass Art Society conference in Sweden in May.

At the studios of UrbanGlass (the Brooklyn non-profit art center that publishes Glass Quarterly), new policies and practices have been put in place to minimize the possibility of transmission of the virus between renters, students, artists in residence, and staff. Everyone entering the studio is asked to wash or sterilize their hands, and urged to use alcohol disinfectant wipes to disinfect blowpipes, tool handles, and any other shared equipment. All high-touch surfaces such as door knobs, light switches, equipment handles, and elevator buttons are wiped down with alcohol several times a day. And employees, students, and renters are urged to stay home if feeling sick. In fact, studio policy has been liberalized so the fees for a last-minute cancellations of rental time have been waived. Employees, part- or full-time, are encouraged not to come to work if they don't feel well, and operations director Brian Kibler has compiled a lengthy list of substitutes who are capable of filling in for absent techs if necessary. "We are closely following the recommendations of local and federal health officials, including the New York State Department of Health and the Centers for Disease Control (CDC)," UrbanGlass executive director Devin Mathis wrote in a recent studio bulletin.

At Pilchuck, which has offices in Seattle, a recent opening at the Pioneer Square gallery was surprisingly well-attended despite the growing anxiety as the metro area's Kirkland suburb has seen a large cluster of cases of the virus. "Everyone was careful and not shaking hands," says Pilchuck deputy director Donna Davies about the first Thursday event, "but there was great support for the city, neighborhood and Reilly Donovan's show."

Pilchuck's main campus in Stanwood is not yet in session, but Davies told the Hot Sheet that they "will make sure all handrails, door handles, and table/common surfaces will be wiped multiple times throughout the day to minimize any possible risk of exposure." Like at UrbanGlass, alcohol-based hand sanitizer will be deployed throughout the campus, and wipes will be available in all buildings to wipe down tools and everything.

As for the upcoming GAS Conference, Davies says that Pilchuck education director Ben Wright will represent Pilchuck at the event in Sweden, and they are closely monitoring the situation on a daily basis "to see what next steps should be taken."

Studios in other parts of the U.S. that have not seen as many cases are following similar protocol. Pennsylvania, for example, has only had four confirmed cases in the large Mid-Atlantic state, but Pittsburgh Glass Center's executive director Heather McElwee says they have been following the recommendations from the Center for Disease Control about Covid-19 as well as tracking notifications on the Allegheny County Health Department's website.

"We are actively encouraging sick employees to stay home," McElwee says. "We have also waived our cancellation fees for any student who thinks they might be sick and needs to miss a class or workshop. We have placed posters around the building about cough and sneeze etiquette, hand hygiene, and sanitizing methods."

Pittsburgh has always sanitized blowpipes after every use, and also offers disposable cardboard tubes to cover the mouthpiece, as well as disposable mouthpieces for blow hoses. At this time they do not anticipate any schedule changes or closures, but are monitoring the situation closely.

At this time, McElwee is planning to attend the GAS conference in Sweden along with members of the Pittsburgh Glass Center staff.

The Bay Area of California is seeing an increasing number of confirmed cases, and the protocols at Public Glass in San Francisco reveal an elevated level of focus. Public Glass operations director Brynn Hurlstone told the Hot Sheet that they are keeping a close eye on the news, as well as official CDC instructions for the Bay Area. In addition to ramping up to "a more rigorous, or aggressive, cleaning policy with blow pipes and hand tools," Hurlstone said that teachers have been asked to keep an eye out for anyone who may be getting sick.

"We’ve instructed all of our teachers to keep an eye on their students and pull students aside if they are showing signs of respiratory illness," she explained. "We ask people to reschedule if they are ill, and are also making sure our instructors are monitoring their own health."

Aside from a rescheduling a few corporate team-building events and a few group classes, there haven't been too many changes. A master class is proceeding this weekend as planned. And at this time, the staff of Public Glass are planning to attend the GAS conference in Sweden.

The general director of Espace VERRE in Montreal Christian Poulin echoes many of the same steps other organizations are taking from cleaning to encouraging employees who are sick to stay home. They are watching news and information from Quebec's Public Health Agency closely, but at this time are still planning to have representatives attend both the May GAS conference as well as the Glass Art Association of Canada's upcoming conference in Whitehorse, Yukon from June 11 – 13th.

At the Studio at The Corning Museum of Glass, director Amy Schwartz says that a sizeable proportion of museum and studio visitors are tourists from China, and there has been a noticeable reduction in their numbers since the first of the year. However, this is also a slower time of year, so there hasn't been a notable drop in overall visitors.

For now, the cleaning regimen at the studio is as rigorous as it has always been, with alcohol wipes available in the studios and the workshops for the public. The Studio at Corning has been offering the public disposable cardboard blowpipe covers for artists who choose to use them in their main studio, as well as for the public at the Studio's Make Your Own Glass sessions, which they initiated during the SARS outbreak in 2002 and 2003, and they continue to use them. These are sourced from the Jonesville Paper Tube Corporation in Jonesville, Mississippi, and are waxed and sized for the outside diameter of the mouthpiece of a blowpipe (.625 inches in diameter by 1 1/2 inches long). At less than $20 for 1,000 pieces, they have been an easy way to provide the public with an extra layer of protection when participating in the blown workshops.

Schwartz says that there haven't been any new visitor requirements put into place, as there had been during SARS, but she is closely watching the situation and following protocols of Corning, Inc., as well as any new developments from the museum side. The artist-residency program, which includes artists from around the world, has been proceeding without any changes or cancellations, but she is watching the situation develop. "We're monitoring things, and are certainly concerned about everyone and everything," she said.

While Schwartz hadn't planned on attending GAS in May, she has already had to change her plans to attend the opening of the "Venice and American Studio Glass" exhibition at the Stanze del Vetro with her husband and featured artist, Bill Gudenrath, when its opening was postponed until April.

"At the moment, I’m still traveling domestically, and I have some trips coming up," Schwartz says, "but I'm definitely evaluating my plans carefully based on the latest developments and information."