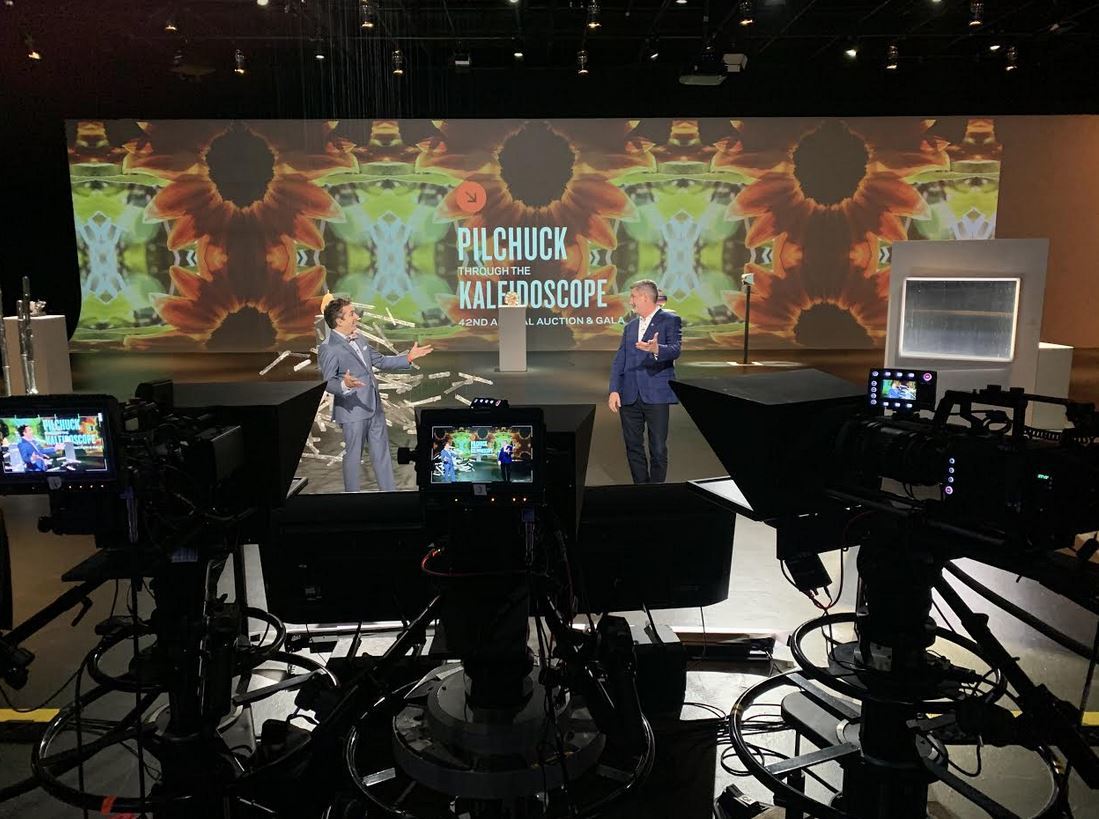 Behind the scenes of the 2020 Live Auction broadcast of Pilchuck: Through the Kaleidoscope. Auctioneer Fred
Northup, Jr. and executive director Christopher R. Taylor. © pilchuck glass school

As the pandemic stretches on, much of the economic news from the glass-art world is more about survival than success. But the impressive auction results from Pilchuck's first-ever virtual annual gala, themed "Through the Kaleidoscope" and held online on October 17th, were something to celebrate. The results were all the more notable because zthe staff of Pilchuck, which in June canceled its 2020 in-person programming, braced themselves for sharply lower gala income for 2020 compared to the pre-pandemic 2019 gala's $1.2 million. And instead of the usual 150 to 200 auction items, they pared this year's offerings down to 96,

Yet even with lowered expectations, deputy director Donna Davies and her colleagues challenged themselves to put on the most effective event possible. Researching every online gala, auction, and fundraising event they could experience in preparation for their own, they discovered a few key elements led to successful results.

"The takeaway was you’ve only got 60 minutes of captive attention for the viewer," explained Davies in a telephone conversation with the Glass Quarterly Hot Sheet. "Watching with my team, after the event concluded, we asked ourselves, did you feel more connected to that organization or did you come away from it wondering whether you just wasted 60 minutes of your life?"

"We never had more than 25 people in the venue at one time, and there were directional signs in terms of where visitors could work," said Davies. "We were able to keep people safely distance without much problem because of the more-than-5,000 square feet of the venue we were in."

Holding the event in a former television studio had many advantages, including lighting the exhibition of auction items, and providing high production values for the online auction itself, which was hosted as before by auctioneer Fred Northup, Jr. Throughout the event itself, there was a steady and tightly-scripted flow that never lagged. Pre-recorded segments, from collaborating artists sharing a split screen to talk about what Pilchuck meant to them, to teams of personnel hamming it up in a short segment, the event stressed the sense of community and the special place that Pilchuck represents to many in the glass field.

The event also featured little of the "dead air" or technical glitches that are so often features of Zoom events. The Pilchuck team were determined to avoid both, and a toll-free technical support number was prominently displayed at the bottom of the screen for the duration of the online event to help potential bidders square away any technical issues that might prevent him or her from bidding.

"It was road testing, and, being at a former television studio, they [Freemont] had the capabilities we needed," explained Davies. "We really drilled into what are the key contingencies were, and we needed to know what the backup plans were for every situation. For example, we’re in the pacific northwest, and there's a 50/50 chance we’re going to have a beautiful day or a torrential downpour. We got it down to a very granular level of detail with the studio. What to do if there's a power outage, if our internet connection goes down, another problem -- we planned what are our options for each scenario."

"We’re completely grateful, overjoyed," said Davies. "We went into this hoping to hit our adjusted goals. To come away with these kind of numbers is really just amazing, and we are so grateful."

"The takeaway for us is that we're in a tight-knit community," added Davies. "At the end of the day, our success fosters more success. We noticed that early on when the virtual world was beginning, if someone had a successful event, people wanted to share what worked for them, and we are doing the same."

If you missed it, you can see an archived version of the Pilchuck live auction event here.