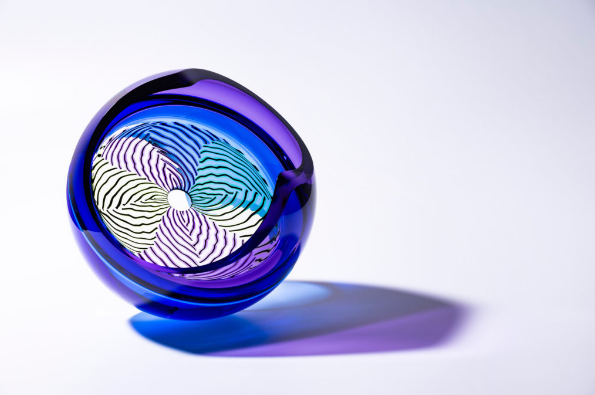 Boldly experimental and technically rigorous are terms that can be applied to the collaborations between John Kiley and Dante Marioni, which are going on view this evening at Traver Gallery. Lino disciples and arguably two of the top American glassblowing masters who have known one another for almost two decades, they first connected in 1991 when Marioni stopped in at the restaurant where Kiley worked wearing a Pilchuk Glass School t-shirt after Kiley had just registered to take a class there.

"He invited me to visit him the next day at Benajamin Moore’s studio, but I blew it off and didn’t go," Kiley said in an email exchange with the Glass Quarterly Hot Sheet. "After Pilchuck, I looked him up in the old-school phone book and called him up… That’s how we met. He was nice enough to extend another invitation to watch him work this time at his own studio. Later on, I was a regular assistant, along with Janusz Posniak, who I also assisted on his work."

Kiley is known for his wide-ranging efforts to move beyond symmetrical forms, cutting them away to reveal hidden contours, purposely interrupting the careful balance of the original blown forms. Taking disruption a step further, he's also explored what he calls fractographs -- made by shattering blocks of crystal and painstakingly reassembling them. Marioni is known for pushing the envelope of scale in expanding the classical shapes of urns and vases beyond technical limitations, and adding modern reinterpretation. Lately, Marioni has been exploring traditional cane techniques, creating massive patterned leaves where scale is defied by the delicate decorations that adorn them.

The longtime collaborators join forces once again in the exhibit "Incalmo," opening at Seattle's Traver Gallery this evening and running through November 2, 2019.

Their 2019 partnership brings together their individual explorations into a new body of work that merges the balanced spheres and shadow-play of Kiley's work with the bright colors and alluring patterns of Marioni's.

"The finished pieces are a collaboration, in the sense that we designed and made the work together, but truly, it is taking what we each do as individual artists, joining it together, and then letting that be what it is," Kiley said. "There is a lot of dialogue about which patterns to use, color palette, and then how they are cold worked and finished. I think we both have a similar 'eye' so it’s not to difficult, although we don’t always agree…"

Also opening at Traver this month is April Surgent, known for her gray-scale wilderness landscapes. To make these landscapes, she uses a technique called cameo engraving, which involves carving into a surface and exposing a different color underneath, using texture and contrasting depths to mediate the translucence of the glass.

Her exhibition "In the Space Separating" was inspired by a recent trip to Cook Inlet, Alaska, where she worked with marine ecologist John Piatt as a research assistant.

As she told the Australian art Website ZoneOne Arts in an interview: "Lower Cook Inlet is a remote and wild place with glacier topped mountains that surge from the ocean. The surrounding environment skews one's everyday perspective and gives you a palpable sense of being on a planet."

The unique talent of these three artists -- and varying ways they use color, form, shape, and method -- creates a diverse range of expressions in glass at Traver this month.