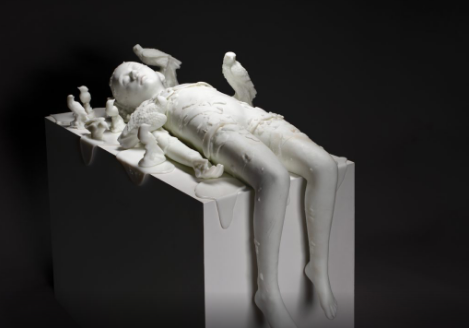 The work of artists Sibylle Peretti and Stephen Paul Day share a somber beauty and haunting quality, often based on folklore and childhood memories. Featuring over 25 works from the past decade of their careers and several new pieces, the couple's aptly named joint exhibition "Connections" will go on view October 20, 2019, at the Huntsville Museum of Art.

Peretti and Day began collaborating in 1992 and have continued to influence each other and work together ever since. They divide their time between New Orleans, Louisiana, and Cologne, Germany. Though their work shares common concerns, each works distinctly as individual artists.

Prominent elements in exhibit are two near life-sized children, one by each artist. Peretti's was made by painting over cast glass, and is entitled Snow Child III, while Day's, made of bronze and steel, is entitled Dreamer. Both are sleeping as they are watched over by birds, drawing on common themes of the innocence and vulnerability unique to children, their special relationship with nature, and an ominous feeling of danger. Even further, Peretti's Snow Child III is based on a Russian fairy tale in which a couple creates a child out of snow who later comes to life. This mysterious fantasy work is a part of each of their work.

Inspired by a photograph she took at the bank of the Tchefuncte River outside of New Orleans, Tchefuncte explores the more natural relationship between children and the world around them.

“The coyote and the girl encourage us to join them on their journey into an unknown, undefined place of possibility, mystery and beauty,” the artist explained.

The piece was made using 48 individual glass panels and found objects. The impressions of rope at the bottom of the piece were created with rope found at the bank of the Tchefuncte River.

Day's pieces in the exhibit include more bronze work, paintings, and the painted objects he often finds at antique stores and repurposes. In these works, he continues with the theme of childhood innocence, often incorporating twin imagery that his work is known for. In the dual busts Two Boys Blind, Day added the blindfolds to the eyes and added words from James Joyce's The Portrait of the Artist as a Young Man at the bottom in red.

In addition to their work as individual artists, the exhibit contains two series the couple collaborated on: the "Glass Notes" and "Suicide Notes" series.

The "Glass Notes" series is incredibly unique as a concept, and in practice. All of the notes are written on paper napkins to start. The artists take a mold of the napkin and, after firing, embellish it and slump glass over the surface. This creates a juxtaposition between the impermanence of something like a napkin and the transparent permanence of glass, mixed in with beautiful messages of human emotion and impermanence.

"Connections" is an exhibit of two artists who contrast the innocence of childhood with the complexity of nature, and venture into dark and unsettling terrain in their wide-ranging works.