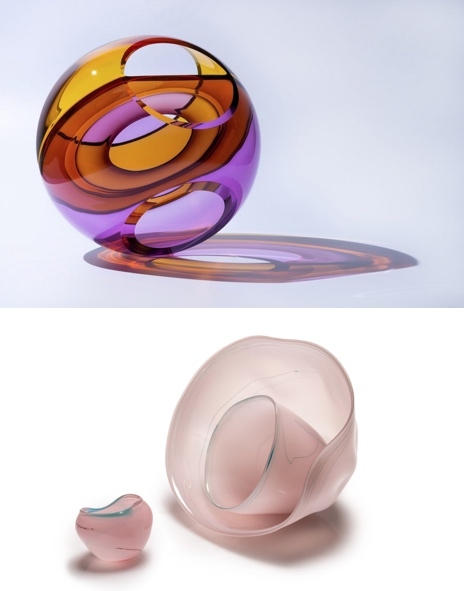 For the first time, John Kiley is exhibiting his work adjacent to his former employer Dale Chihuly at side-by-side exhibitions at Traver Gallery. The dual shows, entitled "Perspective" and "Chihuly", are opening this evening, October 6, 2022, in Seattle. This opportunity is a career high-water mark for Kiley, who worked for Chihuly from 1994 to 1998 before going on to work on Lino Tagliapietra's team and on his own projects. In a telephone conversation with the Glass Quarterly Hot Sheet, Kiley shared a memory of the time he was tapped to help Chihuly develop some design concepts for the chandelier series that would become the legendary "Chihuly Over Venice" installation in 2016, an unexpected honor for an up-and-coming glassblower. He remembers Chihuly leaving him to his own devices for a few hours in a studio that happened to have no glory hole, then returning to take a look at what he'd come up with on his own. He won't forget the sharp sting of rejection as the annealer was opened.

"He basically said it was crap," Kiley recalls frankly, adding that he only had four or five years of glass experience under his belt at that point.

But things got interesting when Chihuly directed Kiley to gather as much glass as he could on the pipe until it was a "big, out of control thing, which was completely out of my comfort zone." He  then commanded Kiley to jump up on the marver and blow, then let gravity take over, turning until Chihuly suddenly told him to stop.

"Of course, then it all starts to fall, and it ends up as this beautiful long tube thing with the crystal gathered at the end as it hits the floor," Kiley recalls. Chihuly said it was the best piece Kiley had made all night.

"It was a master class in what this material does," explains Kiley. "He was showing me here's what it does well, here's what it does on its own, here's how we're going to use that to make the chandeliers."  The experience was a turning point for Kiley, who says he learned more in that moment than he had up to that point, taking in what glass does and letting it do it rather than trying to impose what he thought he knew based on technique. It was about the power of letting go.

In preparation for the exhibition, Kiley decided to go back into the studio after years exploring his "Towers" and "Fractograph" series. He decided to work at a larger scale, hoping to measure up to the master of glass assemblage exhibiting beside him. Kiley's works for the exhibition are around two feet in diameter, and feature multiple layers and apertures to view and allow light to pass through creating complex color fields in and around them.

The Chihuly works in the exhibition are actually of a relatively human scale. Though expectations of glass-art scale were exploded with projects like "Chihuly Over Venice," the Traver exhibition seeks to show another side of the world-famous artist through his "Baskets," "Ikebana," and rare "Pilchuck stumps" series, with subtle gradations of color and repeated undulating glass forms that reflect and diffuse light, their nested forms adding to the complexity.

"When I worked for him, Dale used to come and blow from time to time, and he has this sensitivity to how the material works and moves, the contrast between thick and thin," says Kiley.