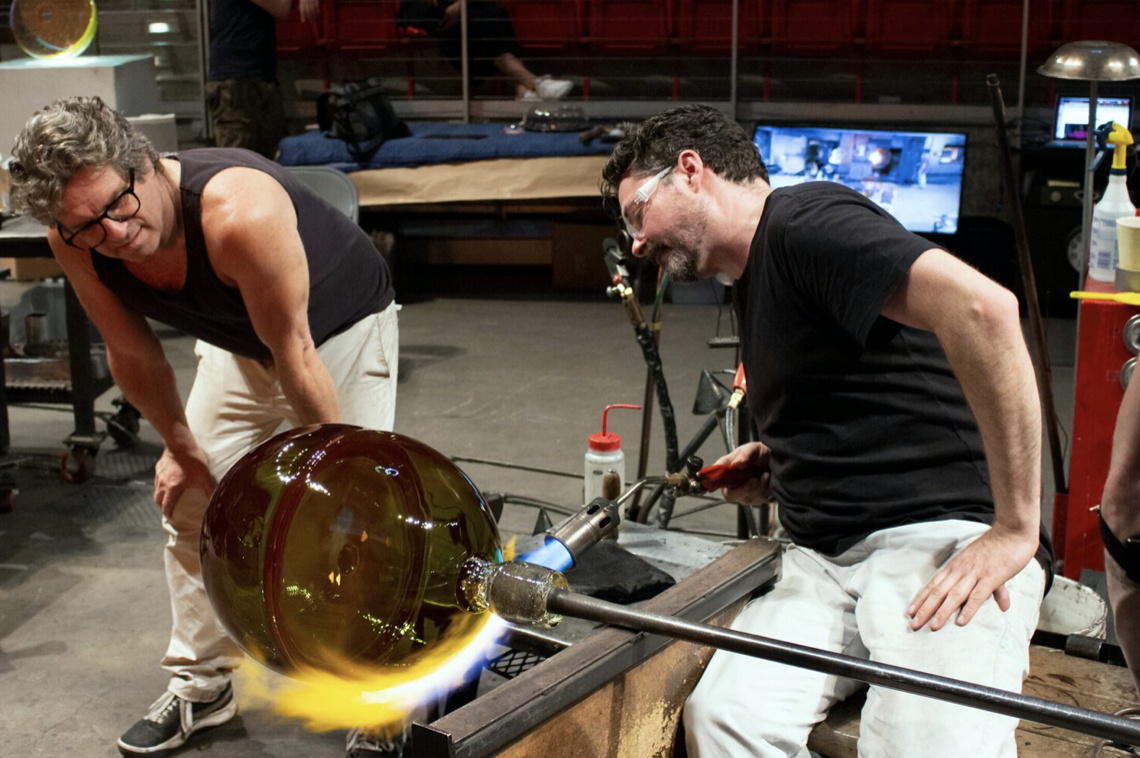 A chance meeting between a chef apprentice and a leading American glassblower became a unique creative partnership that's evolved over decades from apprentice to assistant to full artistic collaborator. Both John Kiley and Dante Marioni are among the most-skilled American practitioners of traditional Italian glassblowing and acolytes of legendary Italian maestro Lino Tagliapietra. But each is advancing his uniquely contemporary approach to the time-honored process — Kiley in cutting away and exploding form, Marioni in taking vessels to new levels of scale and complexity of surface patterning. An opportunity to join forces in an aesthetic adventure came when they won a week-long residency at the Museum of Glass in Tacoma, which went ahead even as the Covid-19 pandemic first took root in Washington state last March. They were the last residency to be completed before a state-wide shutdown that remains in effect.

The remarkable results of this collaboration is currently on view at Schantz Gallery Contemporary Glass in Stockbridge, Massachusetts where a by-appointment-only exhibition “Contemporaries: John Kiley and Dante Marioni” will remain on view through July 17th.

Their collaboration began when Kiley was a high-school student saving money to enroll in the course on lost-wax-casting technique while working as an apprentice chef at a local eatery. By coincidence, Marioni was at the restaurant, and their introduction secured Kiley’s fate and shared glass journey. Marioni, who had already made a name for himself for his rigorous dedication to Venetian glassblowing, recruited Kiley as his apprentice. From his humble beginnings as a studio assistant at Marioni’s workshop, Kiley matured into the independent master who became his mentor's collaborator. During a telephone interview with the Glass Quarterly Hot Sheet, Marioni described his relationship with Kiley as a friendship rather than a student-teacher dynamic.

Although Kiley and Marioni have different technical and creative approaches to their work, they were able to successfully deploy divergent styles toward realizing singular objects. Kiley explores the configuration of each piece by fabricating a nexus between light and color in his cold-worked geometric forms, while Marioni devotes his oeuvre to painstakingly intricate patterns he then applies to ever-larger blown forms that push the scale and ambition of glassblowing’s technical limits. The Schantz exhibition showcases the unique fusion between Marioni’s pattern work and Kiley’s aggressive coloration and deconstruction of objects.

Over the years of his independent work, Kiley developed a distinct technique. His style is known for subverting the hard-won technical mastery that allows him to blow perfectly symmetrical forms. By implementing cutting techniques, he exposes hidden contours of the original hand-blown forms that he then joins, cuts, and polishes. His work pushes viewers to contemplate the form itself, revealing unseen interiors and bisected arcs that his compositions disrupt and confront

Marioni is recognized for his rich reinterpretation of classical Greek and Etruscan prototypes that overcome constraints on scale and surface treatment. Marioni’s precision murrine and reticello pattern work are among his stylistic trademarks.

Marioni said that there were few failures in the residency, no doubt a reflection of their longstanding association and shared dedication to skills and discipline. Kiley and Marioni have collaborated on multiple occasions, had have exhibited the results of their joint efforts at Chicago’s Ken Saunders Gallery (2017) and Seattle’s Traver Gallery (2019).

The Tacoma residency project emerged when Marioni and Kiley won the People's Choice Award at the Museum of Glass in 2019 after donating a collaborative piece to the Red Hot auction. Consequently, the institution awarded the creative duo a one-week residency at the museum hot shop. The project idea was to fuse Marioni’s patterns in the membrane of Kiley’s glass pieces. Two highly experienced glassblowers found it difficult to foster successful experimentation in the beginning due to the almost instantaneous process of combining Kiley’s two spheres with Marioni’s reticello core. While the critical process of attachment takes around three seconds, the pattern-making adds up to five full days to produce from three to six patterns in total.

When asked about the challenges working with his counterpart during a phone interview with Hot Sheet, Kiley described the work as “having two different ways of thinking,” he explained, “something that I learned during our collaboration is integrating new ways of thinking and new possibilities; working together was an opportunity to open my mindset and understand how something could be done and look differently.” However, one of the biggest challenges, according to Kiley, was producing the work in light of the pandemic. During this uncertain time, the artists were skeptical if they would be able to complete their residency. Kiley recalled that they finished the glass blowing part right before the governor declared the state-wide shutdown. To finalize their project, the artists had to maintain social distance while working together on cutting. Luckily, Kiley and Marioni were able to finish their residency before the spike of COVID-19 cases.

Marioni commented on the global health crisis with a sober observation that the glass industry in Seattle has been largely affected, meaning that the glass studios have been closed until further notice, depriving glass professionals of work spaces as well as taking away an opportunity from young people who show interest in the field. Marioni also noted the changes in glass commerce due to the economic climate affected by the business shutdowns.

In an email exchange with the Hot Sheet, Jim and Kim Schantz, the co-owners of Schantz Gallery Contemporary Glass, expanded on the exhibition:

“This body of collaborative works of Dante Marioni and John Kiley was set into motion about a year ago when we discussed the idea of an exclusive body of collaborative work for an exhibition with the artists. The sculptures were created over months of preparation, which began in Dante Marioni’s studio with his preparation of his distinctive cane patterns, then to the hot shop at The Museum of Glass in Tacoma where both artists worked with the team there...and, finally, to John Kiley’s cold working studio. We were able to help to support in part their residency at the Museum of Glass in Tacoma. This took place in March just before the museum had to shut down due to the pandemic.”

Despite the hardship faced due to the global pandemic, Schantz Gallery is largely supporting glass professionals. The new show is a celebration of an exemplary creative duet that joins form, pattern, and optics in consonance. The co-owners of the gallery commented, “the excellence of this work is a testament to their respect for the medium, as well as to their friendship. Each time they work together there is an evolution of ideas and technique, exemplified in this series through the  variation of color and patterns in the inner core, color combinations, and compositions in the cold working.” The series exhibited in the show consists of the accomplished experimental works featuring a harmonious bond between Marioni’s reticello fine patterns based in the central membrane and Kiley’s minimalist array of vibrant colors comprising the core. This stylistic and technical fusion allowed them to cultivate a distinct aesthetic serving as a testimony of their prolific collaboration.

Schantz Gallery is open to the public with limited access by appointment to ensure the safety of visitors and staff. If you wish to attend the exhibition, you can follow directions on the gallery’s website to schedule a visit or call the gallery.