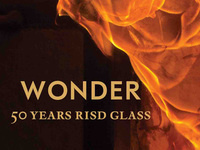 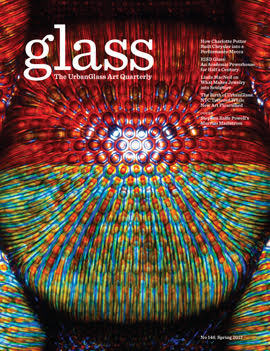 As part of a year-long celebration of the 50th anniversary of the glass department at the Rhode Island School of Design, the institution is publishing a book that both documents the history of its influential program and is also itself a work of intellectual inquiry. Titled Wonder: 50 Years RISD Glass, this book is an ambitious project authored by notable scholars and critics in the art world, many RISD alumni themselves. Their contributions not only serve as a commemoration, but stimulate inquiry and analysis in the way that the program itself encourages. The book will be released this month at a Seattle launch part at Dale Chihuly’s Boathouse on October 15th. It's a fitting location as Chihuly was RISD’s first full-time glass instructor, and has gone on to become perhaps the best-known artist working with the material. An East-Coast launch is scheduled at the Cooper Hewitt, Smithsonian Design Museum in New York City on November 13th.

Each contributed essay to the book is classified under one of five headings: wonder, alchemy, nature, science, or invisible/unseen. Along with the book debut, there will be a panel held on November 13th featuring contributors Gregory Volk, Jen Bervin, Stefanie Pender, and Jamie Carpenter. The glass program is notorious for employing its own graduates, creating an intriguing cycle of consuming and teaching to maintain the department’s ideology.

In the spring 2017 edition of Glass Quarterly, Samantha De Tillio noted the significance of RISD’s Glass program as an academic launching pad. “Their artistic prowess, combined with the widespread placement of RISD alumni in department head positions nationally, uniquely positions RISD Glass to significantly impact the state of glass in the United States,” she concluded.

The book was edited by Mass MoCA Curator Denise Markonish who is a part-time teacher in RISD’s department, Professor Rachel Berwick, the current head of the department, and Associate Professor Jocelyne Prince.

“The book was intentionally designed as an object that embodies the mutable nature of glass, a phenomenological experience of beauty and wonder,” said Markonish in a prepared statement. In the book, she writes that glass features a "vacillation between mundanity and magic" that she feels makes the art form worthy of discussion.

Also in a prepared statement, the book's co-editor Professor Berwick explained that “the notion of wonder that inspired the book’s title is at the very heart of the department. This publication is intended to celebrate that sense of wonder-and the slippery ground of knowing and not knowing-while highlighting themes that have sprung up at RISD over the years.”

Even the foreword of the book embodies the intended sense of wonder. “The etymology of the word alchemy is unclear- perhaps it was the Greek word khemeioa, based on the Egyptian word Khemia, which literally meant “land of black earth.” Or perhaps it is from the Greek word khymatos, which means “that which is poured out.” Or perhaps it is both.” The book goes on to draw open-ended questions, leaving the reader to ponder a multitude of possible answers.

The book’s subject matter seamlessly transitions from factual history to intellectual analysis. Contributor Frances Richard highlights the theme of the invisible/unseen through general examinations of abstract ideas. Her ability to subtly relate it to art is fascinating, and is a featured ability RISD Glass seeks to identify with as a whole.

Finding connections between unlikely things seems to be considered a crucial talent by RISD glass department. In her essay, Yuka Otani, another alumna, comments on the seemingly unrelated things in everyday life by writing “taking a very detailed look at those things may open up a new dimension to perceive the world.” The students are clearly encouraged to do so during their time at RISD, and this spirit of inquiry is being celebrated along with the anniversary as the driving forces behind the book’s creation.

Wonder: 50 Years RISD Glass can be purchased at risd.cc/risdglassbook.