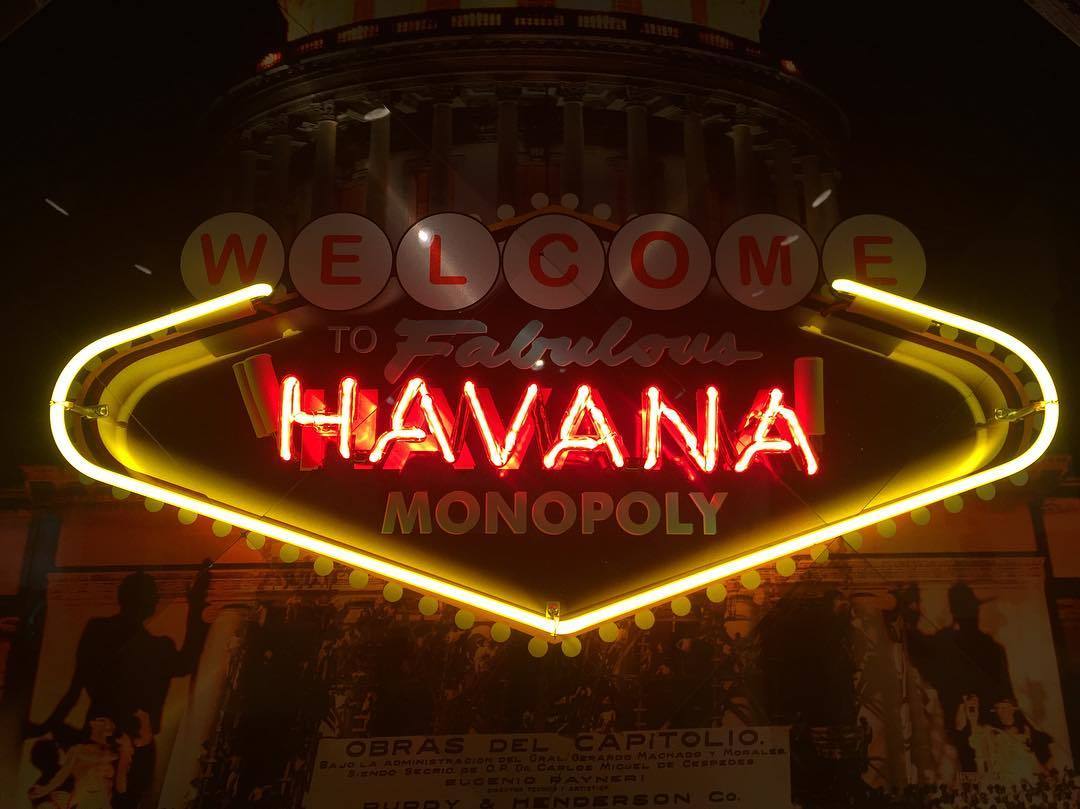 Before the Cuban Revolution in 1958, when Fidel Castro confiscated nearly all private property, Havana was a legendary playground for gangsters, American society types, and anybody who wanted to hang around to soak up the neon-lit ambiance of the city. Havana in the 1930s, 40s, and 50s was a tropical Las Vegas rival, known as much for its famous nightclubs, hotels, and restaurants festooned with radiant lit signs as its atmosphere of lawlessness.

Castro’s rule over Cuba changed that culture significantly, as the "decadent" era gave way to the seizure of private property by the state, and a turn away from anything identified as part of the overthrown capitalist regime.

A period of literal darkness followed. Most neon was simply switched off, and many of the signs that displayed brand names--such as Coca Cola or Chevrolet--were actively destroyed. Others decayed from lack of use. But all of that is starting to change, thanks to an initiative that has seen a partnership between neon artists and enthusiasts from both Cuba and America working actively to reclaim some of the pre-Revolutionary past, especially in cities like Havana, as the country experiences a political thaw. The neon-lit glow that defined an earlier era is slowly but steadily returning thanks to an international exchange.

Adolfo Nodal, a native Cuban, spent much of the 1980s and ‘90s restoring neon signs in L.A. professionally. In 2014, he began to focus his attention on his home country, where he joined with Kadir Lopez’s Habana Light Neon + Signs initiative in Havana, which has been restoring neon in the city sign by sign. Lopez, a neon artist, has already restored 50 signs in Havana at places like the REX theater and Fin de Siglo. Additionally, the group began a partnership with Let There Be Neon, a neon supplier based in New York City, in 2017, which has donated supplies, materials and expertise to the cause.

The Museum of Neon Art, located just outside L.A., also plays a large role in preservation and public education about neon art. They’ve been conducting neon tours of LA for the past 20 years, showing guests the bright sights in the city via double-decker buses.

The museum has now partnered with Project Por Amor to take a neon-centric trip to Havana, Cuba. The trip, scheduled from May 7 through 11, 2020, will be the museum’s first international venture.

Lynxwiler says the trip highlights the culture of Havana. In 2019, the city is celebrating its 500 year anniversary and a resurgence in arts and culture. Lynxwiler took a recent trip to Cuba with Nodal, and was fascinated with the architecture, the music, the food, the art and the people.

“What we discovered in talking to native Cubans was how much they love their city and culture, and how much they want to share it with the world,” he said.

The itinerary of the trip reflects this broad, cultural picture of Havana that includes more than the neon landscape: notable stops include a tour of Ernest Hemingway’s Cuban home, late night visits to local jazz clubs, and a meal prepared at a restaurant run by Fidel Castro’s former chef.

This experience allows for the added benefit of boosting to the Cuban economy and contributing to local artists and businesses there. Part of that comes through the trip’s partner Project Por Amor, which organizes trips in relation to the arts.

“The US and Cuba have always had a very close bond through arts and culture,” the Por Amor tour company's general manager Sage Lewis said. “It’s probably the one and only sector of society between both countries who has always had a very functional and positive relationship.”

The other purpose of the trip is to recognize and celebrate the restoration of neon art in Havana. The neon that remains is still commercial, but it has a distinctly Cuban appearance: signs light up the exteriors of diners, movie theaters and hotels. Even the art style is different from the flowy, cursive, primary-colored American neon. Lynxwiler describes Cuban neon as “bold and masculine,” using blocky fonts; he describes the colors as “tropical, dazzling to the eye,” often funky pinks and greens that clash in a visually appealing way.

This has created beautiful, well-lit parts of town and brought more neon artists to Havana.

“Neighborhoods are enjoying this miniature renaissance, seeing this neon coming back,” Lynxwiler said.

Attendees will get the unique opportunity on this trip to hear from both Nodal and Lopez about their work in neon restoration, and have dinner at Lopez's Havana home.

The price is $2,653 per person for double occupancy and $2,977 for single occupancy. This cost includes all expenses but airfare, tips, trip insurance and a few optional activities.

About 30 guests have already registered. There’s no limit on the number of guests who can attend, but Lynxwiler said they’re “hoping for a 40-person bus full.”

Lynxwiler and his partners hope to make this trip a unique cultural experience, showcasing the city of Havana and allowing neon art and signs to transport visitors into the past.

“I can’t wait to share this time warp of a city with people,” he said.

For more information, see the Museum of Neon's website.