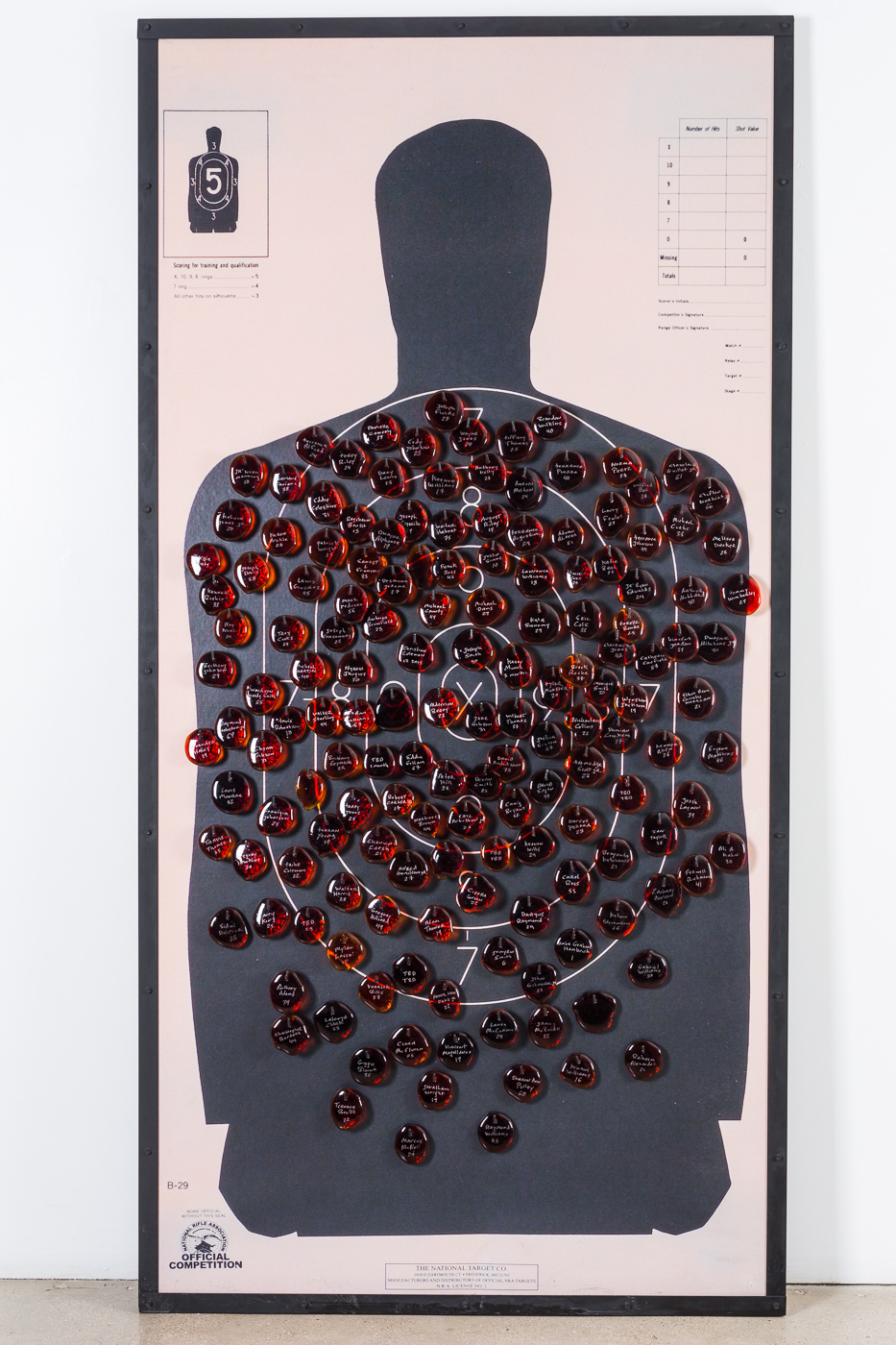 It's only June but there have already been 76 murders in New Orleans this year, according to the New Orleans Murder Map created by the local Times-Picayune newspaper. This city world-famous for food and music is also quickly gaining a reputation as one of the most violent in the nation with 157 murders related to gun violence in 2017, earning it third place behind only St. Louis and Baltimore in the grim FBI per-capita crime report. Glass artist and activist Mitchell Gaudet, who was born in New Orleans and who earned his MFA at Tulane, decided the gun issue in his hometown needed to be better understood and confronted through works that turned these statistics into potent artistic statements.

“I’ve been doing this for about four years now”, Gaudet told the Glass Quarterly Hot Sheet in a telephone interview. Every January since 2015, he's set up a guerilla art installation near New Orleans city hall that unveils the latest grim data on the number of lives lost to gun violence. For 2015 he arranged 164 cast-glass crying babies; for 2016 he had 174 broken-glass columns symbolizing lives ended too early; and, to count for the year 2017, he installed a larger-than-life body target, one you’d see most commonly at a shooting range, with 157 glittering red-glass orbs depicting the year's tally of gun-related murders. The name and age of each victim is etched onto the glass droplet to illustrate their blood spilled. His favorite part of the project is the conversations his installation elicit. "I thought it would be people asking me about the work, but then you hear their story, their experience with murder," says Gaudet. "And these are people just going to City Hall.”

These protest pieces, along with other poignant gun-related pieces such as teacher of the year trophies filled with spent AR-15 rounds and shooting targets depicting children with backpacks, are currently on view at his current exhibit, “The Shooting Gallery,” on display at Studio Inferno through September 1, 2018. 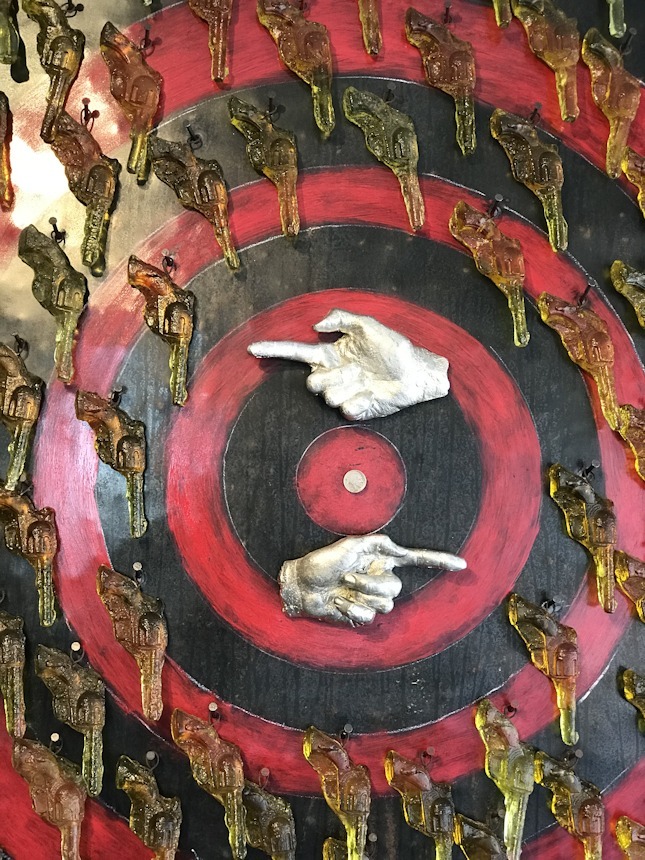 His motivation for putting together such an unsettling show was catalyzed by the sheer quantity of gun violence, including the Stoneman Douglas High School shooting in Parkland, Florida on February 14th. However, he tells the Hot Sheet “what pushed me over the edge was arming teachers. I was a captain in the army and I’m good with the Second Amendment… but I was the criminal element in my school, and to hear what’s going on and what kids and teachers are having to do is crazy.”

A tough art installation to see, his intention is to “show that more weapons is not the answer.” In just the time Gaudet began installing his show in April and the show's opening in June there were four school shootings, which only strengthened Gaudet's conviction to put this disturbing portrayal of gun culture up for the public. Guadet notices a “cavalier attitude toward murder” in our country that he hopes to address by shocking the audience. After creating works in response to gun violence for a while, he realized he had more work than he could fit in his own space, so he decided to curate a show in order to spark considerations to curtail the problem.

One of his favorite pieces is the Shooting Gallery (2018), which is a carnival style shooting game; however, instead of moving cans the figures are schoolchildren with their hands up. In addition to the technical aspect that he enjoyed designing, he appreciates how “it’s sinister in a playful way… People are uncomfortable whether they like it or not” -- an accurate statement that can be applied to the entire exhibit.

Although trained in stained-glass and blown-glass techniques, he prefers to work in sand casting, appreciating the texture it leaves that references the funky patina of New Orleans itself. The works displayed on shooting targets such as human figures and bullseyes are made in this method, which allows Gaudet to make multiples very quickly, a factor that is helpful when counting the rapidly escalating number of murders. His process avoids them looking machine-made: “they have a little funk,” as he puts it. Gaudet actively works against presenting glass as cut and polished in an effort to create a sense of raw authenticity. Despite this, Gaudet has noted a delayed reaction to his pieces. For example, the jewel-like quality of the glinting red droplets on the murder rate piece for 2017 pulls the eye in; “they’re very attractive and very pretty and then you realize [what they represent], and you get very emotional.”

Gaudet wants to contrast the gruesome content with the seductive quality of glass that is beautiful to behold in a push-pull between repulsion and attraction. “People get confused about it [glass]. [I’m] doing something more conceptual than just making them attractive blown forms... A lot of my work is message-based.” He is the first to admit that he is not the best glassblower, preferring to work in sand-cast glass work. However, he was fortunate to have kept these blown-glass pieces that he made almost 15 years ago. They are “big clear, simplistic almost test-tube looking things” that he has loaded with a mix of spent rounds, toy guns, and school supplies. The juxtaposition of these beautiful vases with its heavier, sinister content makes the viewer look again and question why such tools of violence are encased in a trophy aesthetic. 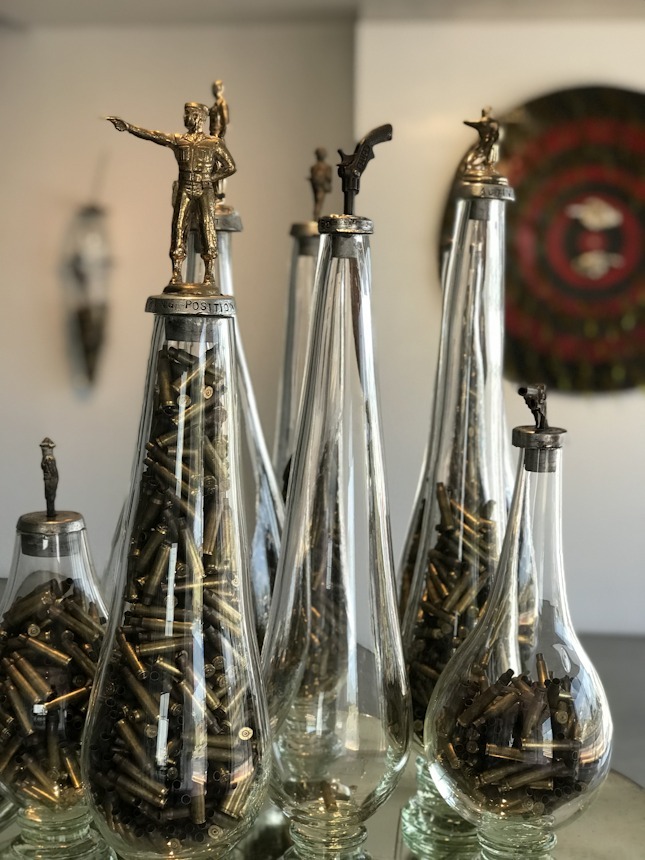 He plans to continue this work as long as nothing is done in response to the problem. He is considering incorporating photographic images into his glass work alongside interviews of personal stories. This year's murder count installation image to represent those individuals dead from gun violence is a leaf — a sand-cast glass leaf falling from a scythe.

There are 76 at the moment.