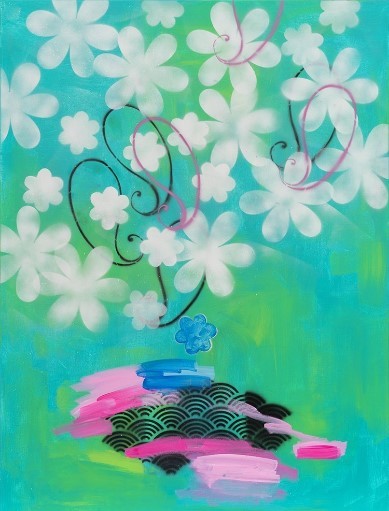 On view through August 25, 2019, at the Ed Paschke Art Center (EPAC) in Chicago, the exhibition “Lorraine Peltz: This Must Be the Place” investigates the multi-layered relationship between painter Lorraine Peltz and her late art-history professor husband (and prolific Glass magazine contributing editor). James Yood, who died suddenly in 2018, was a longstanding champion of Chicago artists working in many different media, and a prominent figure in the glass-art community, penning essays for numerous books in addition to his writings for this publication. He was also a charismatic professor at the School of the Art Institute of Chicago, where he taught for many years.

After Yood’s passing, exhibition curator Lela Hersh suggested the museum show an exhibition of Peltz’s work in his honor. Hersh worked closely with Peltz to curate an overview of the paintings she had done throughout her relationship with Yood, which are presented chronologically in the exhibition. The exhibition, which includes Peltz’s paintings alongside excerpts of Yood’s writing, brings a unique perspective to his legacy. In a telephone interview with the Glass Quarterly Hot Sheet, Hersch said, “I think it’s always interesting in understanding the life of a writer or painter to look at the work of the spouse, you can read a lot into the daily influences because they’re living their life together.”

Influenced by the pattern and decoration artists of the 1970s as well as the iconography of pop culture and advertising, Peltz’s paintings feature bright colors and a controlled, deliberate use of symbols. Flowers, for example, have always figured largely in her work, a choice inspired by the flower’s potential for metaphor as well as its history in art, from the still-life paintings of 17th-century Dutch women to the flower power movement of Peltz’s early childhood. Chandeliers also recur in the exhibition, drawn from Peltz’s early memories of a chandelier in her home. Other symbols of femininity and domesticity abound; “Time Out”, for example, features an X-shaped array of household objects, while “Kiss and Tell” sees two teacups perched beneath a playful cloud of flowers and lipstick marks. Perhaps the most poignant use of familiar images is found in “And It Was All Yellow”, one of Peltz’s most recent paintings. Yood brought Peltz a bouquet of yellow tulips the day of his passing, and they appear here amid an exuberant canvas of neon daisies, swirls and paint droplets. In her essay on the exhibition, Lisa Wainwright writes, “Here lies a symbolic cosmology of a life well-lived, but one inflected by the ever-present specter of its fleetingness.”

The works are autobiographical but also interested in broader ideas of memory, place and identity, especially in relation to gender. In a telephone interview with the Glass, Peltz said, “I was always interested in using the personal arena for a point of departure into a conversation about issues in the public arena. It begins with an intimate and sort of personal narrative, and then the work proceeds to incorporate the accumulated details of the multifaceted experiences of women in contemporary culture...Each painting is a very individual exploration of what it means to be a human being.”

Yood wrote about Peltz’s work only once, and his words are printed above the door leading to the exhibition: “We live, we love, we hurt, we lose, we regret, we deny, we forget, we surrender—this is the lot of life; it echoes in the paintings of Lorraine Peltz.” While Yood seldom critiqued his wife in writing, he frequently made visits to her studio to share his thoughts—“He wasn’t the type of person who could look at a work in progress, it had to be at the end and mostly finished”, Peltz remembers. In turn, Peltz often gave him feedback on his writing. Both teachers at Northwestern University, they constantly enriched each other’s knowledge of art through conversation.

In their time at Northwestern, the couple also knew the late artist and educator Ed Paschke, for whom EPAC is named. On display with Peltz’s paintings is an old note from Paschke to Peltz, wishing her luck on an exhibition. Yood was active within EPAC; at the time of his death he was scheduled to speak at an upcoming event, which was later cancelled.

Hersh says, “Jim was very interested in Chicago art in particular and supporting the home base, and he loved EPAC. He found it encapsulated what a city museum should be...he was very regional in his passion just like Ed was.”

Indeed, Peltz chose an exhibition title that included the word “place” because the idea of place was so significant to Yood’s writing. Yood believed that the choice of place, where one settles down, is the second most significant choice a person makes in their life, the first being their life partner. The exhibition is also named for the eponymous Talking Heads song, not only because Yood once bought Peltz a Talking Heads CD to play in her studio, but because the lyrics of the song resonate with Peltz as she reflects on their life as a creative partnership.