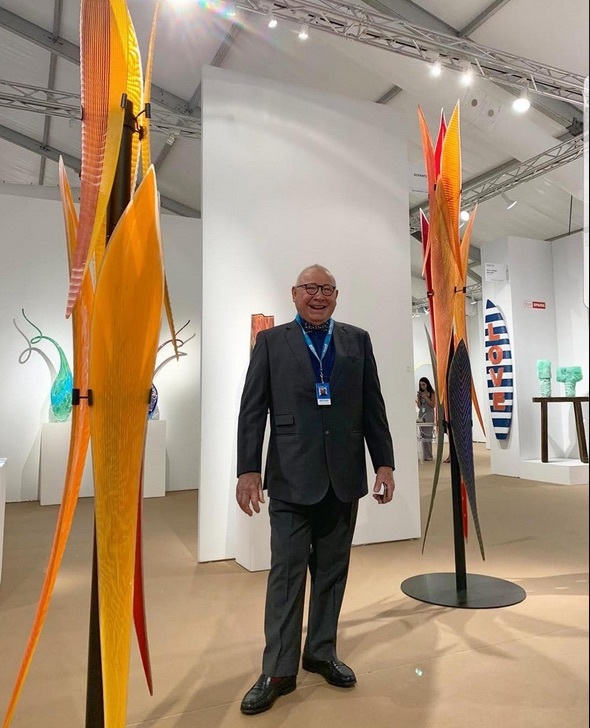 Lino Tagliapietra pictured in front of his new "Totem" series works that debuted at the Schantz Galleries display at Palm Beach Modern + Contemporary.

Palm Beach Modern + Contemporary, a Florida art fair that kicked off on the evening of January 9th and continues through the 12th, is the venue where Lino Tagliapietra chose to debut a radically different type of glass sculpture. Known for his unique fusion of Muranese tradition and American innovation, Lino has spent his long career pushing the boundaries of glass forms. Recent decades have seen his boat assemblages, large kiln-formed wall panels, rows of brightly colored and richly textured shield elements, and installations of falling glass leaves, to name just a few of the new directions he's taken beyond his myriad blown-vessel forms. Though well into his 80th decade, Lino's new "Totem" series marks fresh terrain, as it uses a metal armature to create tubes of abstractly patterned glass elements rising into graphically striking vertical tubes that clearly reference Native American totemic forms, but in an entirely Muranese visual language.

"I was inspired by a connection between the Masai forms, and the Native American totem pole," Lino told the Glass Quarterly Hot Sheet.

Two of the new freestanding and large-scale works grace the entrance to the Schantz Galleries display at the fair, where they are one of the few exhibitors to feature glass. The other is Hawk Galleries where the focus is on another Studio Glass innovator Dan Dailey.

The Lino exhibition at the fair is titled "La Dolce Vita," and features a wide range of the maestro's work that one can link directly to his 1979 first visit to the United States, when he taught at Pilchuck Glass School and recognized the adventurous and experimental spirit of American glassmaking that would inspire him to harness his technical virtuosity to the sense of freedom he felt in the "New World" of Studio Glass.