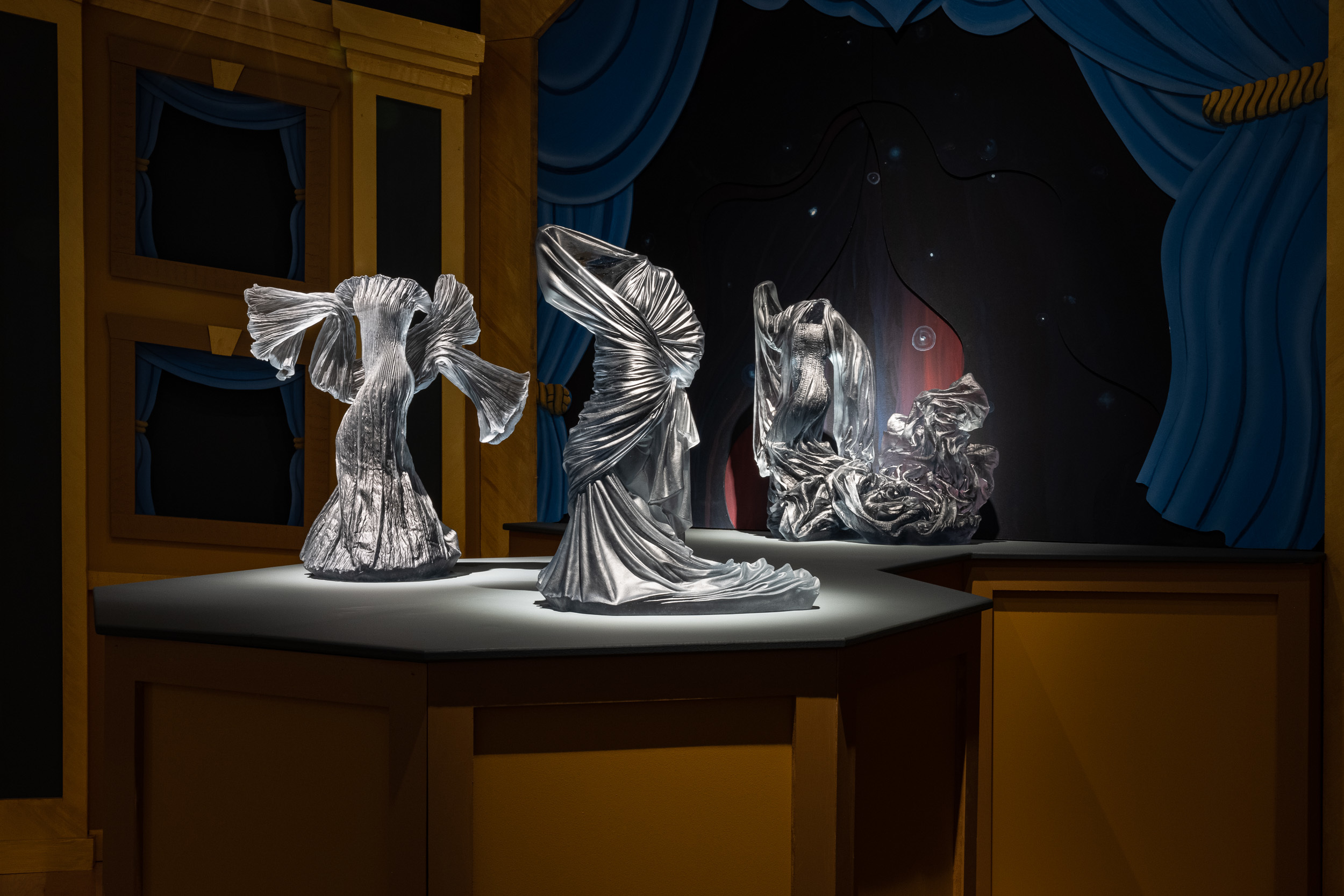 Having grown up in Manhattan, which many consider the fashion capital of the world, artist Karen LaMonte has always been interested in couture, particularly in female dress forms. It is not surprising, then, that LaMonte has made her focus as a sculptor in glass (and other media) the complex forms cloth can take on when draped on the human body in an extraordinary series of explorations, primarily through her series of life-sized cast-glass dresses. Well before New York City came onto the couture scene, Paris, France, held the title of world’s fashion center. It was during her research into one of her favorite French fashion designers, Madame Grès, that LaMonte stumbled across the Théâtre de la Mode, a little-known project which would serve as the catalyst for an innovative new direction in her own work.

Studying the history of French fashion led LaMonte to the post-World War II couture revival movement known as the Théâtre de la Mode. After the devastation of the international war, Parisian couturiers came together and created a traveling fashion showcase that would raise funds for war survivors and reinvigorate the industry as well the pride of the nation. For a fractured world that was rebuilding itself from the desolation of warfare, this show of beauty and cultural perseverance was especially important.

As the world faces yet another potential surge in the ongoing Covid-19 pandemic, an unprecedented worldwide threat to human life, LaMonte has chosen to present the world with a new Théâtre de la Mode, one that keeps with the spirit of the original and offers a contemporary connection to that same beauty and resilience in the face of a global tragedy. It's also fitting that LaMonte would find a connection in the career of Madame Grès, a  sculptor turned fashion designer who used the medium of fabric to emulate Greek sculpture.

For the epic Théâtre de la Mode project, LaMonte worked with the director of the museum, Charlotte Potter Kasic, and numerous collaborators from the Old Dominion University (the campus on which the Barry Art is housed) campus and local community.

Kasic, with whom Glass was able to do a virtual interview, was kind enough to share the story of her and Karen LaMonte’s unique relationship as well as the details of the collaboration that went into crafting LaMonte’s Théâtre de la Mode. We were also able to have email correspondences with Karen about her recent exhibitions.

Kasic and LaMonte themselves had long been acquainted as glass artists and at one point, Kasic was supposed to work as LaMonte’s studio assistant, but fate would not have it so their paths did not converge so cleanly. Another decade passed before they were to cross paths again, this time when Kasic organized for LaMonte to do the virtual presentation for the Barry Art Museum. Fast forward another ten years to the opening of the Théâtre de la Mode, where the two met face to face for the first time. Almost beside themselves with the emotion of it all, both women recalled their first meeting as an explosive moment that had twenty years of build up behind it.

Though Kasic serves as the director for the Barry Art Museum, she was not the only influence on the Théâtre de la Mode, with multiple departments from the ODU as well as architects and other craftspeople coming in to provide their services to bring the whole project together. LaMonte herself named the virtual talk as the impetus for the project with Kasic making the initial connection, “After the presentation, I was talking with Charlotte, and she let me know that the Barry has quite an extensive collection of early Fashion dolls. I had always wanted to have a show that focused on the Etudes and the story behind them.” Through Kasic and LaMonte’s combined vision, the histories of the Etudes and the Barry Museum’s fashion dolls were combined to create the Théâtre de la Mode.

LaMonte went on to hand-sew her own dresses that she would use to mold and model her glass works after. Presented in a chronological order, the exhibit features a timeline of fashion dolls that ends with LaMonte’s own works serving as a contemporary companion to the existing collection of dolls at the Barry. The exhibit also features Karen’s works situated in ornately designed small-scale sets that were directly inspired by photographs of the original French set pieces from the 1950’s. The absence of human figures inside the glass couture clothes imbues the collection with a certain ghostliness that reflects the loss of life and contact that the pandemic has brought with it. If nothing else, this exhibition serves a testament to the very human need for connection, empathy, and healing through art.

The fact that this entire process took place during the pandemic with LaMonte located in Prague and Kasic in Virginia, the amount of people involved, and the numerous moving parts of the project, is a testament to the dedication of the artist to her craft. Kasic was quick to praise LaMonte’s generosity and willingness to pick up the challenge at a time when people were struggling to just put food on their tables. LaMonte herself also raved about the collaborators and reflected on the experience of curating this show during the pandemic: “The real stars are the ODU theater department: they were absolutely game to jump in and did an enormous amount of work. And, somehow we managed to do this all remotely during a pandemic!”

About her glass working process, LaMonte listed inconsistency and overconfidence as her two biggest obstacles, advising that one must always check and double check the mold material, the kiln firing, and every small detail of the casting process. Her signature style of glass working results in creations that mimic movement, whether it be in her dress forms or in other works, like her more recent cloud explorations. About her new direction in creating, she said, “I have always been fascinated with weather — clouds have been part of my artwork since college. I want people to have an intuitive, unmediated, personal relationship to my sculptures, which is why I work with universally recognizable forms like the body, clothing and clouds.“ She began working with scientists from CalTech and NOAA on sculptures inspired by weather and atmosphere in 2017 and is currently developing this project further.

Editor's Note: This article originally appeared with the statement that Karen LaMonte grew up on Park Avenue in New York City. She actually grew up on the Lower East Side of Manhattan. The Glass Quarterly Hot Sheet regrets the error, which has been corrected.