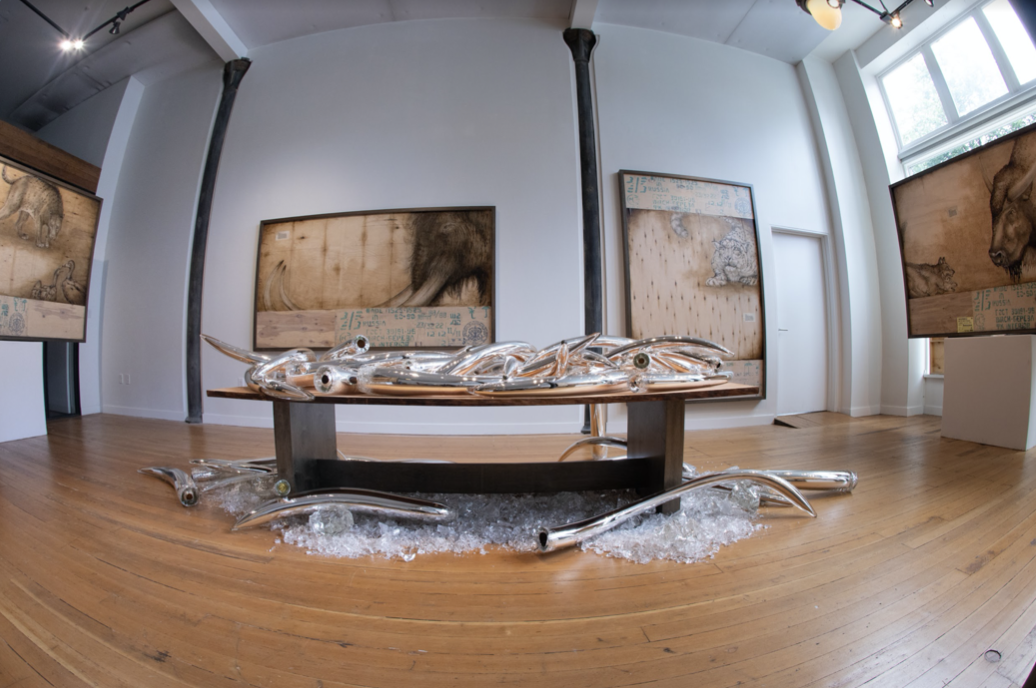 Humanity has a complex history with animals. Over millennia, our role has shifted from prey to rivals, from hunters to domesticators. Since ancient times, humans have looked to animals as symbols of mystery and power, but now we are aware of another dynamic in our longstanding relationship --  as humans have driven some species to the brink of extinction, and we recognize we are both destroyers and protectors. Ivory .125 is an ambitious installation by Joseph Rossano, an American glass artist. Curated by Benjamin Wright, the artistic director of Pilchuck, it explores these patterns of human behavior as viewed through fossil records.

Staged at Pilchuck’s Seattle exhibition space in a partnership with Traver Gallery, the online-only exhibition title Ivory .125 signifies one-eighth of a journey to the project’s completion. Sixty life-size glass blown tusks represent nearly one-eighth of the total number of elephant tusks illegally harvested every day. The portraits painted in tar on wood panels featuring endangered animals and those that already have gone extinct serve as a somber reminder of human power and its devastating effects.

“This exhibition was an opportunity to open up our space for the glass artist, Joseph Rossano, who has an extensive history with the school,” Wright told The Glass Quarterly Hot Sheet in a telephone exchange. “The project Ivory involves a number of scientists, anthropologists, and archeologists, so my role as a curator is to aesthetically and conceptually pull those threads together,” Wright noted. The project’s goal is to visualize the human role in extinction, aiming to engage scientific as well as artistic audiences. Ivory is a long-term project that can be envisioned in spaces, like natural history museums as well as art venues. While Pilchuck is unable to host public events due to the COVID-19, Wright proposed an alternative to conduct a series of interviews, talking to a number of scientists and anthropologists involved in this project, with the plans to hold a digital panel in the upcoming future.

“We treat animals as if they are less important than humans,” says the artist, Joseph Rossano, in a telephone interview with the Hot Sheet. “My project takes a look at how animals have gone extinct. As an artist, I make things that represent animals and reflect some level of how we devalue each other.”

The project is built on the foundation of extensive research, involving scientists from around the world, “When you walk into the gallery, all I want to do is to tell a true story, and the only way I was able to do it is by working with experts,” Rossano observed. By linking Pleistocene Overkill, overhunting of megafauna, to a direct cause of animal extinction, the artist reveals the truths about humans’ impact on nature. The goal of the project is to suggest: how do you look at the past and use it as a lens into the future?

Rossano envisions the project as an exhibition space where the audience could contemplate appealing visuals and deeply reflect on human impact. “You walk into the room and there are 300 plus pieces of ivory and other artifacts. On the walls, there are portraits painted in the tar of animals that are extinct. In the silver tusks, people can see reflections of themselves. This is all about us: the people,” Rossano explained. Eventually, the artist hopes to complete 400 plus pieces of ivory to accomplish the groaning visual weight of tusks in the exhibition space.

Another theme the project explores is the illegal ivory trade, its causes and effects serving as a glimpse into human valuation of nature. People can always justify their behavior, rationalize why something is acceptable by translating it to personal and collective opinions. Rossano refers to this phenomenon as a consistent pattern of behavior regardless of the time period, “Even though we might think we are smarter than two thousand years ago, we are not. The ivory trade is illegal and we have had to pass the laws to try and stop the rate at which it was going. People want to own precious animal parts to show their power just like their predecessors.”

However, there are groups of scientists, such as contemporary conservationists, who are working diligently to battle animal extinction and protect the vulnerable species from being used for the illegal ivory markets. On the mission to battle animal extinction and research harmful influences of human presence, Rossano aspires to spark a conversation: “The earth is incredibly complex, an interlocking set of systems. I think that humans poorly understand the world we live in. I believe a project like this will get people talking together through various ways of examining the world.”