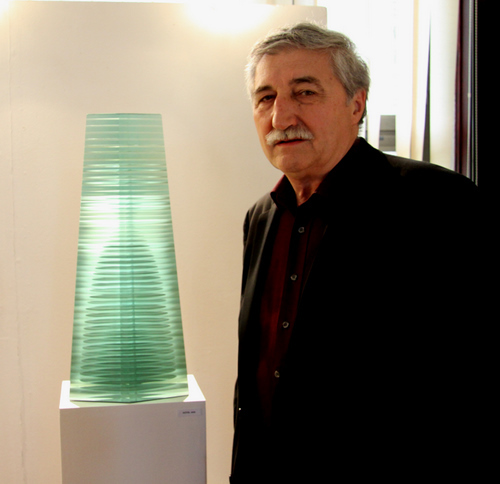 Zoltan Bohus, a Hungarian pioneer in the field,  died of complications due to cancer on November 24th, 2017. He was singularly responsible for establishing glass art in Hungary, and quickly rose to international prominence for his architectonic sculptures of cold-worked glass or remarkable power.

Bohus came into contact with glass during his college years, and actually received a degree in decorative painting from Hungarian Academy of Applied Arts in 1966. He was instructed to use glass by a professor he was assisting, Gyorgy Z. Gacs. His talent for cold-working glass, inspired by the clean, constructive style of minimalist art, quickly earned him notice.

The faith Professor Gacs had in Bohus is said to have fueled the young artist's early success. Bohus was able to collaborate with an architect upon graduation and his glass sculptures were well received, and even inspired countless architects with whom he continued to collaborate and maintain a creative relationship throughout his career. To name a few, he created an embossed stainless steel frieze for the interior of an office building in Sopron in 1969, and, in 1972, the glass wall he designed and created in collaboration with Ágnes Horányi was erected at the József Attila Museum in Balatonszárszó.

In 1975, the Lectorate of Fine and Applied Arts invited Bohus and Tibor Csiky to create a sculpture for the facade of a building that today takes the form of Szervita Square. Through an inside source overhearing a conversation, it was revealed that the intent of several people behind the invitation was to turn the two artists against each other. Upon learning this, Bohus and Csiky submitted a joint application with the pieces under both their names. This humorous account speaks volumes to Bohus’ attitude toward his art—an honest, wholeheartedly inclusive one.

Csiky continued to artistically collaborate with Bohus and his wife, Maria Lugossy, throughout their careers. The three of them founded a revolutionary sculpture division established at the Győr workshop in 1976. Artists János Fajó, István Haraszty, Antal Lux, Ádám Misch and István Nádler later joined them in this effort. They worked together according to the principles of minimal art, using simple, primary forms. The industrial background of the location, Győr Rail Wagon Factory, inspired them to use industrial materials—metal sheets, hollow sections, pipes; the factory supplied them with an unlimited supply of of metal, proven by research done by research of Júlia N. Mészáros. This time period is relevant to Bohus’ career in its entirety. He is notorious for having had started out from the possibilities offered by the basic material and its geometric form, and constructing pure, logical systems. He used geometrical systems to illustrate matter, space and time, designing his small sculptures with an engineer’s precision.

Although it's what got him started, Bohus' use of the cold working method appears mostly in his art from the 1970s. Also in the 1970s, a piece from his "Spatial Spiral" series was chosen to be showcased in a traveling American exhibition. Spatial Spiral II was listed among the 10 best sculptures in one of the most prominent American trade magazines of the time, Craft Horizons. This was the first time Hungarian glass art was presented as such an important international context.

Bohus’ career was on the rise ever since. Author Katalin T. Nagy in a biography of Bohus, writes that his artistic attitude “sought order and harmony” with the intent of creating a pictorial effect and meaningful symbols. The arts writer refers to this as his "masculine lyricism," that became stronger as his career went on. “He always sought ways to smuggle a lyrical thought into a purely geometric idea,” writes Nagy. The key to expression was appropriate interplay, namely, the interplay of light and the horizontals and verticals that accrue to form the mass and effect of Bohus's works.

Bohus made many contributions to his home glass community, including founding the Hungarian Art Glass Society. His architectonic laminated-glass works can be found in the permanent collections of international museums such as The Corning Museum of Glass, the Hungarian National Gallery, the Musee Des Beaux-Arts in France, the Musee des Arts Decoratifs in Switzerland, and the Yokohama Museum in Japan. Among the many hats he wore, he became head of the glass-design department at the same university he studied and discovered glass. Between 1993 and 2010 he was a professor at Moholy-Nagy University of Art, where he headed the glass program as well.

The first time Bohus collaborated with an architect for the project assigned by Professor Gacs, he chose to create a gate inspired by the gate relief of the Rákoskeresztúr crematorium. He resurfaced the gate theme into the early ‘90s. His work The Gate of Gods “makes it clear that the artist wants to enter imaginary spaces hidden from the eyes of humans, interior spaces that can only be created by imagination and artistic will.” (Nagy).

For the years to come, Bohus continued to transform the glass community, delving in and out of, surfacing and resurfacing his different concepts behind and approaches to his works.

In the early 2010s, Bohus chose to feature landscapes in his works. He recreated landscapes in the early 2000s as well, but their return and permanent presence of landscape elements in his work is thought to have been caused by the tragic death of his wife Mária Lugossy caused by an illness in 2012. The slopes and valleys in the work could be observed as hidden references to the body, the details of the curves of the female body, fragments of memories conjuring the image of the lost lover; at the same time, they could also be analyzed at a surface level as the artist’s views of the world. Lugossy, a collaborator with her husband and master of glass in her own respect, had a certain feminine quality to her works. She often featured motifs of birth, motherhood, and nature.

"Bohus and his wife Maria Lugossy were the leading couple working in glass in Hungary, putting that country on the map in terms of Studio Glass," writes former Corning senior curator of modern and contemporary glass, Tina Oldknow, in an email exchange with the Glass Quarterly Hot Sheet. "Both were influential teachers and role models for young artists. The lack of hot-glass facilities originally propelled them toward the sculptural exploration of flat glass, and the discovery of new forms for the material through stacking, bonding and rigorous cutting, grinding and polishing. Lyrical and mysterious, Bohus’ sculptures reveal the potential of one of the most ubiquitous types of glass to move from the ordinary to the extraordinary. Bohus and Lugossy survived by their three children.