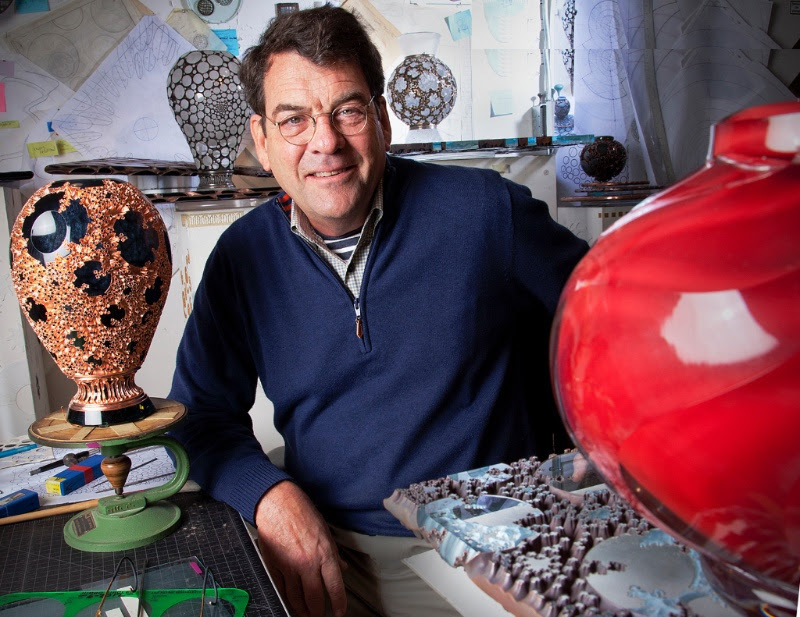 Artist and educator Michael Glancy died of complications of lung cancer last Saturday, August 29th. 2020. He passed away at the age of 70 at his summer home in Harwich Port, Massachusetts. He is survived by his wife of 43 years, Robin Stengel Glancy; his son Michael Glancy, Jr., daughter-in-law, Elizabeth Little Glancy of Baltimore, Md., and his beloved granddaughters Ella and Mae; as well as his son Robin Peyton Glancy.

Born in Detroit on February 11, 1950, Glancy first studied business at the University of Denver, where he found himself drawn more to his elective courses in ceramics and filmmaking. He changed his major to fine art, and graduated with a BFA in 1973. He first encountered glass in Santa Fe, New Mexico, and built his own hotshop soon after. A chance encounter with Dale Chihuly during a visit to the Native American Taos Pueblo community had him apply for graduate studies at RISD, where Chihuly headed the glass program. Discovering a little-used lab in RISD's jewelry department, Glancy stumbled upon electroplating, a metalworking technique of using electricity to apply precious metals, which he incorporated into his glass practice. This would come to be his preferred method prefected in his four-decade career as a sculptor. Alongside the late Howard Ben Tre, Glancy graduated from RISD in 1980 with his MFA, and soon rose to prominence as part of the Studio Glass movement.

Glancy has been represented by many of the top galleries in the field, including Barry Friedman Ltd. and Heller Gallery in New York City; Habatat Galleries in Royal Oak, Michigan; Galerie von Bartha in Basel, Switzerland; and the Clara Scremini Gallery in Paris. Glancy’s work can be found in major museum collections such as the Metropolitan Museum of Art; the Museum of Fine Arts, Boston; the Smithsonian American Art Museum's Renwick Gallery; the Detroit Institute of Arts; the Los Angeles County Museum of Art; Musée des Arts Décoratifs Palais du Louvre; the Victoria and Albert Museum; and the Hokkaido Museum of Modern Art.

According to an online obituary posted by his family, condolences are best sent via the artist's website: michaelglancyglassworks.com/contact