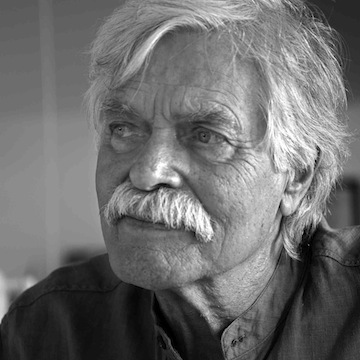 Klaus Moje passed away in Canberra on September 24, 2016. He is remembered with great fondness by family, friends and colleagues throughout the world. His passion for glass and commitment to sharing its inspiration created bonds that stretched over decades, from his early years in Hamburg, through the heady experimental 1960s and 70s, and on to generations of emerging artists who have pushed the medium beyond all expectations. He will be remembered as a great artist who led by example, setting high standards for himself and always seeing the best in others.

Klaus spent the first twenty or so years of his career based in Hamburg. By the early 1970s he was becoming familiar with American developments that would later play an important part in his own work: the establishment of Pilchuck, and emerging specialist galleries such as Habatat and the Contemporary Glass Gallery (later Heller).  Klaus clearly recalled his first sight of work by Dale Chihuly in a 1971 window display at the then Museum of Contemporary Art on 53rd Street.  He made his first trip to the USA in 1972 and first taught at Pilchuck in 1979. Klaus remembered Pilchuck as a place of vigorous international exchange and experiment to which he was often drawn back over many years. There was an energy in American glass that Klaus was quick to recognize and promote, using his own Werkstatt Galerie in Hamburg, established with his first wife Isgard, to introduce American artists to Germany.

By the early 1980s Klaus had already featured in three solo shows: in Hamburg, Frankfurt and Berlin. He had begun to focus solely on his kiln formed mosaic work, exploiting the rich world of vibrant color which would remain his life-long passion. At this stage Klaus used cane rods made at Hessen Glasswerke originally designed for use in the domestic button and jewellery trade – one of his own innovations which allowed the saturated colour which at times shocked European taste.  Despite this, or perhaps because of it, Klaus’ work gained in reputation: the Metropolitan Museum of Art acquired its first Moje piece from a show at Heller in 1979.

The early 1980s were also years of immense creative output for Klaus, buoyed in 1983 by the potential offered by the new compatible glass formula created for him by Bullseye: first used in  Klaus’s "New Horizon" series in 1983 . One further major change was his move to Australia to establish the Canberra Glass Workshop, where he remained as head for the next 10 years. Over that time Klaus built the School into a major centre whose students now enjoy their own international reputations. Klaus’s insistence on establishing links with international artists saw exchanges and workshops whose legacy continued on in later years: the Latitudes workshops and exhibitions and the Great Australian Roll Up projects led by Australian artists Kirstie Rea and Scott Chaseling were two examples which toured the States.

Following his tenure at the ANU Klaus and his wife ceramicist Brigitte Enders established their joint workshop at Wapengo, a rural property on the south east coast of New South Wales. From there Klaus continued work at a renewed pace, producing series ranging from the free gestures of the Ebeltoft series, through the finely tuned patterning of the Niijima vessels and the tightly controlled graphics of his geometric abstractions. From the late 1990s Klaus turned to the large wall panel format, with its most famous example, Choreographed Geometry (the Portland Panels) now featured in the new contemporary wing of the Corning Museum of Glass.  In his last pieces Klaus continued to explore the potential of wall pieces, bringing the focus down to intricate three dimensional patterning built up through intersecting layers of mosaic.

For every friend and colleague there will be a multitude of memories of how Klaus has touched their lives, from a dedicated teacher and mentor, to one who loved a good meal with friends, enjoyed a chance to scuba dive, to share a glass of German beer, give support whenever needed and be ready to fight for what was important.  He will be greatly missed.

Klaus is survived by his wife Brigitte, and his children Amos, Danilo, Jonas and Mascha.

Editor's Note: Nola Anderson is an arts curator and writer who is writing a book on the life and work of Klaus Moje.